Washington’s eight is the one 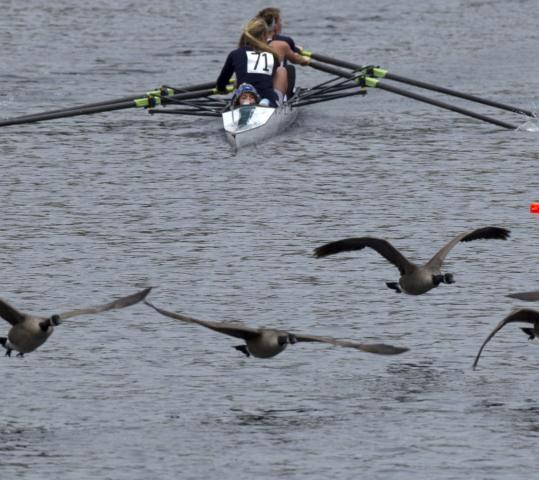 The Duxbury Bay youth four was forced to share the Head course with a flock of geese. (Jay Connor/For The Globe)
By John Powers Globe Staff / October 25, 2010

Their rowing year began here last year when Washington’s crew caught a nasty crab along the powerhouse stretch and lost its men’s title to the Great Eight (a.k.a. Tideway), a group of intergalactic scullers who decided to take on the big boats for bragging rights. Its collegiate year ended with a maddeningly close loss at the IRA championships to the boys from Berkeley that ruined an unbeaten season.

The Head of the Charles may come in October but this month is the January of the sport, the time when oarsfolk look both backward and forward. So the purple people from Seattle came here craving a victory that would both finish and start things properly.

“A lot of coaches say they’re just here to have fun, but this meant something to us,’’ said coach Michael Callahan. “We came here to win.’’

And so the Huskies did yesterday afternoon, mashing down the accelerator for most of the 3-mile upstream course and reclaiming the title by less than two seconds over a Harvard varsity that had its best showing since its 1977 victory.

Uncle Sam’s eight has dominated this event during the last 16 years, winning the crown 11 times. But with the world championships in New Zealand beginning this week, US Rowing sent a hybrid B team for the men’s event and no boat at all for the women’s race, which the national team had won five times in the last nine years. That opened the door for the American collegiate eights, who hadn’t cashed the daily double since 1979, when Princeton’s men and Wisconsin’s women prevailed.

“I wasn’t sure that we would win it,’’ said Princeton coach Lori Dauphiny, whose 2000 varsity was the last campus boat to claim the women’s crown. “But I thought it was an awesome opportunity.’’

So the Tigers, who’d finished sixth last year and third at the NCAA championships, pounced on their chance and beat Virginia by more than eight seconds and Brown by nearly 10 in 15:48.314. “I’m thrilled with excitement and pride over their performance today,’’ said Dauphiny.

Almost always, being the first college boat across the line is a consolation prize here. This time it was everything, and the old-school flavor of the championship fields added particular spice to the day. California and Washington, who’ve had at each other for more than a century, started first and second on an afternoon that came up surprisingly calm after last year’s snowflakes and bluster. “We bring out the best in each other,’’ said Callahan.

All the Huskies needed to get the adrenaline pumping was knowing that the Bears were a few seconds upstream. Despite what Callahan called the “misadventure,’’ his boat finished less than a quarter of a second behind Cal last year. So they were prepared to go into overdrive straight out of the chute this time. “Between the starting line and the Weeks Bridge we told people it was a drag race,’’ Callahan said.

A head race, though, is determined by elapsed time and the crew to beat hadn’t even started when the West Coast rivals were off and running. Harvard, which traditionally doesn’t put its best oarsmen in the same eight, was starting 15th based on its finish last year.

This time, though, the Crimson had all seven returning oarsmen from last year’s Henley champions in one supercharged boat. “It’s unusual to have seven guys coming back,’’ said coach Harry Parker, whose sophomore boat finished ninth and whose program won the points trophy. “So it made it a pretty easy decision.’’

By the time Harvard got to the Cambridge Boat Club, roughly a half-mile before the finish line, it had the fastest time by nearly two seconds. But there was traffic up ahead in the form of Navy, the Brown alumni, and the Penn AC, the natural hazard that comes with starting in the middle of the pack. The Crimson nearly made it through cleanly, but ended up clashing oars with the Philadelphia club after they’d already gone by, and lost precious time.

By then Washington was already well upstream, having cranked up to 40 strokes a minute for the closing stretch. “We couldn’t see Harvard,’’ said Otto, who captained last year’s varsity. “We were in our own little world.’’

The Huskies’ only question was whether they’d broken the course record, and for a few minutes they thought they had based on coxswain Valaree Fowler’s GPS. When the clock said otherwise, their coach high-fived Pete Cipollone, who’d coxed the 1997 boat in which Callahan had rowed bow.

“I told the guys it was the perfect scenario,’’ said Callahan, whose boat had benefited from a tailwind that year. “We won but they didn’t break our course record. I felt like we were like the [1972] Miami Dolphins, who always celebrate the unbeaten season.’’

So did it come around for the Huskies, who ended one year and began the next in triumph.