Alumni group has a lot of class left 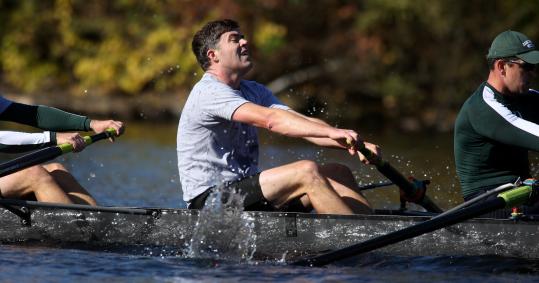 During their first practice on the last week, a rainbow appeared behind the boat.

“We took that as an omen,’’ said Ted Murphy, whose last ethereal experience on the water was when he won a silver medal at Olympus a decade ago.

It had been 18 years since the greatest Dartmouth crew to ever grip an oar had pulled together, but from the moment they came back to campus last Thursday and took their first practice stroke, there was a familiar magic in the boat.

“It was perfect,’’ said Scott Armstrong, who coached the 1992 heavyweight varsity in person then and by e-mail this time. “As if they never left. They were flawless.’’

The question was how the Ever Green, as they call themselves now, would fare in yesterday morning’s men’s alumni event at the 46th Head of the Charles.

He and his seatmates had dropped a collective 120 pounds, worked out in small boats, and pulled at ergometers to satisfy what Fred Malloy called “this insane midlife crisis.’’

Were they going to be “Dartmouth Oarsmen Regaining Killer Status,’’ as Malloy puckishly suggested? Or would they be DORKS?

“They had a lot of emotion there,’’ observed Armstrong. “They were nervous. I was nervous.’’

But as soon as coxswain Mark Hirschey steered them out of the chute for the 3-mile upstream pull, the rhythm and the romance returned.

“Exactly as it should have been,’’ declared Nick Lowell after Ever Green had finished second behind defending champion Northeastern by three seconds, with time adjusted for their advanced age. “Exactly how we wanted it to be.’’

This was no reunion buddy boat getting together for a nostalgic paddle together before drinks, dinner, and diversion.

“The idea wasn’t to do a rowover for old-times sake,’’ said Murphy, a West Newton native who flew in from the Bay area. “We wanted to win the damn thing.’’

That’s how Dartmouth went after it in 1992 when it had an unbeaten regular season, won the only Eastern Sprints crown in school history, dead-heated for the IRA championship, lost to Harvard by a bow ball at the Cincinnati nationals, and went to Henley.

No Green boat has ever come close to matching that accomplishment, and yet the memories were bittersweet.

After the Green and Navy hit the IRA finish line together, Pennsylvania claimed that the wake from an officials’ launch had disrupted it near the finish, and the regatta stewards belatedly declared a three-way draw. At Cincinnati, Dartmouth came from behind and nearly caught the Crimson at the end, missing by less than three inches. “Just a case of who got that last stroke,’’ Murphy recalled.

Going for the Grand Challenge Cup, Henley’s biggest prize, the Green unluckily drew the Penn AC, which was made up of US camp oarsmen who hadn’t made the Olympic team for Barcelona, and lost by half a length in the rain. “They took their anger out on us,’’ Malloy said.

That was the last time the eight had been together until they got the idea to reunite for the Head, which added an alumni event last year.

“It was a good excuse to get the band back together,’’ figured Murphy.

Hirschey, who had been their on-water conductor, wasn’t so sure.

Their average age was 39 by now, they had wives, children, jobs, and they were scattered from Boston to Portland, Maine, to Milwaukee to San Francisco to Seattle to London. But once they were in — stroke Dave Dragseth, Jeremy Howick, Sohier Hall, Jon Paine, Phil Kerr, Murphy, Lowell, Malloy, and Hirschey — they were all in, as always.

“I have zero doubts that Dave will lead us through the gates of Hell on the way to Heaven,’’ Howick vowed in a group e-mail.

The Charles has seven gates between start and finish, and Hirschey guided his oarsmen through them all yesterday with deft tiller work. Finishing between Northeastern and a younger Ever Green entry made up of former Dartmouth aces undeniably was rewarding. But more deeply satisfying was picking up where they’d left off on a Thames River dock 18 summers ago.

“To be in a boat with our brothers,’’ Malloy reflected. “No matter how we did, we felt like winners.’’

Going back to the New Hampshire hills last week was nearly spiritual for them.

“Not many better places to row when it’s unfrozen than the Connecticut,’’ testified Murphy, whose colleagues still were dodging ice floes in the spring during their undergraduate days. That was where their odyssey began, where the 1992 varsity first realized that they might be champions.

With time, they’ve come to savor the mixed memories of that bygone season.

“Our final two races were really hard to take,’’ Murphy acknowledged. “But with benefit of years comes an appreciation that, wow, that was something special that we did.’’