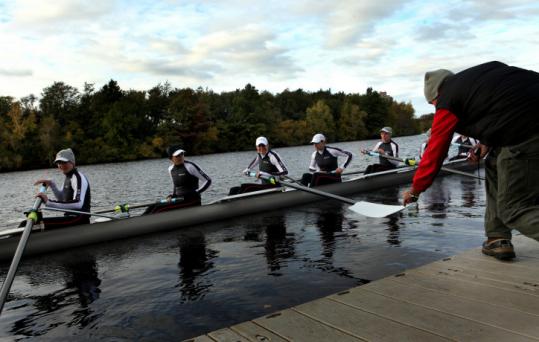 The Great Eight, a women’s international all-star boat, hit the Charles River Friday for its only practice session together. (Michele Mcdonald/For The Globe
)
By John Powers Globe Staff / October 18, 2009

They describe themselves as the Yin and Yang of American rowing. Susan Francia is 6 feet 2 inches, Erin Cafaro is 5-10. Francia was born in Hungary, Cafaro in Modesto, Calif. Francia went to the University of Pennsylvania, Cafaro to the University of California. They’re the most unlikely pair since the Odd Couple.

“But somehow whenever we rowed together it would always click,’’ Cafaro says. “It was kind of dumbfounding to both of us and everybody else because we’re such different sizes, have such different strokes. We always ended up being one of the fastest boats.’’

This year Francia and Cafaro were the fastest in the world, pulling off a historic double at the global regatta in Poland. After becoming the first US pair to win the gold medal, they jumped into the eight and helped propel the Americans to their third straight title.

This afternoon, they’ll take the line at the Head of the Charles in the women’s championship event as part of the Great Eight, an international all-star boat that will challenge the US and Canadian national crews.

While they’re household names among rowing’s international family, Francia and Cafaro didn’t have much public visibility in the States until Francia posed nude dockside for ESPN Magazine’s “Body Issue,’’ which featured other athletes as well.

Not that she was aware that she would be out of uniform.

“I did not know that it was going to be naked until the day of the shoot,’’ Francia said. “I knew it was bodies. I thought I’d be in a bikini or something or Spandex.

“It was a big miscommunication there, but I went with it. ‘OK, that’s the theme? All right.’ I knew it was going to be tasteful and I knew that I was in charge of my own pictures. I wanted something that was athletic and beautiful, to show that rowing is a beautiful sport and there are beautiful bodies in it.

By winning Olympic gold in the eight last year in Beijing, Francia and Cafaro already had delivered a message to girls who weren’t sure that they belonged around a boathouse. You didn’t have to start rowing in high school to make it to the top of the world.

Francia, who grew up in Abington, Pa., after her parents emigrated from Hungary when she was 2, was a towering but uncoordinated athlete in high school. Every coach wanted her for every sport except gymnastics - until they saw her in action.

“Most of my coaches kept thinking I would have potential,’’ Francia says. “That’s the word I heard my whole high school career. I did basketball. I did track and field, every jumping event. I even tried the small person’s sports like field hockey. Sad, really.

“Senior year, the only athletic award I received was ‘Most Spirited.’ ’’

But after bypassing crew during her first year at Penn, Francia e-mailed the coach, went out for the squad, and eventually became an All-American. A year after she graduated in 2004, she was on the US eight.

Cafaro rowed as a freshman at Cal, then was away from the sport for a couple of years.

Unlike Francia, with her imposing altitude, Cafaro found herself dismissed as an unlikely specimen.

“I was the exact opposite from Susan,’’ she says. “Everyone always told me I didn’t have much potential and I never really fit the mold. I still get that. They’re like, you don’t really look like a rower.’’

Her model was Will Clark.

“I liked his ferocity,’’ says Cafaro, who got the former Giants slugger to sign her wrist cast when she was a kid. “That was the athlete I wanted to be. His number was 22 and I always thought since I’m a little bit shorter, a little bit smaller, I need to do a little bit extra. So I added 22 seconds to everything, because it was 22 seconds more than anybody else did.’’

Cafaro ended up making the US team straight out of college in 2006 and two years later found herself in the Olympic eight, where the US won the gold medal for the first time at a non-boycotted Games.

Francia wasn’t so sure.

“At first I did struggle with my decision whether to come back,’’ she says. “I applied to a lot of jobs. I thought, if I get a really good job, I’m at peace with putting my oar down. I applied to consulting, business, health care, everything. Unfortunately or fortunately, I couldn’t find a single job.’’

The epiphany came at an informal training camp in San Diego in January, when US assistant coach Laurel Korholz had a sitdown with them.

“She looked into our eyes very seriously and said, ‘You need to think about what you want, to feel some sense of purpose,’ ’’ Francia says. “That got the ball rolling. We thought, you know what, you’re right. Let’s challenge ourselves.’’

So she and Cafaro began training as a pair on and off, not always with stylish results.

“Early on we had some awful, awful rows,’’ Francia says. “There were some days when we came off the water and were frustrated with each other and we were actually wrestling in the Princeton boathouse.’’

Says Cafaro: “It was halfway joking, but serious. That’s how it is when you’re in a small boat. There’s nothing to defuse it.’’

As time went on, the Odd Couple meshed, though it wasn’t always attractive. Even after Francia and Cafaro won the first selection regatta for the World Championships, the coaches split them up. They just didn’t look right. Nor did they in Poland, when they came out of fourth place to beat the Romanians by 36-hundredths of a second.

“We heard the commentating and they said it still didn’t look right, but we got to the finish line first,’’ Cafaro says. “So it’s OK if it doesn’t look right, as long as we’re first.’’

After they had won a second gold medal in the eight, Dutch rival Femke Dekker approached them, asking whether the Yanks would want to join a U.N.-style eight. “We were, ‘That’s not going to happen,’ ’’ Cafaro recalls. “Sure, just call us.’’

Somehow, though, an eight was pieced together - Dekker and teammate Nienke Kingma, Great Britain’s Annie Vernon and Anna Bebington, Canada’s Jane Rumball, and New Zealand’s Emma Twigg plus the Americans. They’ve had just one practice row, here Friday, but the Great Eight is ready to take on all comers.

Neither of them would have guessed five years ago that they would be the glamour pair in the lineup, but that’s how the sport works. Match one woman with a Most Spirited trophy and another who’ll go for 22 seconds longer than anyone else and they can rule the world.

“It is funny to see how far we’ve come, but it’s also like a cool little success story,’’ Francia says. “That you can do it if you work hard and you’re passionate about it.’’