Dancer turned to crew and never looked back 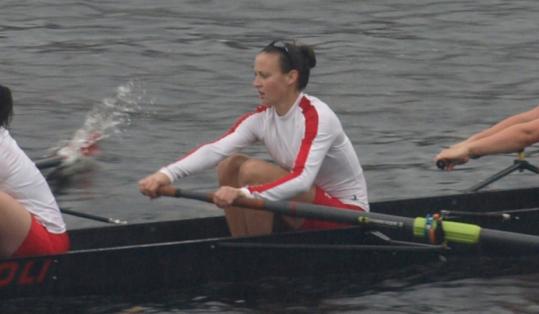 A dedicated ballerina throughout her childhood, Jenne Daley of Cohasset learned to row while at Boston University.
By Justin A. Rice Globe Correspondent / October 18, 2009

Earning bit parts in Boston Ballet’s annual production of the “Nutcracker,’’ Jenne Daley was a picture of style and grace as a young ballerina.

The same could not be said about her form as a rower when she walked onto the Boston University crew after graduating from Cohasset High in 2005.

“I’m sure I did not look pretty my freshman year, but in a lot of ways the focus is similar to dance,’’ recalled the 22-year-old Daley, who had never put an oar in the water before attending BU.

This afternoon, she will row the Head of the Charles Regatta for the fourth time, but her first as a member of the prestigious Philadelphia-based Vesper Boat Club. Daley will compete in the women’s lightweight eights race, continuing her quest to row on the women’s national team.

And she credits her background as a ballerina for her sculling success.

“Ballet and rowing are obviously different, but at the same time they are very similar,’’ said Daley, who graduated with a degree in elementary and special education in May.

“You have to be very in tune with your body when rowing. The technique was easy to pick up, to know which muscles to engage.

After joining the Terriers’ novice team on a lark in the fall of her freshman year, Daley not only made the varsity that spring, but helped BU win a medal for the first time in 13 years at the Eastern Sprints Regatta in Camden, N.J.

BU has not since medaled at the marquee event.

Daley’s first coach, Heather Cartwright, who now heads the powerhouse women’s lightweight program at Radcliffe, said it is unusual for a freshman to walk onto the varsity, let alone medal.

“She proved herself in terms of fitness and rowing technique,’’ Cartwright said.

“She moves nice, and having that sense of rhythm and movement allowed her to become a good rower.’’

While her dance training provided an edge on the water, it was an experience on the banks of the Charles that hooked her for good.

As a freshman, Daley and other first-year rowers were assigned to cheer on the BU boats while running down the 5-mile Head of the Charles course. Soaking in the pageantry of the annual October carnival, the novice rowers didn’t receive much of a workout but they did return to campus with drawstring backpacks and other freebies.

“They brought me back a hat,’’ Cartwright said.

Daley, however, walked away with more than just swag.

She also absorbed the rowing culture, since she spent the majority of her youth inside dance studios, which is another subculture all its own.

Daley, who moved to Cohasset from Cleveland with her family in the fifth grade, attended the Interlochen Center for the Arts in northwest Michigan and other well-known dance programs while in high school. But after enduring six-hour auditions for college dance programs, Daley decided she did not want to spend her collegiate years as a dancer.

Once she arrived at BU, she asoon realized she needed a structured activity to fill her free time.

“She was big into ballet, her goal in high school was to become a professional ballet dancer,’’ said Daley’s mother, Helen. “She decided in the end to go to BU. Some mailings came to the house to join the crew team and I said ‘You love to sail, give it a try.’ ’’

The 5-foot-10 Daley was also egged on by her roommate.

“She was 5-2 and she would sit looking at the flier and say ‘It’s just for tall people; I can’t do it but you should do it,’ ’’ Daley recalled.

“When I started rowing, I never expected I’d be here now.’’

The summer after her freshman year, she attended the Under-23 national team development camp in Boston and learned how to scull. Between Daley’s junior and senior year she raced with BU at the Royal Henley Regatta in London.

But for all her early progress, Daley still had a dancer’s frame and did not have the luxury of rowing for the lightweight squad, since BU does field one.

“I once held up a pair of medium size spandex and said ‘I want you to fill these out, no wrinkles, no sags in the spandex,’ ’’ Cartwright said of Daley, who continued to dance throughout college with the Boston Liturgical Dance Ensemble. “She’s a tough kid and pulls hard every time.’’

At the end of her senior year, Daley knew she wanted to continue to row and contacted Cartwright and other coaches for advice. They set her up with national team coaches at the Vesper club in Philadelphia. To pay the rent, she works as a lifeguard, teaches swim lessons, and coaches high school crew.

Daley said she will give rowing at least another year before deciding if she can reach her goal of making the national team. Even if she starts spinning her oars and plateaus, she said she will always row recreationally.