Kendall, 79, keeps rollin’ on the river

This autumn’s medical update comes from the dentist’s office.

“I lost a crown coming back from the Housatonic,’’ says Richard Kendall, who spent yesterday morning having it seen to.

No prostate treatments this year. No torn Achilles’ tendon to deal with. The Grand Old Man of the Rivah - he’s 79, but who’s counting? - will be paddling to the starting line as usual Sunday morning for the Head of the Charles regatta, looking to extend his remarkable collection of men’s senior veterans singles titles to nine in 10 years.

“As long as I can keep my degenerating body so that the failure rate is less than the age advantage, it’s an incentive,’’ says Kendall, who gets a 12-second handicap for every year over 70. Not that the man from Ridgeway, Ontario, who worked in real estate until he retired, needs that much of a head start. He has won what he calls “the 70-to-oblivion category’’ every year but one since he moved up from the veteran class in 2000.

The missing medal is from 2006, when the medication for his cancer treatments made him so drowsy that he worried he might doze off between bridges. Still, Kendall turned up at the finish as a spectator and watched Carlo Zezza from the Cambridge Boat Club take the title. No hard feelings there. The rowing game is tough enough, Kendall says, that he admires anyone who locks in and shoves off.

He has been around boathouses since 1947, when he arrived at the University of Pennsylvania and went out for lightweight crew against his father’s wishes.

“He thought it was too strenuous,’’ says Kendall, who grew up in Buffalo before moving to the far side of Niagara Falls and holds dual citizenship. “I figured, I’m at college now, he can’t tell me what to do.’’

Kendall, whose son rowed at Northeastern, ended up as the 7-man on the 1951 varsity that won the Eastern Sprints and became the first Penn boat in half a century to compete at Henley. Just getting to the Thames was an achievement; the school had dropped the sport the previous fall, then reinstated it with a volunteer coach.

Nobody figured that a bunch of 150-pounders could run through five heavyweight rivals, but Penn managed to win the Thames Cup by a length ahead of a German crew with a length-long name (Renngemeinschaft Florsheim-Russelsheim & Mindener Ruder-Verein) that outweighed them by nearly 40 pounds a man.

Kendall kept rowing after graduation and after the Army, which assigned him to Alaska as a transportation specialist, riding tugs and climbing up Jacob’s ladders to check on troop ships. By 1966, family responsibilities prodded him to put his shell on the rack.

“Then I became a distance runner,’’ he said.

Kendall turned himself into an accomplished competitor, winning masters titles at both the cross-country and 15K nationals (“When the good ones had a bad day, I could do pretty well’’) and became a sub-3-hour marathoner, running Boston half a dozen times. By 1988, though, back problems forced him off the road.

“Two neurosurgeons said they wouldn’t fix me,’’ says Kendall, who returned to the river as an indirect method of hydrotherapy.

Though he’d done sprint racing in college, he was drawn to the longer events, just as he was on the road.

Three years later, he made his Head debut as a veteran and has since turned the regatta into an October ritual. Longevity is a family tradition; his wife Deborah Greitzer has been a violinist with the Buffalo Philharmonic since 1973.

Even after being diagnosed with cancer, Kendall won in 2005 and had entered the 2006 event even though the medication kept him in dreamland most of the time. “I never woke up,’’ he recalls.

Missing the race meant giving up a guaranteed spot for 2007, but Zezza and Christopher Collins, two of Kendall’s prime and perennial competitors, requested that he be given a bow number.

The septuagenarian fraternity is empathetic by nature. Their common opponents are Father Time and the medical chart. Kendall came back the following year and reclaimed his crown by 1.4 age-adjusted seconds over Zezza (“Thankfully, Moses parted the waters for me’’), then won his eighth last year, shrugging off the Achilles’ injury he’d incurred while cross-country skiing.

His Penn crew’s motto was “Press On Regardless!’’ and that’s Kendall’s approach. While he competes a bit less these days - a couple of sprints and four Head races (he won the Housatonic last weekend) - he’s dutiful about training. At this stage, Kendall doesn’t want to give “my insulting physician’’ any reason to rule him off the water. Mornings, he drives 25 minutes each way to the Welland Recreational Canal with his Hudson shell atop his car. Afternoons, he works out on an ergometer and does some stretching.

Though his wife once joked that she had imported him as a “rare antique,’’ Kendall is fitter than many men decades younger. He weighs in at 152 pounds, trim enough that he still could qualify for a seat on Penn’s lightweight varsity. The heaviest he ever got was 165, thanks to the Army’s high-starch diet. So he’s particularly interested in which way the wind is blowing when he’s preparing for the Charles.

Last year Kendall was concerned that he’d be pulling into a howling northeaster, “but Jupiter Pluvius was kind,’’ and he beat Collins by an age-adjusted 24 seconds. By now Kendall has covered these 3 miles so frequently that he could qualify for a combined PhD in local topography and meteorology. He already has checked out Sunday’s forecast.

“I know we’ll be facing a pretty good headwind, right down the pipe,’’ Kendall says. “But I should be all right.’’

The Grand Old Man of the Rivah has done his training, and his dentist has restored his smile, so he’ll be driving down Route 2 for his annual fall reunion both on and off the water.

Though his six children now are scattered from Maine to Washington, two daughters live in the Boston area and his youngest, Esther, runs for Bates. Kendall is planning a side trip Saturday to watch her cross-country race. If he can make sure those two neurosurgeons don’t find out, he may just lace up and jump in. Going the distance is his specialty. 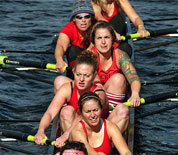 What to know before you watch them row
Your comment is subject to the rules of our Posting Policy
This comment may appear on your public profile. Public Profile FAQ