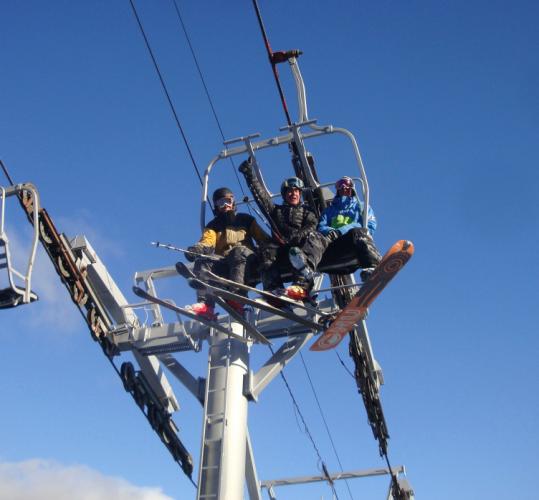 A lift at Sunday River. Oct. 22 the resort had the first skiing in the country, beating the mega-mountains of the Rockies. (Courtesy Sunday River)
By Tony Chamberlain Globe Correspondent / November 11, 2010

NEWRY, Maine — From morning on, swirling snow blocked out the otherwise blue sky, snow so thick it looked like that passage in “A Child’s Christmas in Wales’’, when snow “came shawling out of the ground.’’

And in the afternoon, the lifts rolled. From the T-1 midstation, the chairs were full of folks in ski gear — mostly resort workers, ski patrol, photographers — but there were others buckled into skis and boards heading to the summit.

Below them, others, lift workers and snowmakers, smiled and pumped fists, yelling things such as “First in the country!’’ It was Oct. 22 and even before the high-altitude mega-mountains of the Rockies, Sunday River, which is owned by Boyne Co., had gotten the North American ski season rolling, earlier than ever.

To Nick Lambert, a photographer who has been in the marketing department for 15 years, it felt like the old bold days at the resort. The days when then-owner Les Otten seemed to have a dozen new ideas a week in the meteoric rise from a local one-horse ski hill to one of the dominant resorts of the East.

“It costs us a lot of money [to make snow] that we don’t get back immediately,’’ said Lambert, “but people are so hungry to get started this time of year, that if they see Sunday River is open, they’ll buzz about it for weeks.’’

While consistent winter temperatures usually do not settle in for at least a month later the resort’s October opening, most of the larger areas need only a few cold nights to get their first blanket of snow down on the first runs. Even with setbacks of warmth and rain, each time it gets cold enough, they stockpile more and more snow, hoping for an accumulated net win.

Since the 1960s, when snowmaking was first developed — most agree at Mohawk Mountain in Connecticut — the aim was to create winter before it arrives, thus taking advantage of the pent-up demand of hungry skiers who hadn’t been to the slopes for some eight months.

Snow-producing technology has come from its earliest days of spreading around glorified crushed ice to a highly sophisticated process that, even in marginal temperatures, can produce white gold. No one pushed harder at developing machine-made snow than Otten, who adopted a modified political slogan: “It’s the snow, stupid.’’

“Les put all these toys up there for us to play with, so our thinking is, ‘Let’s put them to use,’ ’’ said Sunday River general manager Dana Bullen.

The toys Bullen refers to are a mind-boggling system of hoses and water pumps, four large electric air compressors, and 2,500 snow guns, most on towers. The resort has its own water pond that can be replenished by the nearby Androscoggin River. The massive system is maintained by 65 workers and the annual operating cost is around $2 million.

“It’s what keeps us in the game,’’ said Bullen, referring to the fact that other big market competitors such as Killington, Stowe, Bretton Woods, and even Sugarloaf — also owned by Boyne — are at work on their snowmaking plans, and possess similar arsenals.

Brent Larson, the mountain manager at Sunday River, is a student of snowmaking science. Having cut his teeth on the upkeep of golf course turf in Michigan’s Upper Peninsula, Larson devotes himself to the art of covering terrain with a product to lure skiers away from the competition.

“What we’re trying to do now is find new ways to use less compressed air to turn water into snow,’’ Larson said. “Most of the advancements we have made are in that.’’

The reasons? Compressed air, created by those electric power plants, is expensive, and often it can’t keep pace with the water supply. But with the new HKD air/water fan guns in use at several areas, once the temperature gets down around 28 degrees Fahrenheit, the air compressors can crystallize some 8,000 gallons per minute into snow and blow it across the terrain.

Even if the rain eventually wipes out much of the cover, making early snowmaking a net loss, Larson believes it’s important.

“Some people think it’s a complete waste, but the rock on the ground gets heated up by the sun, and so the snow cools the earth down and reflects most of the sunlight,’’ said Larson. “So making snow on the warm rock lets us eventually create more snow on a cooler surface.

“There are some areas that don’t even think of their snowmaking [plant] until December. But we have everything all ready — the heart is pumping — so when the time comes to make snow all we have to do is push the button.’’

In the early days, the term artificial snow — one long-abandoned as the product improved — often meant dense, heavy snow that had a tendency to turn icy. But the newer systems are more adjustable and can keep a consistent moisture level to the snow, thus lessening the cement and ice effect.

While most Alpine ski areas and tubing hills have snowmaking, it is less common at cross-country ski areas that have a broad network of trails to cover, much of them out in remote wilderness.

But at Great Glen Trails at the base of Mount Washington, before there is reliable cover from natural snow, the guns come on and cover a 2-kilometer loop and the tubing slopes.

“We’ve had snowmaking for about 15 years,’’ said Ryan Triffitt of Great Glen. “That lets us open with about 6-10 inches on the weekend after Thanksgiving.’’

From that time on, with a 1,600-foot elevation, the area is usually blanketed with natural snow. Since the trails follow smooth carriage roads, Triffitt said, the snow needn’t be deep to be skiable.

“But when we have to, we just trick Mother Nature a little bit,’’ he added.

At least one major cross-country area — Jackson XC Ski Touring Center in Jackson, N.H., — tried snowmaking for a while and then stopped. In a trail system so large and with so many elevations, director Thom Perkins said, “there’s nearly always natural cover somewhere to ski on.’’

Rather than continue to burn what he sees as an inordinate amount of energy to make snow, Perkins said Jackson spent some $330,000 to smooth the trails to the extent they would be skiable with minimum natural snow.

“If I were in an urban area [such as Weston Ski Track] or had an inn, I would consider snowmaking,’’ said Perkins. “But the way we operate, if there’s snow up on [high altitude] Prospect Farm, we’ll shuttle skiers up there to the trails. Rather than making snow on a couple of kilometers, if we get a 6-inch natural snowfall we have 100 kilometers open. Last year we had 26 snow days and four rainstorms. We were fully open all winter.’’

Most major downhill resorts will be open long before, with dates ranging from Sunday River and Killington’s early November opening to Waterville Valley and Loon’s Nov. 20 start date.

While snowmaking becomes ever more advanced and high-tech, the No. 1 problem, most area managers agree, remains getting the word out. Despite all the winter wonderlands spread out in the high New England altitudes, the “backyard syndrome’’ is hard to fight.

“It’s always about whether people can see snow at home to get them excited to come skiing,’’ said Lambert.