Strong pull to this sport 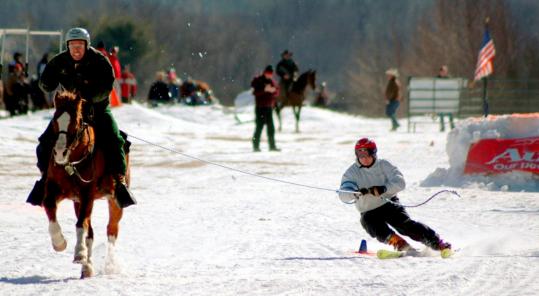 Ever seen a horse careen through a snow-covered obstacle course while towing a skier over jumps? It's called equine skijoring, and it's got the look and feel of an outlandish extreme sport featured in a crash-and-burn daredevil video on the Internet.

Truth is, horse-powered skiing is nothing new, but the modern version is safer and sanctioned. And if the newly appointed president of the North American Ski Joring Association has his way, this niche sport might someday blossom into an Olympic event.

"Ninety percent of the people who grew up with horses and snowy winters say, 'I did that when I was little; my mother used to ride and pull me in a sled!' " said Geoff Smith of New London, N.H. "This is the same thing, except a lot faster."

Although speed is the main attraction, technical precision lures others. A typical course runs 1,000 feet and features 12 slalom gates, six "jousting rings" that a skier must grab, and three ramp-like jumps ranging from 2-6 feet in height. Teams consist of a horse, rider, and skier, and each heat is scored against the clock, with penalties for failing to negotiate the entire course. The snowpack is level and groomed, and the horse does not attempt the jumps (the horse leads the skijorer into the approach, like a boat in water skiing).

Skijoring dates to the 19th century in Scandinavia as a means of travel, with reindeer and long wooden skis. In 1928, at the Olympic Games in St. Moritz, Switzerland, skijoring got its only shot as a Nordic demo event. But that version was performed riderless and without jumps, with skiers competing at the same time.

In America, skijoring caught on out West in the 1940s. One of the sport's two pioneers was a rancher who prided himself in having very swift quarter horses. The other was an avid skier with a cowboy's bravado who said there wasn't a steed fast enough to dump him. From that challenge, modern skijoring was born.

Smith and his wife, Brooke, own a horse farm, and in the spring of 2004 they saw a clip about skijoring on television. They thought it would be a great way to exercise their horses in cold weather. Even though there was no snow on the ground, Geoff, a former downhill racer and ski coach, was so eager to try it that he slapped on his rollerblades, and Brooke saddled up and pulled him on the pavement.

"He likes to go fast on his horse and his skis," said Brooke Smith. "People thought we were crazy."

The Smiths were so enamored that they flew to Wyoming to meet with NASJA sanctioning officials and inquire about starting a New England chapter. The next winter they hosted the region's first official skijoring meet, at the Newport Winter Carnival in New Hampshire, drawing 2,500 spectators.

Now in its fifth year, the North East Ski Joring Association boasts seven events, ranging from a race meet at the prestigious Quebec City Winter Carnival to beginner's clinics. Recently, Geoff took over the presidency of the North American ruling body, while Brooke was appointed secretary.

Geoff Smith said the first thing he teaches newcomers is to respect the word "horsepower." He recalls his first try off the starting line as "pretty painful" because the 1,200-pound animal ripped the rope right out of his hands. But on his next try, Smith flew down the course, "grinning from ear to ear."

The equipment is basic: Skis (preferably slalom), boots and bindings, plus goggles and a helmet. A rope (33 feet maximum) attaches behind the saddle, and the horse wears cleated horseshoes for traction.

The icy kickback from the hooves takes some getting used to. "It's like going back behind the propeller of an airplane," Geoff Smith said. Maintaining balance can also be tricky as the horse accelerates through the turns.

"The horses are great in the snow," Geoff Smith said. "They know what they're doing. You know when your horse loves it."

The Open Class circuit pays modest prize money and has a ranking system. Dick Moody, from New Boston, N.H., said he and his wife, Betsy, both in their 60s, are the circuit's oldest competitors, and they're in it more for the exercise and camaraderie.

"You don't have to be an ace," Moody said. "It's a partnership between the horse, the rider, and the skier."

But, he cautioned, even slow-paced skijorers better pay attention.

"Otherwise, you're going to get flung into the bushes," Moody said.