These skiers need to have a vision 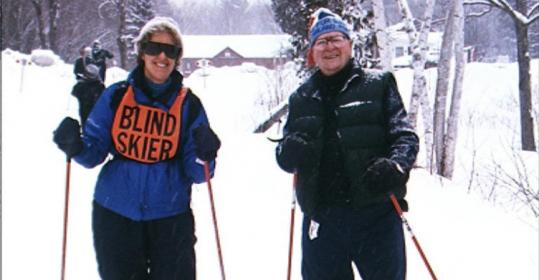 If you ask Marie Hennessy of Malden to tell a story that sums up the essence of one of the nation's oldest programs for blind cross-country skiers, her answer might surprise you. Instead of telling an exhilarating, outdoorsy tale about how New England Regional Ski For Light pairs sighted guides with visually impaired athletes, the organization's president instead points to the time dozens of members were on an overnight trip to Craftsbury, Vt., and the electricity at the inn went out.

"All of a sudden, the sighted guides couldn't see," said Hennessy, who has been blind since birth. "Our roles were reversed, and the visually impaired people were assisting the guides, because we know how to move around in a dark world. It was ironic, but at the same time, we had fun. In fact, nothing stops us from having fun."

Hennessy's positive outlook is echoed by other Ski For Light participants, who stress that the organization's main goal is not just to get adults with disabilities involved with physically demanding sports, but to provide those opportunities in an atmosphere of camaraderie that benefits both the sighted and the blind.

"One thing that Ski For Light has done for me is it makes me feel like a more complete person," said David Fisk, a volunteer guide from Thetford, Vt. "I think any type of volunteering helps a person be more complete."

Introducing visually impaired people to cross-country skiing dates back to the 1950s in Europe with a blind Norwegian musician named Erling Stordahl. His efforts led to the creation of an annual, week-long event called Ridderrenn in 1964, which has grown to attract thousands of disabled participants and guides from around the world to the mountains of Norway.

The Ridderrenn concept was brought to Colorado in 1975, and shortly thereafter morphed into a national organization known as Ski For Light. Two years later, when the annual event rotated to Woodstock, Vt., there was enough local momentum to form an offshoot branch so that activities could continue on a regular basis, and in 1977 New England became the first of what would expand to nine regional Ski For Light chapters.

Today, NERSFL doesn't rely solely on cross-country skiing to get its participants outdoors. In the winter, the group now also snowshoes. In warmer months, trips are planned for hiking, canoeing, and tandem bicycling. The organization has an itinerary of upcoming trips on its website (nersfl.org), where it actively recruits volunteer guides and visually impaired participants.

When it comes to first-timers, NERSFL members said it is usually the sighted guides, not the blind skiers, who feel a bit of anxiety the initial time they get paired up.

"Fear isn't one of my responses," said Cindy Wentz, who lives outside of Boston and has been legally blind since birth, although she does have some limited vision. "The first time on skis, I would say I probably had more of a feeling of 'Let's just go and jump into this with both feet.' "

Hennessy agreed. "I didn't have any trepidation. I felt totally comfortable," she said. "The guide who was with me had incredible patience. I knew I was going to trust this person, and he knew I wanted to make this work."

Fisk, who became a guide in 1994 and now trains the sighted volunteers who enter the NERSFL program, said he was initially "nervous about working with blind people." But he said he received valuable feedback from the more experienced visually impaired skiers, and that two-way communication made him a better guide.

"I just realized I had to give [blind people] a lot more credit than I was giving," Fisk said. "A lot of skiers with Ski For Light are good skiers. There are some who can ski any of the terrains they encounter."

Fisk said that when introducing a blind person to the sport, he will begin by explaining what each piece of equipment does with a hands-on demonstration. Guides and blind skiers are paired up on a one-to-one basis, and a lot of thought goes into matching the personalities and ability levels of the sighted and blind skiers.

On the trails, communication is the key to guiding a blind skier. "Tips left" and "tips right" are common commands, but rather than direct a skier's every movement, Fisk said a guide's primary function is to describe the lay of the land and to forewarn of any terrain changes. Whether the blind skier goes ahead of, behind, or next to the guide is a matter of individual preference.

The only emergency command that participants must obey is the "Sit down!" warning, Fisk said. Falling backward is the safest position for someone who can't see if they have to avoid an imminent obstacle.

"I spent a lot of time on my rear at first," Wentz joked.

Fisk said that when he trains guides, he often will have them ski blindfolded to simulate how someone without sight would negotiate a trail.

"It's incredibly difficult to judge your speed," Fisk said. "We rely so much on our visual cues for balance."

Teaching the basics of cross-country skiing is one thing. But helping blind athletes appreciate the aesthetics and raw beauty of nature while on the trails can be trickier.

"Almost all of it has to be verbal," Fisk said, although he will use the sense of touch to help visually impaired skiers distinguish various types of bark on trees or the difference between snow conditions. Hennessy recalled that a guide once took her outstretched arm and used it to "trace" a mountain range far off in the distance.

"I love stopping and just listening," said Wentz. She has enough sight, she explained, to tell that "the sky is blue," or what the trees look like in a "Monet kind of way." For her, "there's some visual, but you also rely on your other senses."

Hennessy said that well-meaning sighted people are sometimes hesitant to offer "too much information" out of fear that the blind person will become annoyed. But she appreciates it when the guides stop on the trail to enlighten her about things in nature that she can't see.

"Having someone take the time to think about what you might enjoy is a wonderful experience," Hennessy said.

"It's not about the destination, it's about the process," Wentz said. "It's a freedom of movement, which is hard to get in other areas of my life. When I walk [around the city] I need to concentrate on the next step and on my own safety. When I ski, all my mental energy is focused. I just remember being blown away the first time I did it."

Ski For Light is just as rewarding for the volunteer guides, too.

"It's a personal development thing for me," said Fisk. "And it's downright fun."