After years on the trail, Loon has arrived 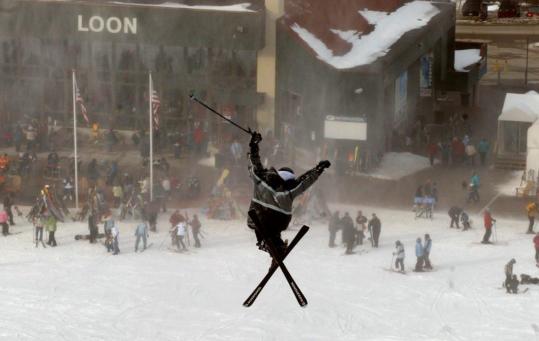 "I remember at the company meetings, them saying, 'You'll be skiing over there [at South Peak] in a year.' I've been hearing that every year now for 20-something years," said Chaiken, who owns Village Ski and Snowboard on Main Street.

South Peak at Loon Mountain opened Saturday after a two-decade-plus wait because of a laundry list of obstacles.

"This has been coming for so long," said general manager Rick Kelley. "There were so many slowdowns, stoppages, and junctions. Even when we were flying in the towers for the lifts, people were asking if this was really going to happen."

More than $10 million was invested over the summer at South Peak on three trails encompassing 50 acres, two lifts, and the Pemigewasset Base Camp, which has a cafeteria, guest services, restrooms, and parking. Loon is also undergoing a multiyear real estate development project with Destination Properties building upscale homes and condos at the base.

The trails are intermediate and advanced runs; two have snowmaking while one is a natural snow-gladed pathway.

Cruiser and Boom Run, a couple of intermediate groomers, are the main ways down South Peak and its 1,475-foot drop. Cruiser has some nice swoops, tree islands, and a long run out at the bottom, while Boom Run is a roller with a few good drops. Undercut, a black diamond, leads through the forest.

Cruiser symbolizes South Peak's tough road to fruition. The trail was cut in 1996 as part of the expansion plan when Loon had a green light. But that light turned red, and Cruiser became an out-of-bounds playground.

"We would duck under the rope, ski down, and get to the bottom of the dip," said Chaiken. "Then we would walk maybe 200 yards to hike up, take a break, ski down, and, if you know the way, can almost ski back on an old cross-country trail."

Ivan Saitow also skied Cruiser long before today's official ribbon-cutting ceremony. Saitow used to make the drive with his children from Chestnut Hill, but now lives in Lincoln. He was active in local politics, serving on the planning board and budget committee. It's his 29th year skiing Loon.

"That was 23 or 24 years of heartache getting that thing built," he said. "It has the most incredible views. You look at Kinsman, the notch, and downtown Lincoln. This was worth the effort, the money, and the wait."

Loon opened in December 1966. The little area began to grow into big mountain skiing to the East Basin steeps two years later, and then through the 1980s to West Basin and the thrills of North Peak.

Loon Mountain officials came up with a master plan in 1984 that included South Peak. As it was on national forest land, the ski area presented its proposal to the US Forest Service.

Phil Gravink was president and general manager of Loon from 1977 to 1991. Retired, he characterized the process as having its beginnings during another time.

"We became the poster child for all the environmentalists," he said from his home in Jackson, N.H.

He remembered coming to work one day and seeing a protester's sign made from a bed sheet with "Trees not skis" on it.

"It was a fair fight in most cases," he said of his experience. "I am excited that they finally got it open and I want to get over as soon as I can."

Skiers are transported to South Peak via a pair of new lifts. The Lincoln Express, a high-speed detachable quad, allows travel over the face of South Peak in under six minutes. From the Loon summit, the way to the top of South Peak is on the fixed-grip Tote Road Connector quad. The lift is found by taking either Exodus or Bear Claw Extension to the beginning of Upper Speakeasy. Skiers can take the lift both ways between the peaks, an Alpine link through the evergreens with White Mountain vistas.

A total of seven trails and three lifts are planned at South Peak. Two more-challenging trails are scheduled for the 2008-09 season, with a quad lift and two more trails the following season. Beyond 2009, the change shifts to North Peak, where three additional trails are planned, while Loon will see a new trail and lift improvements. The Seven Brothers Triple will be replaced with a high-speed detachable quad, a triple will supersede the East Basin Double, and more cabins are scheduled for the gondola.

The plan is to turn Loon and Lincoln with its Main Street shops, restaurants, and lodging into a four-season destination.