THIS STORY HAS BEEN FORMATTED FOR EASY PRINTING
Notebook 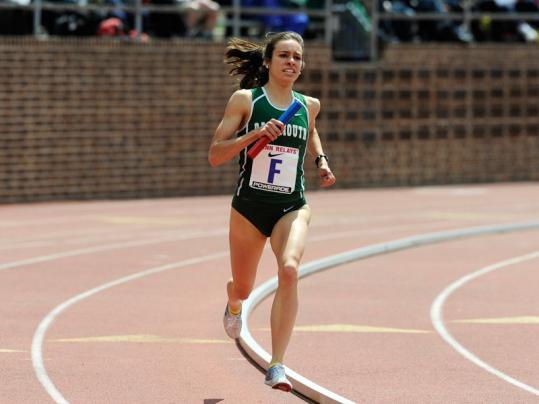 In one blink of an eye, AbbeyD’Agostinowashed away 38 years of futility for the women’s track and field program at Dartmouth.

Since the program was founded in 1975, the Big Green had never produced a national champion.

Not until D’Agostino, a sophomore from Topsfield who starred at Masconomet Regional, delivered a shocking victory in the 5,000 meters at the NCAA Division 1 championships last week in Des Moines.

And she did it in dramatic fashion, holding off a late charge from Washington’s MeganGoethalsby just three-hundredths of a second (16:11.34 to 16:11.37).

It was minutes before judges, after looking at every angle of the photo finish, declared D’Agostino the winner.

“A blink of the eye, a split second, one stride, call it what you may,” said Dartmouth long distance coach Mark Coogan, a former Olympian. “All I can tell you is that it doesn’t get much closer than this too often. It’s a shame someone had to lose a national title by that slim a margin, but we’re grateful that Abbey was able to reap the benefits of her hard work and determination.”

Next stop: the US Olympic Trials in Eugene, Ore., next weekend, where Coogan insists “Abbey will be a player.”

The top three finishers in the 5,000 qualify for the London Olympics and Coogan, picking his words carefully, said, “She has an outside shot. I'm not saying it’s going to happen, but she will be a player.

“Track Field News picks her to finish fourth,” he added. “She’ll be running with the elite 5,000-meter runners in the country and after what she did in Des Moines, it’s all icing on the cake.”

Coogan and D’Agostino had set up a brilliant race plan, figuring that defending 1,500- and 5,000-meter champion Sheila Reid of Villanova was the one to beat. The excessive heat of the day (temperatures reached 104 degrees on the track) took its toll on Reid at 4,000 meters, but D’Agostino was able to keep her composure and managed to hang with the top pack. She finally opened up a lead with 400 meters left and helf off the hard-charging Goethals.

“I came here hoping to just have fun,” said D’Agostino, a two-time All-American who finished third in the 5,000 last year. “But after working really hard, something like this started to become a dream of mine. I never thought about being the first.

“It just happened that way. It's so exciting. Because of the heat, the first mile was very slow, but then I started to pick up the pace and just wanted to stay with the lead runners. I tried to prevent any gaps from opening up. I just wanted to be in a good spot to move in front down the stretch. We cut it pretty close. It really came down to the lean.

“From the corner of my eye, I thought I had it, but wasn’t sure until the judges examined every angle of the photo.”

D’Agostino was a four-year letter winner in cross-country and track at Masco, captaining both squads as a senior.

The Agganis Foundation will recognize its 2012 scholarship winners Sunday, June 24, at Manning Field in Lynn, carrying on a tradition started in 1955 to honor Harry Agganis, the legendary Lynn Classical athlete who later starred at Boston University and for the Red Sox.

Alex Sardo, a rising senior at the Pingree School in South Hamilton, has been selected for USA Field Hockey’s Elite Futures Championship this week in Virginia Beach. In January, the Gloucester resident committed to play at the University of Michigan in the fall of 2013. A midfielder/forward, she had 15 goals and 23 assists for Pingree last fall.

There is still time to sign up and play in the 9th annual Northeast Independent Living Program Golf Tournament, an 18-hole shotgun (1 p.m.) start next Monday at Indian Ridge Country Club in Andover. Northeast is a controlled independent living center that has been providing advocacy and services to people with all types of disabilities in the Greater Merrimack Valley for the past 30 years. . . .

John Vellante can be reached at johnpvel@aol.com.