NE Connection: Kasper was born in New Jersey, but has lived in Warren, Vt., for most of his life. He trained at the Burke Mountain Academy.
Bio: Kasper, 20, will compete in his first Winter Olympics in Vancouverand he'll be the youngest member of Team USA's Alpine ski team. In 2008 he finished in the top 10 in 13 races and had top-3 finishes in four competitions. In 2009, he won the bronze at the Junior World Championships in slalom and won the slalom and was fifth overall at the 2009 U.S. Championships.
Website: Kasper's Team USA page 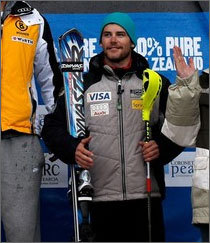