Her hometown fame is off the wall 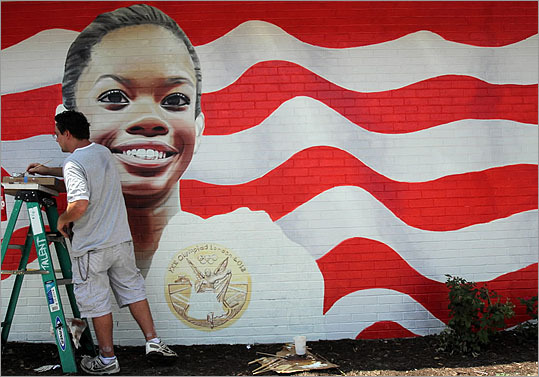 LONDON — Gabby Douglas is really big in her hometown. Really big and painted on a wall.

The gold-medal-winning gymnast has a giant mural painted in her honor in Virginia Beach, Va. And she loves it.

‘‘WOW!!! This is amazing!! (hashtag)so honored,’’ Douglas tweeted Friday from the Olympics in London, where the 16-year-old gymnast won two gold medals at the Summer Games.

The mural shows Douglas holding a gold medal with an American flag backdrop. It says ‘‘Way to go Gabby.’’

Media outlets report brothers Todd and Eric Lindbergh spent four days painting the 9-by-30-foot mural on the outside wall of a sports bar. Todd Lindbergh said he found out that Douglas was from Virginia Beach, and the idea behind the mural came the moment he saw her on television at a medals ceremony.