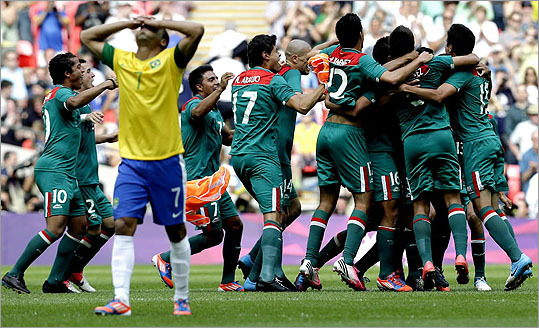 Mexico is celebrating its first Olympic gold medal in men’s soccer, and Brazil is wondering if it will ever be able to add the title to its long list of triumphs.

Oribe Peralta scored only 29 seconds into the Olympic final at Wembley Stadium and added another goal in the second half to help Mexico upset Brazil, 2-1, Saturday.

Peralta took advantage of a mistake by the Brazilian defense in one of the game’s first plays and sent a low, right-footed shot inside the near post. It was fastest Olympic goal since FIFA began keeping records of the competition in 1976.

The striker added the second with a firm header off a free kick in the 75th. Hulk scored for Brazil in injury time, but Oscar missed a header in the final seconds to waste the last chance for a comeback in front of 86,162 fans.

‘‘Mexico will be celebrating on the streets,’’ coach Luis Fernando Tena said. ‘‘It is a great honor for a coach to see his players singing the national anthem with gold medals around their necks. It’s a very important moment for Mexican football. It’s a great moment for us.’’

Brazil was also trying to win its first Olympic gold, which is the only significant trophy the five-time World Cup champions haven’t won in soccer. The Brazilians established the London Games as the team’s priority this year and arrived as the big favorite after bringing most of its top players for the competition. Many will also be on the team that will try to give Brazil the title at the 2014 World Cup at home.

‘‘We are all sad. We know it was probably our only chance to win a gold medal,’’ said Neymar, touted as the future of Brazilian soccer. ‘‘Four years from now most of us likely won’t be here again so this was our last Olympics. It was our last chance to win the gold.’’

As Mexican players jumped up and down at midfield in celebration, the Brazilians dropped to the ground in despair. Neymar was one of them, sitting stoned-faced. Real Madrid left back Marcelo dropped his head and cried as his teammates came to console him.

Peralta gave Mexico the early lead after Manchester United right back Rafael tried to make a backward pass. Mexico midfielder Javier Aquino intercepted the ball, sending it forward to Peralta just outside the area. With no defenders near him, he calmly sent his shot into the left corner.

Peralta’s second goal came off a firm header from near the penalty spot after a free kick cross by Marco Fabian.

Boxing — Bantamweight Luke Campbell won Britain’s first Olympic boxing gold medal in his division since 1908, dramatically knocking down rival John Joe Nevin of Ireland midway through the third round of a 14-11 victory.

Also, Zou Shiming of China defended his light flyweight gold medal from Beijing with a 13-10 victory over Thailand’s Kaeo Pongprayoon, who angrily protested the result; light welterweight Roniel Iglesias beat Ukraine’s Denys Berinchyk, 22-15, for Cuba’s first boxing gold in London after failing to win gold in Beijing; middleweight Ryota Murata narrowly won the second boxing gold medal in Japan’s Olympic history, beating Brazil’s Esquiva Falcao, 14-13, on the strength of a two-point holding penalty against Falcao in the final round; and Ukrainian heavyweight Oleksandr Usyk capped the night with a 14-11 gold-medal victory over Clemente Russo of Italy.

Canoe/kayak — British kayaker Ed McKeever surged to the gold medal in his sport’s fastest and newest Olympic event, the 200-meter K-1. In the two other finals, Yuri Cheban of Ukraine led from start to finish to win the C-1 200 and Yury Postrigay and Alexander Dyachenko won the K-2 200, capping a breakthrough year for the Russian pair. The final day of the canoe sprint regatta saw Lisa Carrington win the women’s K-1 200, becoming New Zealand’s first female medalist in the sport.

Field hockey — Germany defeated the Netherlands, 2-1, to win its second straight Olympic field hockey title. Jan Philipp Rabente scored twice, getting a goal in the 33d minute and the game winner with five minutes to go. Australia beat Britain, 3-1, for the bronze.

Sailing — Tamara Echegoyen, Angela Pumariega, and Sofia Toro of Spain won the gold medal in women’s match racing, thanks in part to a boat-handling error by Australia that swept its skipper, Olivia Price, into the water. Finland won the bronze medal.

Taekwondo — Carlo Molfetta of Italy won the gold medal in the men’s heavyweight division, getting awarded the victory by decision after he and Anthony Obame of Gabon fought a tense final that was still tied after an overtime round. In the women’s 67k-plus division, Milica Mandic won Serbia’s first gold of the London Games by edging top-seeded Anne-Caroline Graffe of France, 9-7.

Modern pentathlon — David Svoboda of the Czech Republic won the gold, edging Cao Zhongrong of China in the final event, a combination of running and shooting.