Boudia has final say, ends US drought in diving 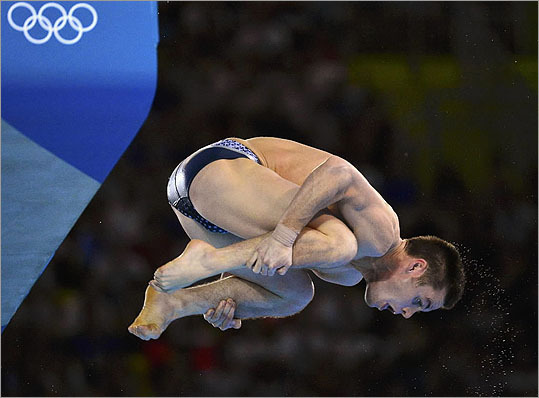 (Reuters) It came down to his final dive, but American David Boudia came through to beat China's Qiu Bo to win the gold.
By Beth Harris Associated Press / August 12, 2012
Text size – +

LONDON — David Boudia ended a gold-medal drought for the United States with a dramatic last dive that scored the most points of the 10-meter platform competition at the Olympics Saturday night.

Boudia’s victory by 1.08 points over Qiu Bo of China gave the US its first gold in diving since 2000, and was the first by an American man since the late Mark Lenzi won the 3-meter springboard at the 1992 Barcelona Games.

‘‘Oh, my God, I don’t have words for it,’’ said Greg Louganis, the diving great who swept the springboard and platform events at the 1984 and 1988 Olympics and who has mentored Boudia.

On the medals stand, Boudia wiped his brow as if to say, ‘‘Whew!’’

It was that close.

Tom Daley of Britain settled for the bronze at 556.95 after leading going into the final dive in front of a raucous home crowd that included David Beckham and his three sons.

Daley scored 90.75 on his last dive, including one 10, but Boudia and Qiu each did the same tougher dive in the last round.

Boudia, tied for second with Qiu going into the last round, scored 102.60 points on a back 2½ somersault with 2½ twists pike worth a 3.6 degree of difficulty. It was the highest score of any dive in the final.

Qiu followed him and scored 100.80, not quite enough to deliver a seventh gold for China in these games.

‘‘I was very nervous,’’ Qiu said through a translator. ‘‘I have competed so many times but I have never had that much nervousness.’’

Boudia, meanwhile, shared in a group hug with his coaches and teammates, a broad smile on his face.

‘‘I dreamed about this,’’ Boudia said. ‘‘It didn’t even feel like I was diving it was so surreal.’’

The 23-year-old diver from Noblesville, Ind., came out to find his family and friends after the medals ceremony. Boudia climbed into the stands to share hugs and kisses with his supporters who wore royal blue T-shirts with ‘‘Boudia’’ on the back.

Nick McCrory, the other American, finished ninth in his first Olympics.

Boudia’s victory was the fourth diving medal won by the US in London after the Americans were shut out at the previous two Olympics for the first time. They won a silver and two bronze medals in the synchro events. It was the first US diving gold since Laura Wilkinson upset the Chinese on women’s platform at the Sydney Games.

Daley was in contention until the very end to try to win the host country’s first Olympic diving gold. But he appeared plenty happy with his bronze medal, jumping into the diving pool with his teammates and coaches for a splashfest after the final scores were posted.

Daley’s bronze was the first diving medal of any kind for Britain since 2004.