Bolt, Jamaica in a world of their own 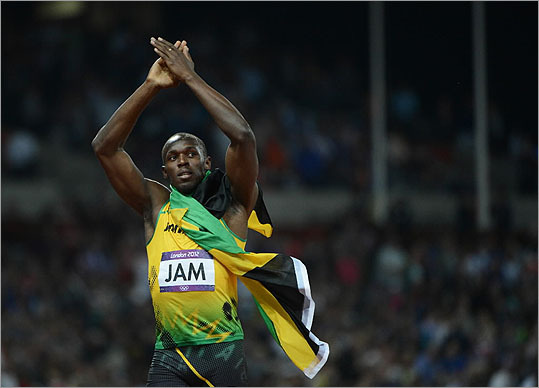 LONDON — The United States and Jamaica made its final baton exchanges in the men’s 4 x 100 meter relay virtually even. The anchor legs gripped the sticks in full stride and dashed toward the line, a blur of red, yellow and green. The Olympic Stadium crowd unleashed a deafening roar in anticipation of a thrilling finish.

During any other era in track and field history, the US would have been running for gold. But this is the Usain Bolt era.

Powered by his long strides, the 6-foot-5-inch Bolt easily opened a lead on American anchor Ryan Bailey. Running hard all the way through the finish without any hint of theatrics, it was clear he wanted something in addition to gold. He craved the kind of grand finale only a self-proclaimed “living legend” could deliver. Bolt crossed the line in 36.84 seconds and gave 80,000 spectators and millions of television viewers a new world. The time broke the record of 37.04 set by Jamaica at last year’s world championships, once again, highlighting the Caribbean country’s recent sprint dominance.

“I like to push the barrier, to do things that no one has ever done before, because it sets you from everybody else,” said Bolt. “That’s why I change the game. I like to mess around, do fun stuff, change it a little bit. For me, it’s been great. Without my teammates, I wouldn’t have run so fast. But we know we could do it. We were just wondering how fast we could run. We’ll continue pushing barriers. There’s going to be great talent coming out of Jamaica.”

The US finished with silver in a national record 37.04, equaling the previous world record. ( “I was running for my life,” Bailey said of competing against Bolt on the anchor leg). After Canada’s disqualification for a lane violation, Trinidad and Tobago was elevated to bronze with a time of 38.12.

The US saw its confidence wane after the 2008 Beijing Games, when a dropped baton kept it from the finals. And at the 2004 Athens Games, poor passing kept the US from gold.

“We just wanted to come back and show the world that we can get the stick around, that we can make some magic in our Lane 7,” said Gatlin. “We did a great job with our handoffs and we got to the finish line the best way we could.”

With his unmatched talent and unparalleled appetite for showmanship, Bolt dominated the nine days of track and field competition at the London Olympics. He was the man everyone came to see on the track. He was the man everyone talked about in queues across the city. The final leg of the 4 x 100 was the fitting culmination of his history-making Games. Following the finish, Bolt saluted the crowd, then held up three fingers. In successive Olympics, he had earned three gold medals in the glamour sprint events — 100, 200, 4 x 100 relay. With gold medals from the 100 and 200 in London added to golds from the 100 and 200 in Beijing, Bolt, 25, became the first man to capture both titles in consecutive Olympics.

Bolt enjoyed his third gold of the London Games as much as the others. He celebrated by leading 80,000 spectators in the wave and paying tribute to British 5,000- and 10,000-meter gold medalist Mo Farah with the “Mobot,” his arms shaped into an “M.” He kissed the track and pranced around the stadium with the Jamaican flag. The only person who put a damper on the celebration was a track official who would not let Bolt keep the winning baton as a souvenir, threatening the Jamaicans with disqualification. Evenutally, Bolt coaxed the official into relinquishing the stick.

“To be on the podium with my teammates was wonderful,” said Bolt. “The relays are always the favorite part for me of the championships because they’re much more relaxing. We can laugh.”

At the postrace press conference, teammate Yohan Blake nearly stole the show, trying to explain why he said he was from Mars.

To which Bolt replied, “I’ve said to Yohan that he needs to stop talking like that or somebody’s going to put him in a straight jacket one day.”

The moment was a quick glimpse into the chemistry, the relaxed, fun-loving attitude that makes the Jamaican team click and run fast.

In the women’s 4 x 400 relay, the American women also had the world record on their minds. The US won in 3 minutes and 16.87 seconds, almost four seconds ahead of the field, but came up a second short of the world record. Russia earned silver in 3:20.23, and Jamaica followed in bronze in 3:20.95.

“I was trying to amp [my teammates] up,” said DeeDee Trotter. “In my mind, two or three days out, I started saying, ‘This world record, if any team can do it, this is the squad that can do it.’ I consider us to be the Dream Team of the 400. We have the strong capability of doing it. None of us were fresh. I want to make that very clear . . . we were on dead legs. To run 3:16.87 is phenomenal and we’re proud of that. But we were definitely gunning for the record. We wanted to get it. And it’s definitely on our check list of things to do.”

Shira Springer can be reached at sspringer@globe.com.