THIS STORY HAS BEEN FORMATTED FOR EASY PRINTING
Olympics Notebook

Women ready to step into the ring 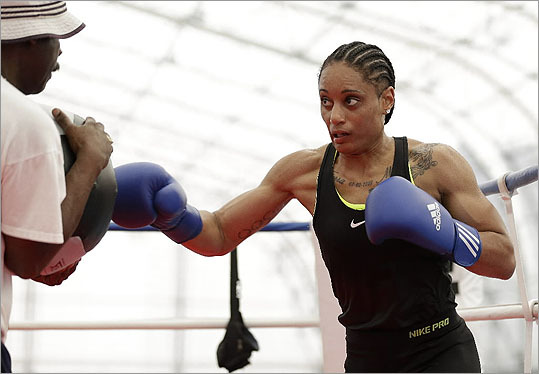 Queen Underwood will become the first American woman to climb into an Olympic boxing ring on Sunday. But the historic role won’t distract her from the task at hand, beating British lightweight Natasha Jonas.

The Olympic fighters believe they can change the minds of anybody who still thinks women can’t — or shouldn’t — pack a punch. Cuba refuses to field a women’s team, and most fighters in the London field can tell stories of sexism, prejudice, and plain ignorance blocking their paths to this brutal yet elegant sport.

‘‘You’re always going to have somebody saying you shouldn’t do something, but that’s not just in boxing, but life,’’ Underwood said. ‘‘You can’t listen to people who don’t want you to pursue your dream.’’

AIBA will lobby for more women to compete in the 2016 Summer Games in Rio, but this year, it'll be easier to win an Olympic gold medal than a world championship. Just one victory will be necessary for the top two fighters in each weight class to claim at least a bronze. American flyweight Marlen Esparza and middleweight Claressa Shields received opening byes and will be fighting for medals on Monday.

In Sunday’s men’s singles final at Wimbledon, Andy Murray gets a do-over a month after losing to the man who dominates on the very same Centre Court grass, top-seeded Roger Federer.

And Murray, seeded third, might finally have everything perfectly lined up to win the big one. The hard-luck Scotsman will have full crowd support.

Federer, who beat Murray in four sets on July 8 for his 17th major title, has never won a singles medal. The Swiss star needed 4 hours 26 minutes to win his semifinal on Friday.

The US women’s basketball team can clinch the top seed in its group for the quarterfinals by beating China on Sunday in the final game of pool play. The Americans are 4-0, winning by an average margin of nearly 35 points. China is 3-1.

The teams played an exhibition game in Seattle in May and the US coasted to a 38-point victory. The Chinese team was playing without Miao Lijie and Chen Nan.

‘‘Every game from here on out is a must-win game for us to accomplish our goals,’’ coach Geno Auriemma said.

Britain’s Culture Secretary was criticized for meeting with media tycoon Rupert Murdoch at the Olympic Aquatics Centre, months after he faced tough questions at the country’s media ethics inquiry over his links to the mogul.

Jeremy Hunt, the most senior minister responsible for the Olympics, was seen talking briefly with Murdoch on Friday night, when the News Corp. chief attended events as a guest of London Mayor Boris Johnson.

In May, Hunt had told Britain’s judge-led inquiry into press standards that he regretted developing friendly ties to Murdoch’s son James.

Opposition Labour Party lawmaker John Mann claimed it had been inappropriate for Hunt, whose ministry is responsible for the media, to greet Murdoch, saying he should be avoiding the media mogul ‘‘like the plague.’’

Ukrainian weightlifter Artem Ivanov failed to show for his weigh-in and withdrew from the men’s 94-kilogram class. Ivanov told Ukrainian newspaper Komsomolskaya Pravda he was injured three weeks before the Olympics. Ivanov placed second in last year’s world championship . . . Two top Russian weightlifters withdrew for medical reasons. Dmitry Klokov and Khadzhimurat Akkaev were medal favorites in the men’s 105-kilogram category . . . According to the IOC, Russian cyclist Victoria Baranova was expelled from the Games after failing a pre-competition drug test, and Colombian runner Diego Palomeque was provisionally suspended after a pre-competition positive drug test. Palomeque did not start in his scheduled heat in the men’s 400 meters on Saturday . . . The Brazilian Olympic Committee said rower Kissya Cataldo da Costa was suspended for failing a doping test before the Olympics, and she withdrew from the women’s single sculls competition.