Williams completes her collection of titles 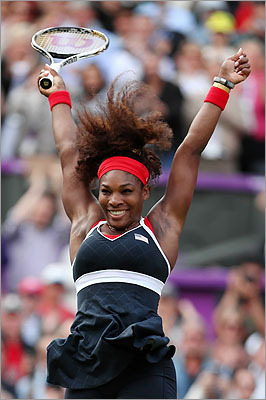 As Serena Williams stood atop the medal podium, her career Golden Slam complete thanks to an Olympic rout, the gusty wind on Wimbledon’s Centre Court blew the American flag off its pole midway through the national anthem.

Old Glory came to rest in front of the Royal Box.

‘‘It was probably flying to come hug me because the flag was so happy,’’ Williams said.

Williams wore a smile after she became only the second woman to achieve a Golden Slam, winning the most lopsided women’s final in Olympic history Saturday by beating Maria Sharapova, 6-0, 6-1.

The victory completed a remarkable run of domination by the fourth-seeded Williams, who lost only 17 games in six matches en route to her first singles gold medal. She also won her fifth Wimbledon title a month ago.

‘‘I was so focused here,’’ said Williams, who matched the Golden Slam first accomplished by Steffi Graf (1988 Olympics after sweeping all four major titles).

Top-seeded Victoria Azarenka of Belarus won the bronze by beating No. 14-seeded Maria Kirilenko of Russia, 6-3, 6-4.

Two hours after Williams completed her Golden Slam, twins Mike and Bob Bryan of the US achieved the same feat, beating Jo-Wilfried Tsonga and Michael Llodra of France to win the gold in doubles, 6-4, 7-6 (7-2).

Britain confirmed its status as rowing’s dominant nation by winning two golds on the final day of competition at Dorney Lake and finishing atop the medals table. Triumphs by the men’s four and the lightweight women’s double sculls brought the host country’s tally of golds to four, one more than New Zealand.

With the British also claiming a silver in a controversial final of the lightweight men’s double sculls, they finished with nine medals — four golds, two silvers and three bronzes — to surpass the country’s record total of eight from the 1908 Olympics, also held in London.

In the two other finals raced under gloomy skies, Miroslava Knapkova of the Czech Republic sealed a wire-to-wire victory in the women’s single sculls, and Denmark won its only gold of the regatta through Mads Rasmussen and Rasmus Quist in the lightweight double.

That race had to be restarted after the seat of British rower Zac Purchase came loose, forcing him and Mark Hunter to stop rowing. Despite a complaint from the French, the race was able to start again because it hadn’t progressed more than 100 meters.

Australia, one of rowing’s traditional powers, ended a disappointing regatta without any gold medals. One of its biggest hopes was the men’s four but in the most eagerly anticipated of Saturday’s four finals, they were outmaneuvered by Britain’s crew of Alex Gregory, Pete Reed, Tom Janes, and Andrew Triggs Hodge, which retained its title for the third straight Games. The US won bronze, two seconds behind Australia.

Sophie Hosking and Kat Copeland rallied to win the lightweight women’s double for Britain. It was the third gold won by a female British crew at the Olympics; a British woman had previously never won more than a silver.

After a grueling swimming, cycling, and running slog, Switzerland’s Nicola Spirig held off Lisa Norden of Sweden in one of the best finishes in any sport at these Games. Norden’s late sprint following a lung-bursting, 6.2-mile run took her across the line in exactly the same time as Spirig, both in 1 hour 59 minutes 48 seconds, and a photo finish gave Spirig the gold and Norden the silver.

Spirig initially pulled away from the other two medalists with a little more than 50 yards to go, but Norden chased her down over the final few steps. The photo finish showed a desperate Spirig thrusting out her hips and upper body to win, which gave Switzerland its first medal in London.

Jamie Lynn Gray washed away four years of Olympic anguish by winning the women’s 50-meter three-position rifle event and giving the US its third shooting gold medal in London, the Americans’ best total since 1984. Gray’s final shot netted a near-perfect 10.8 points and gave her an Olympic-record total of 691.9.

Gray missed the medal stand in two events in 2008 by a combined 1.8 points. This time she wrapped up gold by finishing 4.4 points better than silver medalist Ivana Maksimovic of Serbia. Adela Sykorova of the Czech Republic was third.

In women’s trap, Italy’s Jessica Rossi set world and Olympic records by not missing a single shot in qualifying, and following that up with a 24-for-25 showing in the final to win the gold medal. Slovakia’s Zuzana Stefecekova won the silver, topping bronze medalist Delphine Reau of France in a shoot-off.

Facing the US in the final of the women’s team pursuit, Dani King, Laura Trott, and Joanna Roswell shattered the world record they had set earlier in the day to deliver another cycling gold medal to Britain. The winning time was 3 minutes, 14.051 seconds, finishing a full quarter-lap ahead of the Amercian team of Sarah Hammer, Dotsie Bausch, and Lauren Tamayo. Canada beat Australia for the bronze.

The US never truly had a chance against the queens of the pine wood. Britain set a withering pace early in the final and only got faster with each 1,000-meter split, ripping across the finish line as a group to give the host country its fourth gold medal in five cycling finals so far.

Rosannagh MacLennan soared to Canada’s first gold in London, capturing the women’s title when defending champion He Wenna of China wobbled during her final routine. MacLennan flipped and twisted to a personal-best score of 57.305.

China’s He cruised through the two-round qualifying, easily posting the top score. Yet she came in third at 55.950 while countrywoman Huan Shanshan won the silver medal with 56.730.

Li Xuerui defeated world champion Wang Yihan, 21-15, 21-23, 21-17, in an all-Chinese women’s singles final. Saina Nehwal became only the second woman from India to medal in the Olympics when Wang Xin of China retired injured during their playoff for the bronze.

Tian Qing and Zhao Yunlei of China won the women’s doubles gold medal, defeating Mizuki Fujii and Reika Kakiiwa of Japan, 21-10, 25-23, on their fourth match point. Russia’s Valeria Sorokina and Nina Vislova took the bronze a few days after being reinstated to the competition following the disqualification of four teams for trying to lose matches to manipulate the pairings.

Ilya Ilyin of Kazakhstan shattered clean and jerk and total weight world records to become the first weightlifter in London to defend an Olympic gold medal from Beijing. Competing in the men’s 94-kilometer group, Ilyin lifted 233 kilograms in his final clean and jerk for a world record in that discipline. His total of 418 kilograms beat the pre-competition world record from 1999 by six kilograms.

Alexandr Ivanov of Russia got the silver medal, and Anatoli Ciricu of Moldova took bronze.

China defeated South Korea, 39-25, for the gold medal in women’s team epee. A silver medal was welcome for South Korean fencer Shin A-lam, who lost a disputed semifinal in the individual competition five days ago and sat crying on the strip for an hour until the judges rejected an appeal by her team.

The US edged Russia, 31-30, in extra time to take bronze for its first fencing medal at these Games.