First loss for US volleyball 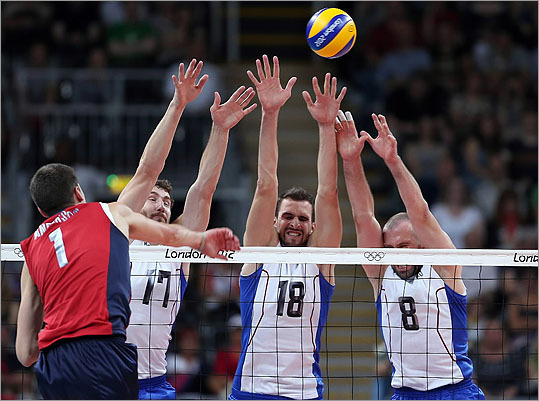 Maxim Mikhaylov scored 27 points and Russia snapped an 11-match winning streak for the US men’s volleyball team in Olympic play with a 3-2 preliminary-round victory on Saturday.

A win would have allowed the US to clinch the top seed in its pool. The next chance comes on Monday against winless Tunisia.

Vanja Udovicic scored three goals and Serbia dealt the US men’s team its first loss in London, 11-6, in preliminary-round play. Serbia scored the first three goals to take control and then did the same to start the second half.

Serbia moved into first place in Group B with 7 points. The US is 1 point behind and plays three-time defending champion Hungary in its last group game. Both the Americans and Serbs have clinched a spot in the quarterfinals.

The No. 2 US men’s team of Jake Gibb and Sean Rosenthal ousted Russia’s Sergey Prokopiev and Konstantin Semenov, 21-14, 22-20, to reach the men’s quarters.

Brazil remained on track to win its first Olympic gold medal while the crowd favorite in the men’s quarterfinals, Britain, was knocked out.

South Korea beat Britain, 5-4, in a penalty shootout to eliminate the host nation. Ki Sung-yueng scored the winning penalty after Daniel Sturridge missed the fifth penalty for Britain. The score was 1-1 after regulation.

South Korea will play its semifinal against Brazil, which defeated shorthanded Honduras, 3-2. Brazil twice came from behind, with Leandro Damiao’s second goal proving to be the winner in the 60th minute.

Honduras was left with 10 players after defender Wilmer Cristanto was given a second yellow card in the 33d.

In other quarterfinal matches, Mexico beat Senegal, 4-2, in extra time, and Japan reached its first semifinal in 44 years by beating Egypt, 3-0.

Venus and Serena Williams clinched at least a silver medal in women’s doubles when they beat Maria Kirilenko and Nadia Petrova of Russia, 7-5, 6-4. The Williamses will go for a third gold medal together when they face Andrea Hlavackova and Lucie Hradecka of the Czech Republic Sunday.

Wu Minxia cruised into the women’s 3-meter springboard final after qualifying in the top spot. She totaled 394.400 points in the five rounds, giving her a lead of 32.30 points over second-place Tania Cagnotto of Italy. Cassidy Krug of the US was fifth.