James saves the US

Lithuania had upset in mind 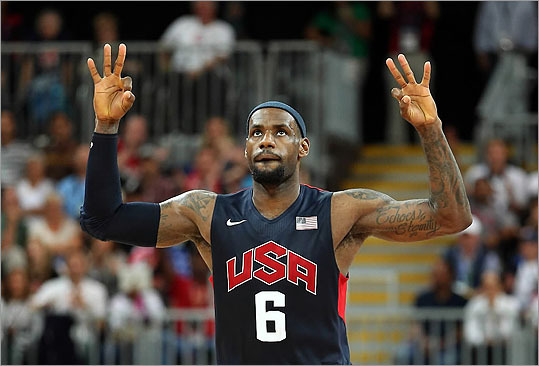 (Christian Petersen/Getty Images) LeBron James scored 9 of his 20 points in the final four minutes for the US, which had previously looked nearly invincible.
By Tom Withers Associated Press / August 5, 2012
Text size – +

LONDON — When the moment arrived, the Americans responded.

Pushed to the max by a fearless Lithuanian team smelling a world-shaking Olympic upset, the US collection of basketball superstars united as one.

And LeBron James led the way.

Two days after running and gunning to a record-shattering 83-point win, the US was forced to play a possession-for-possession game in the fourth quarter in a 99-94 win over Lithuania.

The Americans were in serious trouble until James — in his third Olympics — stepped up in the closing minutes.

‘‘It was like LeBron said, ‘I got this, I’m doing this,’ ’’ US coach Mike Krzyzewski said.

James scored 9 of his 20 points in the final four minutes for the US (4-0), which had looked nearly invincible in thrashing Nigeria, 156-73, on Thursday night while breaking several records. But the Americans were reminded that the path to a gold medal is loaded with traps and Lithuania nearly sprang one.

‘‘You want to get tested,’’ James said. ‘‘The best teams want to be tested. We love the competition. We’ve got some of the greatest competitors in our league, in this world, so you want to have a game where you feel like you were tested, and we had that today.’’

The US trailed by 2 points with under six minutes left before using a 15-4 run to put away Lithuania (1-3), which was seeking to duplicate its stunning win over the Americans in 2004 at Athens, when the US program dropped to its low point after decades of dominance.

However, James, who was an Olympic rookie eight years ago, refused to allow it.

The reigning MVP and a recently crowned NBA champion knocked down a 3-pointer from the top of the key, and after Chris Paul stole the inbounds pass, James took a feed down the right side and delivered one of his trademark dunks, a basket that brought the American players off the bench and seemed to restore world basketball order.

Carmelo Anthony added 20 points, Kevin Durant 16, and Paul had 7 rebounds, 6 assists, and 4 of the US team’s 17 steals. After making a record 29 3-pointers in their epic win over Nigeria, the Americans missed 23 of 33 attempts.