Size matters to American weightlifter Holley Mangold, who has an extra-large physique and a personality to match 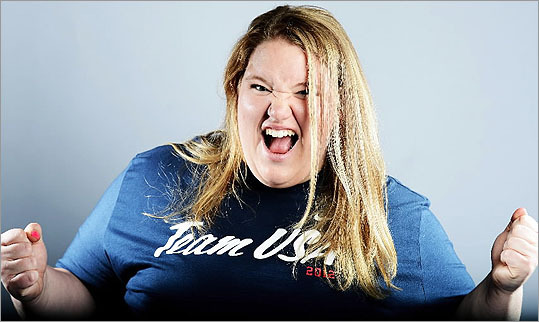 LONDON — How do you feel being big?

Most super-plus-sized, 22-year-old women would flinch at the question. They’d be shocked. Angered. Insulted. Not Holley Mangold.

“I love my body,” said Mangold, patting her belly with both hands. “I think it’s perfect. I’ll always be a big girl.” By big, Mangold means 5 feet 8 inches, 350 pounds, a super heavyweight in the world of Olympic weightlifting.

On Sunday, Mangold competes in the 75 kilogram-plus division. Her coach, Mark Cannella, said “if she lifts out of her mind and has a great day,” a bronze medal is within reach.

In a sport that typically rewards older, more experienced lifters, her Olympic debut comes 3½ years after she entered the world of Olympic weightlifting, and four years ahead of schedule. With athleticism and explosive strength developed playing the offensive line in high school football, Mangold has become something of a weightlifting prodigy, a medal contender while still mastering the technique.

“When I was younger, I always wanted to be in the Olympics,” said Mangold. “I wanted to be in for gymnastics, but my body seemed to disagree with that. Then, I decided to go into weightlifting. It was probably only a year and a half ago when I thought I could actually do this. Everyone thought I was going to 2016. I was the underdog that came through. Now, I’ve got to show that I deserve going to 2012.”

Mangold will be chasing big-time, résumé-building results and the perfect lift once the competition starts at the ExCel Arena. And she is committed to weightlifting for the long haul, not just the big haul.

“Weightlifting is so amazing because it’s like a 400-pound golf swing,” she said. “It’s so technical. It looks effortless when you do it right. When you do it wrong, it looks like it’s really, really heavy. When you get a good lift, the bar is literally weightless off your body. Then, you don’t feel it until it hits over your head again. You get that lift maybe one in 100 times. But if you get that lift, you’re chasing that lift for the rest of your life.”

Not only does Mangold embrace the challenge, she relishes changing perceptions about the sports and about big girls. “Just because you do a more manly sport or something that doesn’t seem like the social norm for females, it doesn’t mean you have to forget all your female stuff,” she said. Mangold mentions being a member of the homecoming court in high school and painting barbells on her nails for the US Olympic trials. Then, she admits missing the contact of football and craving a sports identity separate from her older brother, Nick Mangold, the New York Jets’ All-Pro center.

No topic knocks Mangold off her game. No subject seems off limits. She is honest, funny and unpredictable, like when she mentions her fear of butterflies. It’s all part of her charm. When asked about her outsized personality, Mangold doesn’t miss a beat. “Well, it matches the body.” Butterflies aside, her fearless, full-speed-ahead personality helps explain why Mangold thrives on the biggest stages with the highest stakes.

“It’s kind of like Michael Jordan,” said Cannella, coach of the Columbus Weightlifting Club, where Mangold trains. “The best players rise to the occasion. When there is a big competition, Holley usually brings everything and then some to the table.”

But it wasn’t until she “bombed out,” missed one of two lifts and failed to post a total at a major competition and lost her spot at the Olympic training center in Colorado Springs that Mangold started on the path to the 2012 London Games. It led her back to Ohio, to the Columbus Weightlifting Club, and to the laundry room she now calls home.

Words to live by

About 15 months ago, Mangold was a weightlifter in desperate need of tough love. Despite posting a personal best at the 2011 Arnold Sports Festival two months after knee surgery, she lacked the discipline and focus Olympic-caliber weightlifting requires. There were late nights, followed by late mornings. There were second thoughts about leaving behind Ursuline College in Ohio, where her weight-room exploits were outrageous. For all her potential, Mangold seemed reluctant to work hard.

The disappointment of bombing out at a big competition and being kicked out of the Olympic training center lingered and played with her mind. And that was when her best friend, training partner, and unofficial life coach Drew Dillon stepped in with what Mangold calls the talk. Or, as he remembers it, a series of conversations about setting priorities and sticking with a routine.

“She got caught in this area where she connected hard work with failure over the whole issue with the Olympic training center,” said Dillon. “I called her out on that. She was thinking, ‘I’m in my early 20s, all my friends are at college and I’m missing all this big stuff.’ It was helping her see that her friends will never have an opportunity like she has on her plate now and getting her to attack that.”

“I’m glad they did that,’’ Mangold said when asked about not being invited back to the Olympic training center. “Because that lit a fire under my butt. I was so mad.”

With Dillon’s help, she channeled that anger into serious training and a disciplined lifestyle. She logs about 27 practice hours per week, with double sessions some days. She lives with Dillon and two other male roommates, and moved from the couch to the laundry room not too long ago. She wakes up early to make Dillon breakfast because it helps her keep a regular schedule, works for Ohio chain City Barbeque in Columbus, and plays the video game Mario Kart to relax.

At the US Olympic trials, hard work became associated with success when she lifted 242.5 pounds (110 kilograms) in the snatch and 319.7 pounds (145 kilograms) in the clean and jerk for a personal-best total of 562.2 pounds. That was good enough to earn one of two spots on the women’s US Olympic team, beating 15 other hopefuls across six weight classes.

“I am excited about having my own sport,” said Mangold. “I feel like I’m a lot better in weightlifting than I was in football.

“People always ask me what it was like to be in my brother’s shadow. I didn’t really think of it as his shadow. I thought of it as he was paving the way. I always thought that he was really cool, wanted to be just like him. So, this is kind of cool because it’s all my own.”

Her weightlifting performances impress older brother Nick, who watched her compete at the US Olympic trials. “I could never do that,” he told her. “I could never be in the middle of the stage and everything falls or makes it on you.”

Holley and Nick were competitive as children. She jokes that they even staged a contest to see who could eat the most. “I’m pretty sure I won that one,” she said. And while they don’t make a practice of talking about their respective sports and sharing advice, it’s clear Nick’s success spurs Holley and vice versa. Their athletic achievements stun the Mangold family.

“All I could think of after the trials was, ‘In one year, my daughter made the Olympics and my son was at the Pro Bowl,’ ” said Therese Mangold, Holley and Nick’s mother. “For both of them to be at this level and from the same family, it’s definitely surreal. I don’t know how it happened.”

For Holley, football provided an athletic base.

When Holley Mangold asked for permission to play football in the second grade, her mother fully supported the idea. Her father, Vern, was “downright opposed.” He didn’t worry too much about Holley’s safety or what people would say about a girl playing football. Above all, Vern wanted Holley treated like every football player, not coddled by a coach. He didn’t like the idea of Holley getting anything except the full football experience.

“The compromise we struck was that I would be her head coach,” said Vern. “Holley would play for me and I would make sure the standards were not watered down. When the games came, I’d coach her the same as any other player. That was the deal and the rest was history.”

To hear Holley tell it, Vern often demanded more of her than the other players. She remembers having to do 80 yards of a bear crawl because she walked to get some water. But the approach worked, building Holley into Ohio’s first high school female to play a down from scrimmage when she took her place on the offensive line with the Archbishop Alter High varsity. Holley attended Ohio State’s football camp, staying with Nick and experiencing “four of the best summers ever.” Nick was big man on campus then, and Holley was a high school football standout for more than her blond ponytail.

Of all the trophies won by his four athletic children, Vern’s favorite is the “top lineman” award Holley won at a camp before her junior high school season. And it wasn’t long before Division III colleges took an interest.

“What I got out of high school football was like 40 brothers,” said Holley. “They would tease me and we would all tease each other at football practice. But God forbid anyone outside our football team do something and they’d be right there to stop them. That’s what was great. That’s what made me so confident and happy. I didn’t have the normal high school experience that most large women have, that makes them insecure or unhappy. I had lots of friends.”

Growing up, she tried many sports, 11 by her count — including roller skating, swimming, and softball — before weightlifting. She was a state champion speed rollerskater at 5. But there was something different about weightlifting, something that made it stick.

“She has found a sport that challenges her,” said Vern.

Now, part of the challenge comes from Holley’s belief she can win the ultimate prize.

“I don’t think I would do this sport if I didn’t think I had some sort of shot at gold in the future,” said Holley.

As always, she is thinking big.

Shira Springer can be reached at sspringer@globe.com.