Timing is right for US in the long run 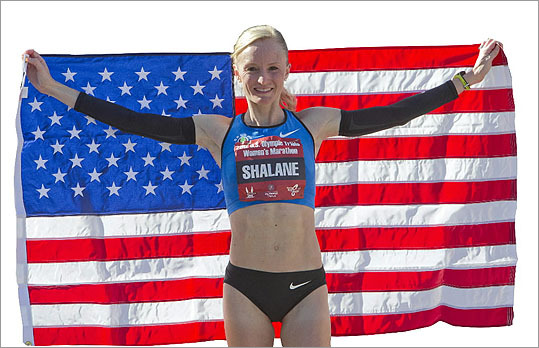 LONDON — Not long ago, distance-running fans questioned the future of United States women in the marathon. Would they ever be a significant presence at major marathons again? Would they snap decades-long winless streaks in the Boston Marathon and New York City Marathon anytime soon? Would they return to the Olympic podium?

Around the world, as the 26.2-mile race was dominated by talented Ethiopian and Kenyan runners, US women struggled to stay with the pace and progression of the sport. Sometimes they kept up, but they never truly contended for big titles.

When the Olympic women’s marathon starts Sunday morning on The Mall, the US will have two legitimate medal contenders. Marblehead’s Shalane Flanagan and Kara Goucher. If not for a persistent hip flexor injury, 2011 Boston Marathon runner-up Desiree Davila could have been in the medal mix, too. Now, after the pioneering achievements of Joan Benoit Samuelson and the record-setting performances of Deena Kastor, the US appears ready to compete and possibly win the big races.

“Anything can happen in the marathon, which is sometimes unfair, but it’s also very enticing,” said Flanagan. “While I may not have run a 2:20 marathon, I still think I’m a very viable, reasonable medal contender and so is Kara. We just know how to compete. And we know that the marathons can take victims. We know that if we’re smart and execute, really great things can happen.

“The three of us are really fierce competitors and have this killer instinct about us. We’re just not intimidated by the East Africans and some of the top marathoners. I don’t feel like they are that much better than me. I feel like I’m going to be pretty gritty and put my nose in there. We’ll find out on that day if it’s good enough.”

New York City Marathon director Mary Wittenberg, who has followed the careers of Flanagan, Goucher and Davila, called the trio “the strongest USA women’s team ever.” If Davila was at full strength, Wittenberg said they “would be one of the strongest teams out there Sunday.” Davila’s coach, Kevin Hanson, said Davila, 29, was withdrawing, deciding to keep keep rehabilitating her hip flexor injury. and take her place on the starting line.

“Kara and Shalane?” said Wittenberg. “Call me crazy, but I think we could see two medals. They are healthy, fit, super competitive, have great track credentials and will feel at home with each other out on the course. It’s a super competitive field, but a course that is tough and will be an equalizer. Shalane and Kara are smart runners and mental discipline and toughness will be key on this course.”

As training partners, Flanagan, 31, and Goucher, 34, logged heavy mileage during an early spring high-altitude training camp in Mammoth Lakes, Calif. Then, the marathoners returned to their home base in Portland, Ore., for speed, tempo and strength workouts designed for the turn-filled Olympic marathon course. During the race, marathoners will loop along the Thames River and past historic places such as the Tower of London, Houses of Parliament, Buckingham Palace, Trafalgar Square, and St. Paul’s Cathedral.

“We feed off each other’s work ethic and enthusiasm,” said Flanagan. “Kara’s run more marathons than me, so she has great advice on certain situations. If she’s having a rough workout, I can show her how it’s a great workout. You can always spin it to be good. We both offer that to each other. We genuinely want to see each other do well. If Kara’s successful, it’s only going to carry over to me.”

With only two marathons to her credit — the 2010 New York City Marathon where she made her debut and finished second in 2:28:40, and the 2012 US Olympic trials where she won in a trials-record and personal-best 2:25:38 — Flanagan is a relative novice. Still, throughout one of the most successful track careers in US distance running, with American records in the 5,000 and 10,000 and indoor 3,000, Flanagan said she dreamed of winning Olympic medals and the Boston Marathon. She collected a bronze in the 10,000 meters at the 2008 Beijing Olympics. Then, she decided it was time to take on “the next big challenge,” to train for the event the petite, 5-foot-5-inch, 113-pound athlete always seemed destined to run.

“My goals are looking towards becoming the best marathoner I can be and winning the Boston Marathon,” said Flanagan. “Those are at the top of my list.”

Flanagan will run Boston in April, along with Goucher and Davila. The trio may make US marathon history in London, then more in Boston. No American woman has won Boston since Lisa Larsen Weidenbach (now Rainsberger) in 1985, the New York City Marathon since Miki Gorman in 1977, the Olympic marathon since Benoit Samuelson in 1984.

American record-holder Kastor was the last US woman to win an Olympic medal with a bronze at the 2004 Athens Games.

“Strong performances, top 5, and definitely a medal or two would further fuel the next generation of American girls,” said Wittenberg, who’s in London to watch the race.

On Sunday, the promising present of US women’s marathoning will be on full display on the streets of London.