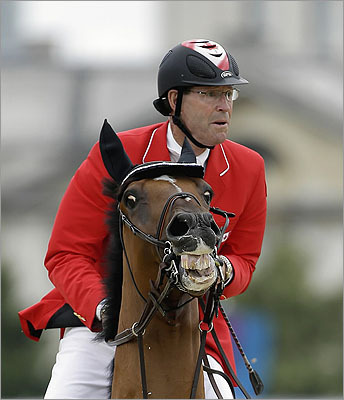 (Markus Schreiber/AP) Canadian Ian Miller, with his horse Star Power, competed in his 10th Olympics, the most of any athlete in history.
Associated Press / August 5, 2012
Text size – +

LONDON — Canadian equestrian Ian Millar rode into Olympic history Saturday by competing in his 10th Games — the most of any athlete.

The 65-year-old Millar, aboard Star Power, was riding in the show jumping qualifying round for individual medals. He surpassed Austrian sailor Hubert Raudaschi, who retired in 1996 after appearing in nine Games.

Millar has been an Olympic competitor for 40 years, and the only Games he missed since he began were the Western-led boycott of Moscow in 1980. His first Games were in Munich in 1972.

‘‘I am better now than I was then in knowledge and experience,’’ he said. ‘‘The age of the top riders tends to be older because it takes a lot of time to be consistent.’’

After his round, in which Star Power knocked down one fence, Millar said he feels the same physically as he did when he started his Olympic career. He will compete in the team event Sunday at Greenwich Park.

Millar is known as ‘‘Captain Canada’’ in his home country, where he is a national sports hero. He twice won jumping’s World Cup but has only one Olympic medal — team silver in Beijing in 2008. He contributed a clean round there to bolster his team despite riding with a broken hand.

He hasn’t ruled out the possibility of competing in the 2016 Games in Rio de Janeiro, but his horse’s age is more the issue than his own.

He said dropping a rail in the preliminary round Saturday was better than in the two-day team competition, which starts Sunday.

‘‘I would have preferred one less rail,’’ Millar said. ‘‘But better tomorrow or the next day.’’

Also on nine Olympics list is Latvian shooter Afanasijs Kuzmins, 65, who returned to Olympic competition last week after a break. His first Olympics was in Montreal in 1976, and he won gold in 25-meter rapid-fire pistol in Seoul in 1988.