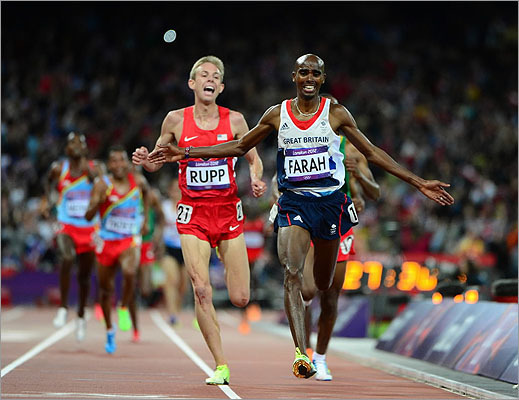 (AFP/GettyImages) Mo Farah was ecstatic after he and training partner Galen Rupp (left) of the US had a gold-silver finish.
By Shira Springer Globe Staff / August 5, 2012
Text size – +

LONDON — Midway through the men’s 10,000 final Saturday night, medal contenders from Ethiopia, Eritrea and Kenya were surging. Again. American Galen Rupp started to feel anxious about his position. He wondered if he should go with the African runners. Then, amid the almost-deafening cheers of 80,000 spectators at the Olympic Stadium, Rupp heard the familiar voice of his training partner, British runner Mo Farah, in his ear. At that critical moment, Farah, 29, was the prophetic voice of experience.

“Relax mate, everything’s fine,” Farah told Rupp. “We’ve just got to play it cool right now and save everything until the finish.”

And that was exactly what they did.

The Somali-born Farah broke away from a 12-runner pack at the bell, outkicking the field over the final lap. Spurred by the home crowd, he accelerated down the final straight to capture gold in 27 minutes, 30.42 seconds. Rupp moved from fourth to second in the closing sprint for silver, finishing in 27:30.90. Ethiopia’s Tariku Bekele took bronze in 27:31.43, besting his older brother and two-time defending Olympic champion, Kenenisa, for a spot on the medal stand.

“Today’s the best moment of my life,” said Farah. “It doesn’t get better than this. Being an Olympic champion is the best thing in the world. This is what we train for, why we put in all the hard work week in and week out, put in over 100 miles a week. Then, to have the Olympics right on your doorstep and to become Olympic champion, it doesn’t get any better than that. If it wasn’t for the crowd and the support I got today, I don’t think I would have won that gold because it was a very close race.”

Farah crossed the line in wide-eyed shock, put his hands to his head in an expression of disbelief, then collapsed to the track, overwhelmed by the moment.

In an event dominated by Ethiopians and Kenyans at recent Olympics, it was a history-making race for Farah and Rupp. Farah became Britain’s first Olympic champion in the 10,000. Rupp became the first American to win a medal since Billy Mills took home gold at the 1964 Tokyo Olympics. And Rupp is only the third American to ever medal in the event with silver for Lewis Tewanima coming at the 1912 Stockholm Games. Rupp acknowledged it “was a little weird” seeing Great Britain and the US at the top of the finish board in the 10,000.

“I still haven’t wrapped my head around the race and what just happened,” said Rupp. “I remember sitting down with Alberto [Salazar] when the Nike Oregon Project was started. We came out with the audacious goal that we were going to put Americans on the podium in distance races, in events that have traditionally been dominated by Africans. That’s something we’ve always been pointing towards.’’

Rupp added that Farah was the “missing piece” for him, that the British world champion brought his training and racing to the next level. It was 18 months ago when Farah joined Rupp and Salazar in Portland, Ore., believing the northwest distance running mecca would provide the best Olympic preparation. Farah and Rupp are best friends now, and video game playing partners, so close that Rupp considers Farah like a big brother. And the fast final lap, run in 53 seconds by Farah, felt a lot like practice sessions in Portland.

The atmosphere at the Olympic Stadium was beyond electric as British athletes notched three gold medals in the span of 45 minutes — Jessica Ennis in the heptathlon, and Greg Rutherford got the parade of victories started in the long jump. So, the crowd, which included the Duke and Duchess of Cambridge, William and Kate, was primed for a big performance when Farah entered the stadium.

“As I came through the tunnel, the people were just shouting out my name and saying, ‘Go Mo!’ ” said Farah, who grew up in London. “The atmosphere when you walk into the stadium was something else. I was really buzzing. It was like somebody gave me 10 cups of coffee. I was shaking almost. I had that feeling just walking into the stadium. And I was like, ‘Whoa.’ From that point, I knew somehow I had to do something. I was pumped up so much.”

Although the results of the men’s 10,000 were an upset of the traditional track order, the The top finishers of the women’s 100 were entirely predictable, with a mix of Jamaicans and Americans. Defending Olympic champion, Shelly-Ann Fraser-Pryce of Jamaica, took gold in 10.75 seconds.

American Carmelita Jeter finished second in 10.78 with the fastest runner-up time in Olympic history. Veronica Campbell-Brown posted the best third-place time ever with 10.81. Just out of the medals, American Tianna Madison finished in a personal-best of 10.85 with the fastest fourth-place finish ever, and Allyson Felix also set a personal best of 10.89, coming in fifth.