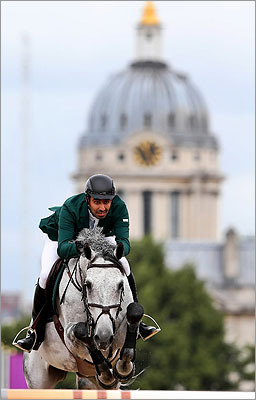 Another royal family is getting air time in the equestrian ring at Greenwich Park.

Prince Abdullah Al Saud of Saudi Arabia, a grandson of King Abdullah, jumped a clean round in good time in the qualifying portion of the individual show jumping competition Saturday. The top 60 riders advance.

The prince, whose father and grandfather are both fans and owners of racehorses, said he hoped his grandfather was watching on TV.

‘‘He’s the main sponsor for our team,’’ Abdullah told the Associated Press. ‘‘He sponsored us with all these good quality horses, and trainers and all good stuff — top stuff: grooms, blacksmiths — so I think he deserves to have watched his sons from Saudi Arabia having good rounds today.’’

Last week, it was the British monarchy in the limelight in the equestrian stadium: the queen’s granddaughter, Zara Phillips, was part of the silver-winning British eventing team, and her mother Princess Anne presented the medals.

Also in the arena that day was Princess Haya, the head of the International Equestrian Federation and a daughter of the late King Hussein of Jordan.