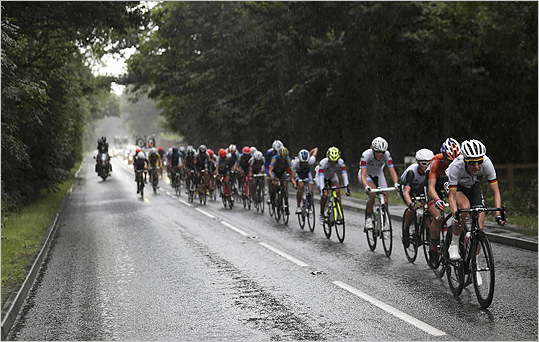 (AFP Getty Images) A surge of smartphone use by fans lining the route of cycling races on July 28 jammed signals from GPS locators attached to bikes. When TV commentators couldn't get real-time information, fans took to Twitter to criticize the coverage.
By Hiawatha Bray Globe Staff / July 31, 2012
Text size – +

Organizers and broadcasters who hailed the London Games as the first social media Olympics may now wish the events were a little less social, as heavy smartphone use caused technical glitches and Twitter became a worldwide platform for complaints about everything from ad sponsors to TV coverage.

After heavy use of smartphones interfered with live television coverage of cycling races, the International Olympic Committee on Sunday asked fans attending the Games to avoid sending text or Twitter messages. The surge of cellphone traffic had overwhelmed signals from GPS location transmitters attached to the racers’ bicycles, and TV commentators could not receive real-time information on the contests, including the locations of many riders. The committee did not return a request for comment, but a spokesman told the Reuters news agency that it was asking smartphone users to “please kind of take it easy.”

The failure of organizers to prepare for a surge in wireless traffic is inexplicable, said Mike Proulx, head of the digital strategy team at the Boston advertising firm Hill Holliday and coauthor of a book on social media. “It would seem that this would have been expected, given the inherently social aspect of the Games,” he said.

Laura Fitton, author of “Twitter for Dummies’’ and spokeswoman for HubSpot Inc. in Cambridge, a maker of marketing software, found it amazing that there was a shortage of wireless capacity at the Games. “Gosh, did they really not build in enough bandwidth for their cell network?” she said.

Fitton suspects organizers wanted to discourage live tweets and text messages because they compete with coverage from global media giants who have paid billions for the right to cover the Games. “All of the media companies trying to make money covering the Olympics are being undercut,” Fitton said.

Overall, Twitter reaction to the Games has been solidly positive. According to a Twitter sentiment tracker developed by Boston-based Sosolimited and published by British utility company EDF Energy, well over 60 percent of all messages posted about the Olympics since competition began have been favorable.

But that leaves plenty of room for hostile comment. In the United States, critics of NBCUniversal flooded Twitter with complaints about the network’s decision to broadcast most major events in prime time, hours after they have actually taken place. And in the Olympic village, US athletes took to Twitter to protest a rule forbidding them from appearing in ads for anyone other than official sponsors of the Games.

“It shows [the athletes] are taking direct control of how they hand out their opinions,” said HubSpot’s Fitton. “Before, they had to go through a spokesperson. Now they just hand it out through the phone.”

Such instant commentary has its perils. On Monday, Swiss soccer player Michel Morganella was expelled from the Games for tweeting racist comments about South Korean players; last week, triple jumper Voula Papachristou of Greece was expelled after she tweeted disparaging remarks about Africans.

Meanwhile, the Twitter hashtag #NBCfail has become popular with thousands of unhappy American sports fans, who use the account to criticize NBC’s coverage of the Games. Some have denounced NBC’s editing of the opening ceremony because the network omitted a tribute to the victims of the 2005 terrorist attacks in London, but most of the anger was roused by the decision not to show major events on live television because of the time difference between the United States and Great Britain.

NBC does show all Olympic events live, but only on the Internet or over wireless cellular data networks. On television, events are replayed hours later during prime time, when audiences are bigger and advertising revenues higher, but after results have been reported in other media.

“There is no point in watching your prime-time Olympic replay when I already know the results!” tweeted one user. Another complained that NBC’s own nightly news show revealed Olympic results hours before the events were shown on the TV network.

NBC officials downplayed the criticisms. “We’re enjoying tremendous success with our digital offerings,” the network said an e-mailed statement. “A small number of complaints, relative to the huge number of users, are a very positive early sign.”

On Saturday, NBC said, it delivered 7 million live video streams, much more than the 1.6 million offered during the first Saturday of the Beijing Games of 2008. The company said that TV ratings for the delayed broadcasts are the highest ever, with 40.7 million viewers watching the opening ceremony and 28.7 million tuning in for the first night of competition.

But the network’s recently hired chief digital officer, Vivian Schiller, irked many Twitter users when she retweeted a message from CNN producer Jonathan Wald that seemed critical of those who complained about NBC’s coverage. “The medal for most Olympic whining goes to everyone complaining about what happens every 4 yrs., tape delay,” the message said.

Schiller, who did not return a request for comment, later deleted the message from her Twitter account, but not before it spawned a flood of angry responses.

Twitter suspended the account of journalist Guy Adams of the British newspaper The Independent, after he tweeted the e-mail address of an NBC executive as part of a complaint about the network’s Olympic coverage.

NBC confirmed that it had filed a complaint with Twitter, “because a user tweeted the personal information of one of our executives.” Twitter officials did not respond to a request for comment.

Social media controversies have not harmed viewership of the Games, however. According to HubSpot’s Fitton, the resulting publicity could even lead to larger audiences: “Any outrage on social media ends up being advertising, too.”