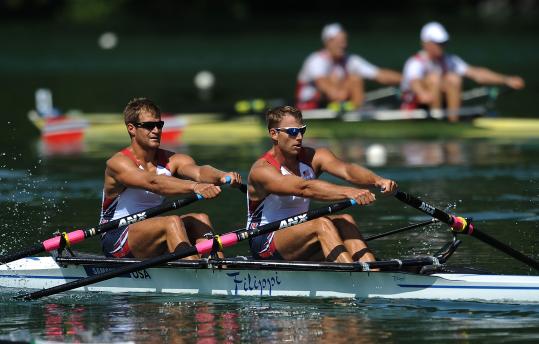 Will Miller and Glenn Ochal rowing for the US in the Men’s Double Sculls during Day 1 of the 2011 Samsung World Rowing Cup III on Lucerne Rotsee in Lucerne, Switzerland. Miller, a native of Duxbury and a graduate of Northeastern, now lives and trains in California. His father, Bill, rowed in the 1972 Olympics. (Christopher Lee/Getty Images)
By Jennette Barnes Globe Correspondent / July 22, 2012
Text size – +

Will Miller had been taking a rowing class in Duxbury for less than a year when his coach noticed him showing the kind of strength and determination that, just over a decade later, would lead him to the 2012 Summer Olympics.

Many rowers don’t have the opportunity to try the sport until they get to college, but Miller, 28, grew up with a father who rowed in the 1972 Olympics, coached university teams, and started his own rowing school in Maine.

The younger Miller played lacrosse for Duxbury High School  and only “dabbled” in rowing, he said, until his late teens, when he joined a newly established program at the Duxbury Bay Maritime School, just a short walk from the family’s Washington Street  home.

Tom Tiffany,  who coached him one  season at the school, remembers one particular day when Miller  stood out. The class — in four rowing sculls with the coach in a small motor boat — was heading from Duxbury  to Plymouth,  and Tiffany, a Minnesota  transplant, underestimated the power of the changing tide.

The boats circumnavigated Duxbury Pier Light,  also known as Bug Light,  between Saquish  and Plymouth Beach.  When they turned toward home, the outgoing tide was running against them.

Miller’s  four-person  boat pulled ahead and made it back first. They were a strong group, so Tiffany  wasn’t surprised, but their performance impressed him. And when the coach arrived at the dock, Miller  was waiting to make sure everyone made it back safely.

Today, Miller is less than a week away from competing in his first Olympic Games. He lives and trains in California, but spent part of July training with the team in Princeton, N.J., rowing four to five hours a day, before leaving for London last Thursday.

The 2012 Summer Olympics  will feature 14  rowing events, of which the United States  has qualified for 12.  They vary by configuration (one  or two  oars per rower), the number of rowers, and the weight of the rowers.

Miller’s team will compete in the men’s eight  — an event for boats with eight  rowers and a coxswain, who steers with a rudder. For the eight,  each rower uses one  oar, called a sweep oar, which is longer than the double oars used in sculling.

In a telephone interview, Miller  said his Olympic  debut still feels “a little bit surreal.” The team prepares the same way it does for any regatta, but the Olympics  are special, he said.

Since their first race is next Saturday morning, the day after the opening ceremony, his team won’t get to march in the parade of nations. All the waiting and standing and parading would sap too much energy from athletes who need to be in top form.

On the upside, though, the medal round for the men’s eight  takes place Aug. 1,  and after that, he will be free to enjoy the rest of the games without the pressure of competition.

Miller will meet up with his girlfriend; his brother, Chris; and his mom and dad. His parents couldn’t be more excited.

“This will be just the most amazing experience of my lifetime, to see Will row in the Olympics,” said his mother, Sally.

The couple is proud of both of their sons, she said. Chris,  24,  graduated from Parsons The New School for Design  and works as an art director for Sephora  in San Francisco.  Will, who earned a civil engineering degree, has been training for rowing year-round.

“As a parent, all you want is for your children to pursue something that they have a passion for,” their mother said.

Their father, Bill, insists Will has surpassed his own achievements in rowing, though both father and son were winners in England’s prestigious Henley Royal Regatta, the father in 1973, the son in 2008. Matching photographs of their winning Henley teams grace a wall in the family’s home. Both have also rowed in world championships.

“I’ve never had any expectations,” his father said. “All I can say is that he’s superseded anything that I’ve done.”

The elder Miller  got into rowing by accident. After graduating from Taunton High School,  he enrolled at Northeastern University.  During freshman orientation, a few rowers walked up to the tall, lean basketball player and asked him to join the crew team. He recalls saying, “How tough can it be if you’re sitting down, right?”

He’d never seen crew before. “The first time I had ever seen it was when I was sitting in the boat,” he said. He went on to coach rowing at Boston University  and MIT.

Will grew up observing rowing, but he didn’t spend much time pulling the oars as a child. He began rowing at the nonprofit Duxbury Bay Maritime School not long after it launched a rowing program in 2000. The school began offering sailing in 1998 after incorporating the previous year, according to executive director Chuck Leonard.

Today, it offers sailing and rowing, a sailing program for people with physical and cognitive challenges, and a variety of other activities, including recently added classes in stand-up paddle boarding.

When rowers are not on the water, they practice in the school’s “erg” room, which has more than 20 rowing machines, also called ergometers. The exercise room can be quite a social place, which led one frustrated rower to leave a plea on the message board: “If you can chat while erging row harder.”

Like his father, Will went to Northeastern.  It was nice to have Dad  around for advice, Miller  said, but he never felt like he was living in his father’s shadow.

Will did “sweep” rowing, in which each rower uses a single oar. After college, he switched to four-man  sculling. He worked with a Boston-based  coach who recommended him to a national coach in California,  and his rowing career took off.

He went back to sweep rowing for the Olympics  because the men’s eight  boat looked like it would do well. “I just saw a good opportunity to be with a good group of guys,” he said.

Bill Miller, whose Olympic  team didn’t make the finals, said his son’s team has an excellent chance not only of making the finals but of winning a medal.

Jennette Barnes can be reached at jennettebarnes@yahoo.com.