Participation goes up in Olympic years, but speed skating is for the few 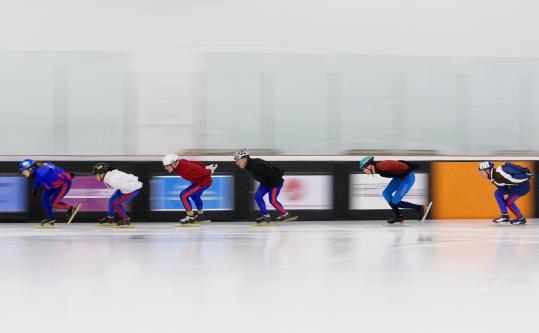 Inside the frosty oval, there’s a chorus of dull scrapes and a slight whoosh of air.

Hunched forward, hands clasped behind their backs, blades slicing the ice, a pack of speed skaters in snug Lycra suits race around and around.

Calls come from center rink, where coaches in blue stand with stopwatches.

After several passes, Andrew Curtis skates over, out of breath, cheeks flushed.

“I played hockey, but I didn’t care about big rubber pucks,’’ says the 16-year-old Bridgewater resident and member of the Walpole-based Bay State Speedskating Club. “It’s the only kind of skating I ever really liked.’’

Every four years, the Winter Olympics draw the public eye to some of the more obscure recreations of colder climates: curling, luging, bobsledding - and speedskating. And every four years, without fail, the Bay State Speedskating Club sees a roughly 50 percent, short-term bump in its membership, as network TV brings athletes like Bonnie Blair and Apolo Ohno into the living rooms around America and beyond.

Over the last two decades, the club has even cultivated five Olympians (including bronze and silver medalists).

But long after the current Olympic Games wrap up next Sunday, and interest fades, the dedicated members of the Bay State Speedskating Club will keep their elongated blades sharp and their helmets on tight.

The group maintains a core of about 50 members, ranging in age from 7 to 60, most men, as women are often drawn away by figure skating, according to coach Joanne Hallisey. They gather several times a week at the Iorio Arena in Walpole.

Indeed, US Speedskating recognizes only about 75 clubs in this country, according to its website. Most are clustered on the East Coast and in the Midwest, but there is a smattering in Florida and California.

But it’s precisely that obscure - even fringe - aspect that attracts some to the sport.

She’s one of the many who were lured in by the Olympics - it was watching Ohno that did it - and, since 2006, she has stuck with it.

The sport is “so fast and powerful,’’ said the ponytailed 48-year-old in a blue Lycra skate suit.

When she first started, she hadn’t skated for 30 years, since her teens.

Now, “slowly but surely, my times are coming down,’’ she noted before strapping on her light blue helmet and kicking off.

Curtis is working on that, too. On this night, in the biting chill of the arena, he chased down a 10.7-second lap - something he hadn’t been able to do in a long time, because he had gotten out of practice.

The teenager - 6-foot-2 in skates, shadows of a mustache shading his lip - has been skating for about nine years and has participated in national trials twice.

It’s exciting, he said - unpredictable. “You never know what someone in a race is going to do.’’

Alexander Wolfe - on the other end of the height divide from Curtis, at 4-feet-7 - also called speed skating “exhilarating.’’

“You’re trying to stay up on quarter-inch blades while going 20 miles an hour,’’ said the Wellesley 10-year-old, who has five years of experience etching the ice.

Just as it sounds, speed skating is a rapid form of racing across the ice; the top skaters can rocket at more than 30 miles an hour in short- and long-track events.

Getting there takes technique: ducking low, keeping arms tight to the sides, clasping hands behind the back; all to cut wind resistance.

It’s an unnatural position, noted Hallisey, and difficult to master. The blades are similarly “tricky,’’ she said; they can be twice as long as those of hockey players, and they are curved.

All this training isn’t just for the thrill: Club skaters often race in regional meets and national competitions, and of course, there are the chosen few who make it to the Olympics.

Hallisey’s daughter is among them. Now retired from racing, Caroline Hallisey, 29, competed in the Olympic Games in Nagano, Japan, in 1998; Salt Lake City in 2002; and Torino, Italy, in 2006. While she never medaled, she came as close as fourth.

Her mother got her family into speed skating when Caroline was just 2. By age 4, the agile youngster was already gliding along in speed skates.

As for her own affinity for the sport, Hallisey explained as she stood center-rink, “You don’t have to worry about a stick - it’s pure skating.’’

Minutes later, a half-dozen skaters whipped around her in rapid loops.

Moving in packs - what’s known as “drafting’’ - they swirled over the Olympic-sized, 111-meter-long rink. With each pass, as they reached the curves of the oval, the skaters hunched even lower, stretching out an arm for balance, fingers barely touching the ice.

“Bend those knees, guys!’’ Hallisey yelled as she looked on, glancing at a timer slung around her neck.

Ultimately, though, the goal is not only endurance but a certain dexterity.

“You want to be very, very efficient while you’re skating,’’ Hallisey said. Skaters try not to waste a bit of energy or a single movement.

Still, it’s not just logistics - these ice-dashers described it as a cerebral trial, too.

And, while the goal is to make it look “peaceful, Zen-like,’’ essentially effortless, Chadis noted with a smirk, “if it were easy, everyone would be out here.’’

50%
Increase in club membership in an Olympic year. The interest lasts about a year, then tapers off.