THIS STORY HAS BEEN FORMATTED FOR EASY PRINTING
Luge 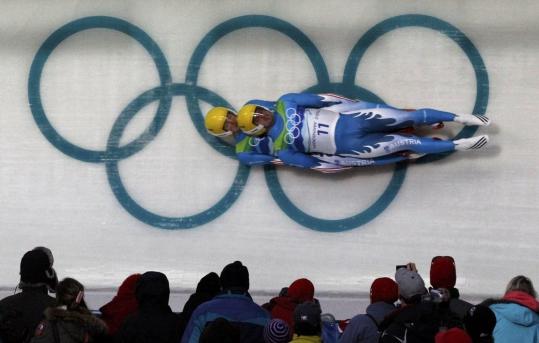 Brothers Andreas and Wolfgang Linger, who were introduced to luge when they were sent down a speedy track in the Alps, won their second consecutive Olympic gold medal in doubles yesterday, just the second tandem to win in consecutive Games.

The Lingers completed their two heats in 1 minute 22.705 seconds. Andris and Juris Sics of Latvia finished in 1:22.969 to take silver, and Germany’s Patric Leitner and Alexander Resch took bronze in 1:23.404.

The Lingers joined Germany’s Hans Rinn and Norbert Hahn (1976 and 1980) as the only team to repeat as champions.

“Just great,’’ Andreas Linger said. “We’ll realize it in a couple of days, I think.’’

Christian Niccum and Dan Joye of the United States were sixth. Americans Mark Grimmette and Brian Martin, doomed by a bad start on their first run, finished 13th and missed a chance to add to the bronze and silver they won at previous Games.

“So that’s the way the cookie crumbles,’’ Martin said.

The Lingers were typical European children. They played soccer, went skiing and dabbled at a few of the team sports. But once they tried luge, the Linger boys separated themselves from the other kids. Invited to try the track at Igls, site of the sliding events for the 1964 and 1976 Innsbruck Games, they proved to be naturals on the ice.

Fearless and fast, they began a sliding career in tandem that has now made two pit stops atop the Olympic podium.

When they skittered into the finish area and the second gold was theirs, Andreas clenched both fists in front of his face and screamed. Then, he sat down on the track wall next to his younger brother, pulled his red sled off the track and planted a kiss on it.

Moments later, the Lingers threw their arms around each other’s shoulder and wrapped themselves in an Austrian flag.

There would be no such moment for Grimmette and Martin, sliding in their fourth Olympics.

Just like the US women lugers, the start finished the Americans.

Actually, the competition began at the sixth curve on the 16-turn track after officials, concerned for the athletes’ safety, moved all three luge competitions lower on Blackcomb Mountain to slow racers following the death of Georgian men’s slider Nodar Kumarishtavili, killed in a crash during practice last Friday.

Grimmette and Martin had trouble negotiating the hard left during practice earlier this week, but seemed to have figured it out Tuesday when they had the second-best times.

But after paddling away from the starting bars, the most decorated doubles luge team in US history took the wrong approach into the tricky turn and found themselves wobbling for a few critical seconds, just long enough to see their gold-medal hopes evaporate.

Once at the bottom, Martin yanked off his face shield and waved his arms in disgust.

“We brushed up on the wall, and that messed up our timing,’’ Grimmette said. “Racing is always fun. It can be frustrating, very frustrating at times, but it’s always fun.’’

By the time the second heat began, the sun had sunk behind the snow-capped mountains.

Things had darkened for the Americans much earlier.

“It’s hugely disappointing,’’ said Martin, the back driver. “We did it [the initial turn] so well yesterday, twice. I was cautiously optimistic, but I was optimistic that we had it figured out. I’d kill for 10 more runs from that start to really figure it out, but we didn’t have that opportunity.’’