THIS STORY HAS BEEN FORMATTED FOR EASY PRINTING
Biathlon 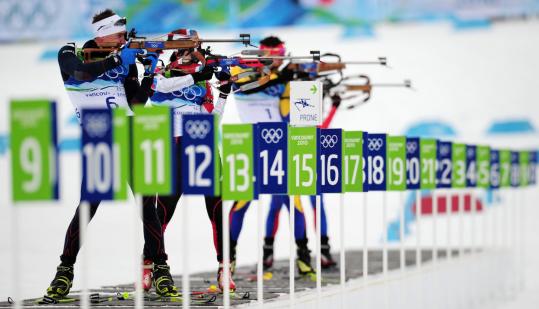 Vincent Jay (No. 6), buoyed by a superb shooting performance, won gold in his Olympic debut. “I love this place,’’ he said. (Shaun Botterill/Getty Images)
By Mattias Karen Associated Press / February 15, 2010

Emil Hegle Svendsen of Norway won the silver medal, 12.2 seconds back. Jakov Fak of Croatia got the bronze, finishing another 1.8 seconds behind. All three medalists were among the first 10 starters, who were able to ski their first two laps around the course before the snowfall began.

“I was very lucky as far the weather conditions,’’ said Jay, who had bib No. 6 among 88 racers in the interval start event. “But the shooting was all my doing, and had nothing to do with the climate.’’

“I thought for the guys coming in behind, it was going to be hopeless,’’ Svendsen said. “The conditions have played a very big role today. But that’s the way it goes. That’s outdoor sports. You can never predict what’s going to happen.’’

Jay capitalized on superb shooting and a little luck. With the wet snowfall making conditions difficult for most of the favorites, Jay shot cleanly and took advantage of an early start number to finish in 24 minutes 7.8 seconds.

The 24-year-old Frenchman was the second surprise winner in two days at the biathlon venue; Anastazia Kuzmina of Slovakia won the women’s sprint Saturday. Jay seems right at home in Whistler, where last season he enjoyed his only World Cup victory.

“I love this place,’’ said Jay, who has never had another top-three finish on the World Cup circuit. “There is nothing very special about the course. There’s no great descent or uphill part of the course. But the whole thing really pleases me.’’

Svendsen was the fastest skier despite having struggled with illness lately, but a missed shot in the prone position cost him the gold.

“For me it’s been quite a lot of trouble coming into these Olympic Games,’’ said Svendsen, who battled a severe cold in the leadup to Vancouver. “So to get a silver is great.’’

Bjoerndalen is a five-time Olympic champion, but his hopes for gold No. 6 ended at the first shooting range. He missed three shots in the prone position and had another miss in the standing to finish 1:41.1 behind Jay in his worst Olympic finish.

In 11 events over three other Olympics, Bjoerndalen had finished lower than fifth only once - when he was 12th in this event in Turin. His three misses from the prone position matched the most of any competitor and his four total penalties tied for second most.

“I was very bad at the first shooting,’’ Bjoerndalen said. “It was not because of the conditions, it was my own mistake. It just wasn’t my day. I did two very good rounds, but when the snow came down it was hopeless.’’