After year of slipping up, Nagasu polished her act 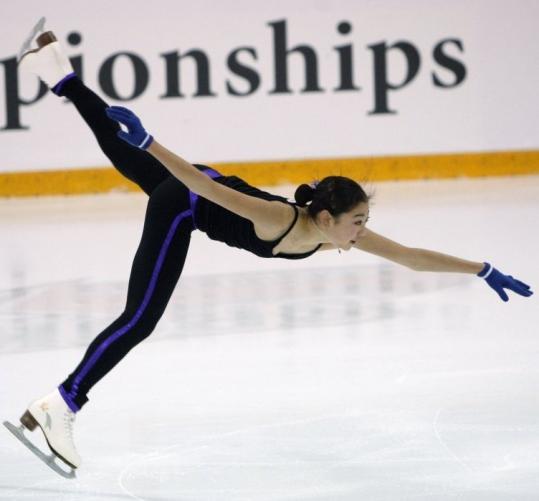 Young Mirai Nagasu had better be on her toes at this week’s US Championships, because the competition could be stiff. (Rick Bowmer/Associated Press)
By John Powers Globe Staff / January 21, 2010

SPOKANE, Wash. - Her name in Japanese means “future,’’ but there were times last year when Mirai Nagasu’s time already seemed past at 15. She had gone over to the “dark side,’’ she said, becoming moody and mutinous. Her body was playing pubescent tricks on her. She went to the US Figure Skating Championships as defending titlist and finished a tear-spattered fifth, missing the world team.

Was Nagasu a one-hit wonder, the Toni Basil of figure skating?

“She won so early that it was a shock and a surprise,’’ said her coach, Frank Carroll.

So, too, was last year’s implosion. Now with her annus horribilis behind her and the Winter Games less than a month away, Nagasu figures to be in the mix this week for one of the two spots for Vancouver at the US Championships here, in what may be the most wide-open women’s competition in history.

“Someone will arise from amongst us,’’ said Nagasu, who takes to the ice for the short pro gram tonight.

What it will take is seven solid minutes across two evenings, and résumés won’t matter as much as they once did under the 6.0 scoring system, when judges more easily could prop up favorites. Last weekend, Keauna McLaughlin and Rockne Brubaker, the two-time pairs champions, finished fifth, and eight-time medalists Rena Inoue and John Baldwin were outpointed for the Olympic team by Amanda Evora and Mark Ladwig, who never had made a global team. And Evan Lysacek, who finished second to defending titlist Jeremy Abbott, will be the first American world champion to go to Olympus without the national crown.

Cohen, who will be bidding for her third trip to Olympus at 25, normally would be the woman to beat, but she hasn’t competed since the 2006 World Championships and sat out the entire fall season with a calf problem. Hughes, who stepped in on short notice for Michelle Kwan four years ago, has missed the last two nationals with injuries and is taking time off from Harvard to compete. Czisny, who won her first US title in her eighth attempt, was only the third-ranked American during the Grand Prix season.

Wagner and Flatt have been the two steadiest performers but Nagasu beat both of them when she won the crown in St. Paul two years ago. She was 14 then, too young to compete at the World Championships, but she submitted two solid programs. When Kimmie Meissner, the defending champion and former world titlist, fell three times during the free skate, Nagasu inherited the crown.

“I won? I won!’’ she exulted in disbelief, becoming the youngest victor since Tara Lipinski in 1997 and the first woman to win the junior and senior events in successive years since Joan Tozzer in 1938.

That was Nagasu’s last great moment on an ice rink. She grew 3 inches (to 5-3) during the following year and her sudden height made her feel disoriented while jumping. Then adolescence knocked her for a loop.

“It was like teenageness hitting me full on,’’ Nagasu said. “I was really surprised at how much I rebelled. A little rebellious is good, but last year was just too much.’’

A cranky ankle bothered her for all of last season, but she still felt compelled to defend her title in Cleveland.

Nagasu essentially was finished after the opening minute of her short program, when she hit the wall on her first jump and was buried in sixth. Though she performed decently in the free skate, she didn’t come close to making the team for the World Championships in Los Angeles, which is barely a dozen miles from her Arcadia hometown, and she ended up watching from the stands.

“It was so disappointing,’’ Nagasu said. “I hope I never have to feel that again. Most of the time I was thinking about how that could have been me, but it was what it was.’’

After the season, she parted company with Charlene Wong, who had coached her for nearly three years.

“There was a lot of disagreement between me and her,’’ Nagasu said. “We’d lost the trust between us. I thought it was time for a change.’’

So she signed on with Carroll, who had mentored Olympic medalists Linda Fratianne, Tim Goebel, and Kwan and who coaches Lysacek.

“Mr. Carroll is the best and wants the best,’’ Nagasu said. “I listen to everything he tells me. He’s like the king of the rink, and what he says goes.’’

What her new coach told her was to lose both some weight and some attitude.

“She’s very naughty,’’ said Carroll, who coached skating’s all-time bad boy in Christopher Bowman, the self-styled “Hans Brinker From Hell.’’ “Her personality is very challenging. I kicked her out of the rink one day and she came back the next with angel’s wings on.’’

Nagasu’s skating indeed can be ethereal.

“She has this darling personality that sparks and twinkles,’’ Carroll says. “She doesn’t skate like a deadhead.’’

What she needs to return to the top of the podium is the confidence that she belongs there, that her 2008 title wasn’t merely beginner’s luck.

“A big problem Mirai has is low self-esteem,’’ said Carroll, who believes that it stems from her Japanese background (her parents are immigrants who run a sushi restaurant and she has dual citizenship) and the pressure that she feels to be perfect. “Basically, nothing is good enough, everything could be better. She’s been very hard on herself and demanding of herself, unnecessarily.’’

Carroll saw that firsthand at their first competition together last fall at the Cup of China in Beijing when Nagasu won the short program - and promptly burst into tears, fretting about being expected to win. Nagasu subsequently fell apart in the long program and ended up fifth.

“I said, ‘Look, honey, you have to have some control of your emotions,’ ’’ said Carroll. “ ‘If I go to Skate Canada with you and you shed one tear, I’m getting your bag and we’re going to the airport in a taxicab and we’re leaving the country.’ ’’

Nagasu had a better weekend and dry eyes in Canada, and her work in the practice rink during the past weeks has been exemplary.

“She’s fabulous at the moment,’’ said Carroll. “She’s skating out of sight. I just hope with all my heart that Mirai goes out and shows everyone what she’s capable of.’’

For two starry nights two years ago, Nagasu showed a glimpse of the future. This year has been about tossing away the 2009 calendar.

“I think it was a gift of God almost that I suffered all of last year because I have all of this motivation stored up inside me,’’ Nagasu said. “It’s kind of a repeat of novice year when I fell on all my jumps. Hopefully I’ll be able to do the same, where I rise again from the ashes like a phoenix.’’