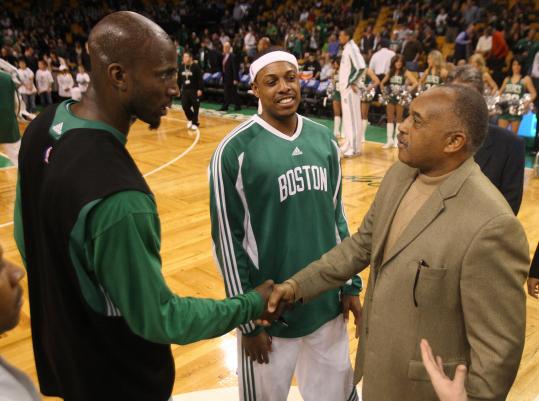 But this time they were clasped in victory and not burdened with pain.

Watching Barack Obama become the first African-American president from their hotel room in Boston with their wives, both men wept. Carlos called the event "the greatest day of my life."

Tonight the Center for the Study of Sport in Society at Northeastern University will induct the pair into the Hall of Fame during the 14th annual True of Sport Awards Gala at the Joseph B. Martin Conference Center at Harvard Medical School.

Such honors have come belatedly - and at a cost.On Oct. 16, 1968, 200 winner Smith and Carlos stood on the medal stand with heads bowed and gloved fists pointed skyward during the US national anthem. It was one of the most powerful images of the 20th century.

Both said they were expecting to be gunned down at that moment.

"Hell yes, we thought we were going to get shot," said Carlos, who along with Smith does motivational speaking.

Carlos, 63, remembers the scene vividly. He and Smith were waiting in "the dungeon," a dark room off a tunnel under the stands of Olympic Stadium, for the medal ceremony - two San Jose State sprinters about to take a leap of courage.

Recalled Carlos, "I remember telling Mr. Smith, 'Remember when we get out there, we've been trained as runners to listen to the gun. So when we get out there and do what we do, if the hammer hits that bullet, hit the deck. Don't be just a duck on the table for them to just shoot at.' "

Smith, who had just set a world record in the 200 in 19.83 seconds, prayed as he silently protested on the podium.

"The fist in the air to me meant people of color coming together to make this a better society," said Carlos, who grew up in Harlem.

"It was very simply a cry for freedom on the victory stand," said Smith, who lives in Stone Mountain, Ga.

The year 1968 was one of the most turbulent in US history. Martin Luther King and Robert Kennedy were assassinated two months apart. Riots burned out inner cities and American blood flowed in an unpopular war in Vietnam.

Smith and Carlos were members of the Olympic Project for Human Rights, which pressured the International Olympic Committee to ban South Africa for apartheid. African-Americans considered boycotting the Olympics, but ultimately left it up to the individual.

Some, like Lew Alcindor, didn't try out for the basketball team. Others did nothing on the victory podium. But not Smith. He had a plan.

"I told my wife to bring some gloves and she said, 'Why? It's hot there,' " recalled Smith, "and I said, 'I have some representation of what I want to do.' "

Smith took the right glove and asked Carlos if he wanted the left.

Smith and Carlos wore black socks and went shoeless on the podium.

"We ran in black socks to exemplify the feeling of black pride and poverty," said Smith.

He's not sure if his heart was pounding faster on the podium or during the homestretch of the race.

"That's a heavy question that I've never been asked before," he said. "Neck and neck, I'd say. I had to win to get on the victory stand to do what I did when I got there. I just know my heart was racing high above normal the whole time. My palpitations were off the charts."

He could not look at the American flag.

"I'd rather pray than look at the flag at that time, " he said.

Carlos wore beads to the ceremony to "illustrate the love for humanity and also to remember the suffering and sacrifice that individuals of color had to endure with hangings."

Leaving the stadium, Smith raised his fist a second time in response to boos and vulgar catcalls.

"Looking up in the stands, I saw faces of animals," said Smith. "All I saw was hate. I never escaped the n-word."

Smith and Carlos were tossed off the Olympic team. Even the African-American community had mixed feelings about the gloved fists. Bad fortune followed them.

"I couldn't find a job when I left," said Smith. "A world record-holder - the only job I could find was washing cars in San Jose at All-American Pontiac."

Smith, the seventh of 12 children born to a sharecropper, said his family also suffered.

In the family mailbox in rural Lemoore, Calif., there was constant hate mail, as well as manure and dead animals.

"My mother consequently died of a heart attack [in 1970]," said Smith. "Stress and tension can do things to the body that nothing else can do. "

He remembers burning furniture in the fireplace so his children could be warm at night.

"I couldn't pay the electricity bills," he said. "You can replace furniture. You can't replace kids."

His first wife couldn't stand the hate and pressure. She committed suicide.

Even silver medalist Peter Norman of Australia, who shared the podium and put on a human rights badge to show his support, was ostracized back home. When Norman died in 2006, Smith and Carlos were pallbearers and delivered his eulogy.

Smith says the fist overshadows his running career. Both men had very brief pro football careers cut short by injuries. Both coached and taught others about human rights. Only in recent years have the honors started to trickle in. In 2005, San Jose State unveiled a 20-foot statue commemorating the protest. Last year they received the Arthur Ashe Award for Courage at the ESPY Awards. On Monday night, the Celtics presented them with a Heroes Among Us Award.

"I held 11 world records simultaneously. I'm most proud of my work ethic. I'm proud of giving back."

"I can change the world by my intellect and my dialogue," he said. "I learned never to let anything stop your dreams."

Yesterday, Smith watched Obama speak and wiped tears of joy from his eyes.

"We are just starting," he said. "We will have our day in the sun."