THIS STORY HAS BEEN FORMATTED FOR EASY PRINTING
Synchronized swimming 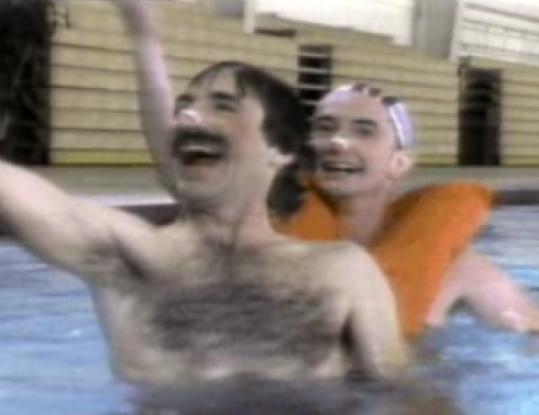 BEIJING - Barred from wearing suits that made them look like waterproof Christmas trees, the Spanish team took a different tack.

They marched onto the deck at the Water Cube in costumes embroidered with a menacing cartoon character across the front and back, his cap backward and carrying a stick in a threatening manner.

This is synchronized swimming, a sport that requires as much strength, stamina, and skill as any in Beijing - but still draws snickers from those who believe the gelled-up hair, caked-on makeup, and outlandish suits are better suited for a Vegas show.

A "Saturday Night Live" bit from 1984 is usually a starting point for any discussion with the uninformed. Adorned with noseclips, Short and Harry Shearer played brothers who dream of being the first males to compete at the Olympics in synchronized swimming. Never mind that Short has to wear a lifejacket because "I'm not that strong a swimmer."

"You would be surprised," said Andrea Nott, who competes for the United States in both the team and duet events - and, no, she doesn't wear a flotation device. "That was more than 20 years ago and people still say, 'Hey, I saw the 'Saturday Night Live' skit.' "

"We do it because we love it and there's enough satisfaction in it for us," Nott said. "If some people think it's dorky, well, they don't have to watch it."

Judging from the packed stands at the Water Cube, plenty of people enjoy a sport that combines the artistry of ballet with the athleticism of an acrobat show, all in the water.

American coach Tammy McGregor, a gold medalist in Atlanta, said many misconceptions about the sport originate in her own country, even though the US was a powerhouse when synchronized swimming was added to the Olympics at the 1984 Los Angeles Games.

"Our country is very focused on football, basketball, and baseball," McGregor said. "When we go to Japan, people go nuts for synchro. A venue like this one here would be sold out wall-to-wall for the world championships. When we go to Europe, it's the same way. It's really only the Americas" where people are hung up on the is-it-a-sport debate.

Before every competition, synchro swimmers wet their hair, pull it back in a tight bun using old-fashioned bobby pins, then apply a gel to remove any chance of it getting in their face during the routine. There's no skimping on the makeup, either.

There are other issues. For some reason, every performance begins with the pair or team marching onto the specially built deck with an exaggerated waggle, throwing themselves around as though they were playing a game of Twister, then turning to the judges with a freeze-frame smile before they dive in.

"It's really just setting you up," McGregor said. "It's that first impression. If you didn't have the most amazing deck pose, I don't think that would really make a difference. It's just a bonus deal." (AP)