THIS STORY HAS BEEN FORMATTED FOR EASY PRINTING
Boxing

Low blow: US leaves with one medal 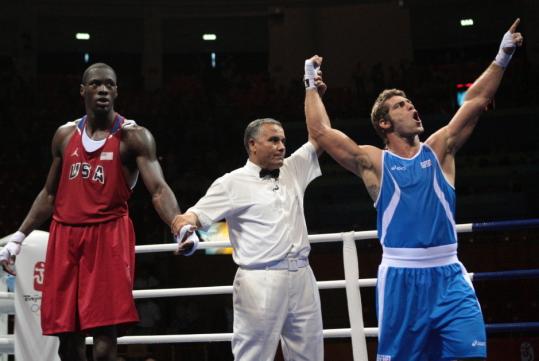 BEIJING - Deontay Wilder was the last American standing in Olympic boxing. That also made him the last US fighter to lose in the team's worst performance ever.

Wilder goes home with a bronze after being outclassed and outpointed by amateur heavyweight world champion Clemente Russo in the semifinals yesterday. It was a classic mismatch in which Russo controlled all the action, never letting Wilder get on track. The 7-1 score was only that close because Russo fought defensively after building a lead he knew the raw Wilder couldn't cut.

The lone medal meant the United States equaled its 1948 showing in London - except that medal was a silver by Horace Herring at 147 pounds.

But Wilder wasn't crushed by failing to make the gold medal bout, or by failing to get a point against Russo until eight seconds remained in the fourth and final round.

"Guys with my experience don't do that well against guys like that," the 22-year-old from Tuscaloosa, Ala., said. "I think it's a points thing, although I think I scored more than that. That's life. You have a setback sometimes. You've got to live with it.

"To be here and win a medal is great. I'm not a guy to complain. I'll get back in the gym to work and get better."

That's something the entire US team needs to do in a big way.

Coach Dan Campbell would not discuss the weak showing in Beijing, but did explain what happened to Wilder, who has been boxing for fewer than three years.

"It was his inexperience, and the guy he's fighting," Campbell said. "The guy had a sound game plan, boxes well, and uses his legs well. There were some execution things we wanted to do and didn't. We wanted to take the fight to him and we didn't."

Wilder will take his bronze medal home to 3-year-old daughter Naieya, who has spina bifida. He has a tattoo on his chest with her name that serves as his inspiration and helped carry him farther than any of his teammates.

Wilder once worked as a beer truck driver and in a restaurant to help pay Naieya's massive doctor bills. He's very raw as a fighter, but his size (6 feet 7 inches, 200 pounds) and intelligence make him a good professional prospect. Owning a bronze medal can't hurt his stock, either.

But he's not thinking much about turning pro and plans to return to college for a business degree. Asked when he might fight for one of the heavyweight belts in the professional ranks, Wilder smiled widely.

"There's no way to see the future. What will happen happens," he said. "But my work ethic, my big heart, my determination - those are my strengths."