US falls to Japan in final gold medal game 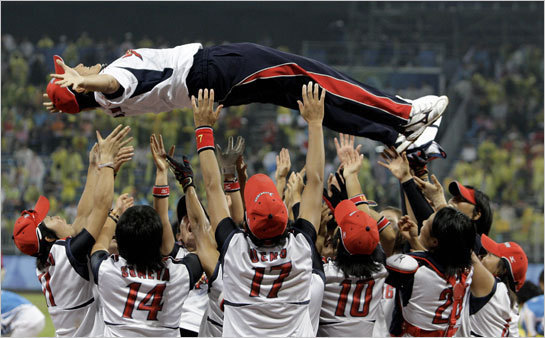 (AP) After handing the US its first loss in eight years, the Japanese women's softball team celebrates winning the gold medal by tossing their coach Haruka Saito in the air.
By Gregory Lee Jr. Globe Staff / August 21, 2008
Text size – +

The United States has been the dominant program, winning three gold medals, since the sport was added in 1996.

Perhaps the IOC thought the world would not catch up to the Americans considering they had a 31-4 record in Olympic play heading into today's gold-medal game against Japan.

Clearly the Japanese have caught up to the Americans by taking a gritty, 3-1 victory before a rain-soaked crowd at Fengtai Softball Field.

“It’s interesting because everyone says all the time that we win and no one can compete,” said American left fielder Jessica Mendoza. “It was proven today that (other) teams can (win). The sport should remain, it’s global.”

The Japanese scored the game’s first run in the third inning when they capitalized on second baseman’s Masumi Mishina’s leadoff double. Mishina was sacrificed to second. With two outs, right fielder Ayumi Karino slapped a 2-2 pitch to bring in the first run.

The Japanese struck again in the top of the fourth when center fielder Eri Yamada, who went 2-for-3, hit a leadoff home run to center, giving the Japanese fans belief that they could upset the Americans.

The Americans, who entered yesterday’s game hitting a tournament-best .347 and averaging seven runs per game in their eight contests, would only muster five hits. The lone run came off the bat of its leading hitter, Crystal Bustos, who led off the fourth with a home run to right-center.

Otherwise, Japanese pitcher Yukiko Ueno, who threw 21 innings the previous day, kept the Americans off balance by changing speeds and going to both sides of the plate to earn the complete game victory.

“She threw good enough to win tonight,” said US coach Mike Candrea. “She relies on spotting pitches. We hit the ball hard. We had opportunities. We couldn’t find a hole when we needed to.”

The Americans left seven players on, including the bases loaded twice with less than two outs in the first and sixth innings.

The American had a chance to make an opening statement in the bottom of the first inning when shortstop Natasha Whatley led off the game with a single and Caitlain Lowe followed with a single to right. Jessica Mendoza hit a shot to third but Whatley was forced at third base.

Then Bustos, who entered the game hitting .500 with five homers (including the game-winning, three-run homer against the Japanese on Wednesday), reached on a fielder’s choice as Mendoza beat out the throw to second base.

However, right fielder Kelly Kretschman hit a grounder to second baseman Masumi Mishina, who threw the ball to home to force out Lowe for the second out of the inning.

The threat ended when Andrea Duran popped out to the catcher. The Americans were held hitless until the fourth inning when Bustos hit her sixth homer of the tournament.

American lefty pitcher Cat Osterman, who gave up no runs and three hits in her 15 innings during the tournament, was not her sharpest. She gave up two runs on three hits in five innings of work. The two earned runs were the first given up by the team in the tournament.

“Honestly it wasn’t a bad performance,” said Osterman, who struck out five of the first six hitters she faced. “I threw two bad pitches, the double and the home run. They did it at the right time. I take back two pitches. I’m not hanging my head too much.”

The Americans had one final rally in the bottom half of the sixth inning. Lowe led off with a slap single to right and was sacrificed to second by Mendoza, a move that was questioned because it left first base open for the Japanese to intentionally walk Bustos.

The Japanese did just that.

“We were trying to manufacture runs,” Candrea said. “We play the game the way we supposed to.”

Added Bustos: “I expected that one. I told Kelli (Kretschman) when I was walking down the line ‘Now’s your time. Coach has faith in the whole team and this is what we live by.”

Kretschman followed with a walk to load the bases. But Duran popped up to short and catcher Stacey Nuveman, who stranded four runners Wednesday, popped out to second to end the final rally.

“They played better ball than we did today,” Nuveman said. “We had opportunities and couldn’t get that big hit. So we can look back and kick ourselves. But we got to give them credit for the things they do.”

The Japanese sealed the Americans’ fate by adding a run in the top of the seventh as the American defense came unglued with two fielding errors that led to the final run of the game.

“We win as a team, we lose as a team,” said shortstop Natasha Watley, who had one of the two errors in the final inning. ‘‘It hurts to lose.”

However, players from both sides see a greater loss as there will be no participation in the 2012 Games in London.

A movement called the Bring Back Softball campaign is under way to bring the sport back to the Games in 2016.

“It is probably our last Olympic Games,” said Japanese coach Haruka Saito. ‘‘It is a big encouragement and motivation for us to get softball back into the Olympic Games. We will promote it all over the world.”

On Friday a new international softball event will be announced in an effort to maintain the momentum the sport has generated from this year’s tournament.

But for the Americans, the pain of today's loss will remain fresh in their minds. It was a missed opportunity to collect all four golds in the tournament’s history. The future of the game is a distant thought.

“Honestly, I have not thought about it,” Osterman said. “The loss hurts in the present moment.”