THIS STORY HAS BEEN FORMATTED FOR EASY PRINTING
Water polo 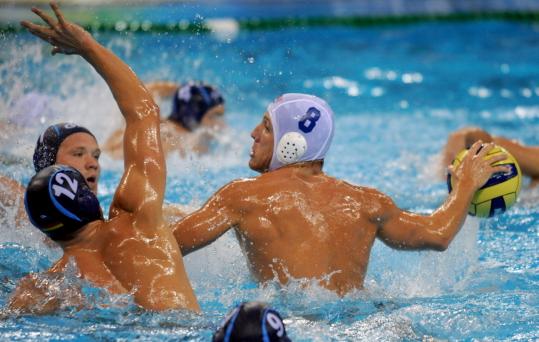 BEIJING - United States captain Tony Azevedo climbed out of the pool and started congratulating each of his teammates.

Hugs, handshakes, and high-fives all around.

Maybe Azevedo should have done more - especially given the significance of the moment - but the US men's water polo team hasn't had much experience celebrating at the Olympics in the last two decades.

Azevedo and his teammates won't have that excuse next time around.

The Americans continued their improbable run in Beijing with an 8-7 victory over Germany yesterday, winning their preliminary group and earning an automatic berth in the semifinals. The US is guaranteed of finishing at least fourth, which would match the program's best showing since 1988.

"It's one of the greatest feelings," said Azevedo, a three-time Olympian. "For 10 years, I've been working as hard as I can and have sacrificed so many things. To lose that game over and over again has been just devastating.

"To come out today and be in that final four, it's a great feeling. We're definitely the underdog story."

The Americans will face the Serbia-Spain winner Friday. Serbia lost its preliminary finale, falling, 13-12, to Italy, and some believed the Serbs faltered on purpose.

Had Serbia won, it would have been in the same bracket as rival and reigning European champion Montenegro and two-time defending gold medalist Hungary. A loss meant Serbia would face Spain and then the US.

"I heard chatter about that in the [Olympic] village," US coach Terry Schroeder said. "They're thinking it's an easier path to the gold medal. It's a little bit of disrespect. There's motivation for us. If Serbia gets that far, we'll be ready for them."

Serbia's "performance" was a hot topic at Yingdong Natatorium. Croatian players and coaches said it was clear the Serbs intentionally lost, from starting their backup goalkeeper to falling behind by four goals in the second half to some of the shots they took throughout the game.

"Everybody knows what's happened," said Croatian coach Ratko Rudic, whose team likely would have won Group B had Serbia beaten Italy. "It's a question for FINA, not for me."

Serbian coach Dejan Udovicic denied any mischief, saying his team has been inconsistent the entire tournament.

"We are tired," Udovicic said. "I am the coach and I don't know how to solve the problem. They look very tired. This is the most problem."

Despite any possible hidden agendas, the Americans refused to let anything overshadow their accomplishment.

After upsetting world No. 1 Croatia, 7-5, Saturday, they got another strong defensive performance against Germany.

Jeff Powers and Adam Wright led the US with two goals apiece.

But the biggest play of the game came in the final 15 seconds. With the Americans leading, 8-7, Germany's Thomas Schertwitis appeared to score the equalizer following a minor foul.

But referees waved it off, saying Schertwitis had been fouled inside the 5-meter mark and thus should not have been able to take a direct shot at the goal.

In other games, Group A winner Hungary defeated Canada, 12-3, and Spain slipped past Greece, 10-6.

Montenegro and Australia tied, 5-5, which allowed Montenegro to advance to the quarterfinals, and Croatia trounced host China, 16-4.