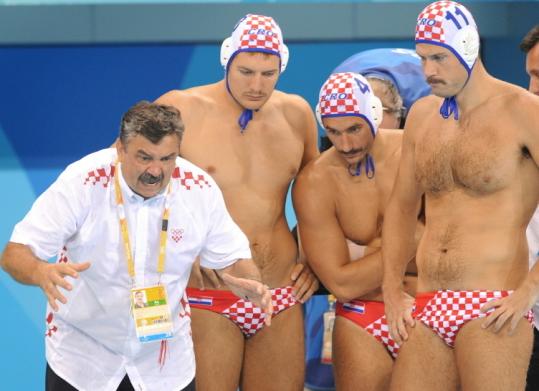 BEIJING - Croatia's Maro Jokovic swiped his finger across his upper lip, pointing out how far he has to go to get his mustache to match those of his teammates.

Given how strong the Croats have looked in the preliminary round of men's water polo, Jokovic has some time to catch up.

"Mine is still growing," Jokovic said. "I need it to grow longer."

If not, Jokovic could be the odd man out atop the medal stand. Croatia, the world's No. 1 team, has dominated its first three matches at Yingdong Natatorium and looked every bit the part of gold medal favorite.

Following the lead of goalkeepers Josip Pavic and Frano Vican, Croatia decided two months ago to grow mustaches while preparing for Beijing. It wasn't an ode to American swimmer Mark Spitz - probably the most famous mustachioed Olympian of all time - and surely had nothing to do with New York Yankees slugger Jason Giambi, whose facial hair gained plenty of attention this summer.

This was about team unity.

And there's no way the Croats are going to shave now.

Croatia has stood out for other reasons, too.

The Croats have won each of their three preliminary games by at least three goals. They opened with an 11-7 victory against Italy and then beat rival Serbia, 11-8.

They were even better yesterday, thumping Germany, 13-5. Damir Buric scored three goals and four others added two each.

Croatia shot 50 percent, scored on every power play, and finished with 8 steals, 6 assists, and 3 blocks.

"Croatia is, at the moment, the favorite for the final," said German coach Hagen Stamm, whose team fell to 1-2.

The Americans had plenty of chances to pull off an upset, but they were 2 of 27 shooting and couldn't score on three of their five power-play opportunities against backup goalkeeper Slobodan Soro. Team captain Tony Azevedo was 0 for 8, including a missed penalty shot.

"I couldn't hit the back of the net," Azevedo said. "After missing the first couple, it seemed like I kept forcing it. It was totally in my head, not taking the time to relax and put it where I needed to put it."

The Americans will try to rebound tomorrow against - guess who? - the Croats.

The match will pit current Croatia coach Ratko Rudic against his former team. Rudic was hired in 2001 to reshape the US team, but was lured back to his native country after the 2004 Olympics.

Rudic was partly the inspiration for the mustaches. He has sported a bushy one for about 40 years and can barely remember what he looks like without it.

"For me, it was very funny seeing them," Rudic said. "They are enjoying it and joking with this. It's a good dose of atmosphere for the team. They said, 'OK, we have two months together and we are watching these same faces each day, so we will change a little bit of the face to change something.' That was the reason."

Rudic was quick to point out that a few players, most notably Jokovic, have a long way to go to get even close to his thickness.

"Maybe they should put some color on it," he said.