Bachman was visiting the ancient Drum Tower with his wife Barbara, who was seriously injured, and a female Chinese tour guide, who also suffered injuries from the attack by the same man, officials said.

Barbara Bachman was transported to a local hospital for emergency treatment. Her injuries are considered life threatening.

The Bachman’s daughter Elisabeth Bachman McCutcheon was with them at the time of the attack, but she was not injured in the attack. She was a member of the 2004 US women’s volleyball team.

Officials from the US Olympic Committee and US Embassy were with the Bachman family at the hospital.

Chinese officials identified the assailant as Tang Yongming, 47, who comes from the eastern city of Hangzhou. Authorities and the USOC said the man jumped to his death from the second floor of the tower after the attack.

China's government news agency, Xinhua, is providing more information about the alleged assailant, Tang, a former meter factory worker with no criminal record. He had lived in Hangzhou, a city in the province of Zhejiang, before coming to Beijing on Aug. 1.

He exhibited no abnormal behavior prior to leaving for Beijing, according to an official from Zhejiang's security bureau. He was divorced with a 21-year-old son who was once sentenced to prison for six months for theft.

Before coming to Beijing, Tang had no fixed job. The news agency also reported that Tang is not known as a petitioner with a grievance against the government.

The alleged attack took place inside the Drum Tower, a 13th century imperial structure just north of the Forbidden City. While the motive remains unclear, U.S. Embassy officials said the attack “appears to be an isolated act with no connection to the Olympics” and they have “no reason to believe that the assailant targeted the victims as American citizens.”

The Bachmans were not wearing apparel that identified them as relatives of members of the U.S. Delegation when the attack took place.

"It is impossible to describe the depth of our sadness and shock in this tragic hour," said U.S. Olympic Committee Chairman Peter Ueberroth. "Our delegation comes to the Games as a family, and when one member of our family suffers a loss, we all grieve with them. Our thoughts, prayers and deepest condolences are with the Bachman and McCutcheon families."

Yesterday afternoon outside the Drum Tower, a popular tourist attraction surrounded by traditional alley-style hutong dwellings, some residents and shopkeepers said they heard that the Chinese man may have gotten into an argument with the American before stabbing him and that he never jumped outside the tower.

Others said they heard about a suicidal jump. Because the alleged attack took place inside the tower, none of the local residents or store owners said they witnessed anything that triggered the incident other than ambulances with sirens arriving around 12:30 p.m.

"When I arrived to work at noon, nothing had happened," said a cleaning lady at a linen store.

Many neighbors declined to discuss anything about what they know or saw, amid the swarm of international media that arrived at the scene within a couple of hours of the alleged incident.

"We know some things but we can't talk," said one resident. Throughout this site, police officers were stationed, as well as neighborhood security volunteers who seemed to be watching closely who was talking to reporters.

One neighbor, who gave only his surname as Zhang, said he is deeply saddened by the attack given that it took place just after China staged a glorious opening ceremony on Friday. He said attacks by Chinese on others are very rare in Beijing.

"In normal life, these kinds of things seldom happen," he said.

Though he had no first-hand knowledge of what happened, Zhang said he heard the attacker jumped to this death, and probably has "psychological problems."

The US men's volleyball team is scheduled to play its first game at 12:30 p.m. (Beijing time) Sunday against Venezuela.

The Associated Press contributed to this report. 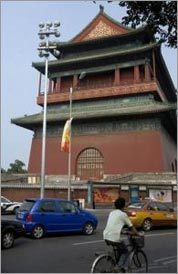 (AP Photo/Alexander F. Yuan) A Chinese man cycles past the Drum Tower in Beijing, China, Saturday, Aug. 9, 2008. Beijing authorities say a Chinese man attacked two American tourists on the opening day of the Olympic Games, killing one of them before committing suicide.