THIS STORY HAS BEEN FORMATTED FOR EASY PRINTING
Olympic notes 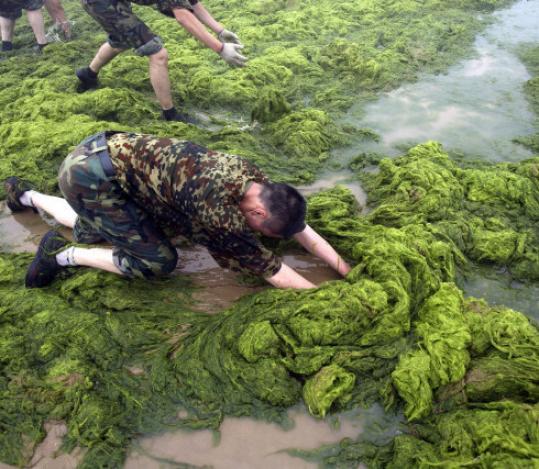 As if earthquake worries, polluted air, and an algae-filled sea weren't enough, the Beijing Olympic organizers may have a Biblical-level challenge on their hands - a plague of locusts buzzing down from Inner Mongolia, where they've already chewed up 5,000 square miles.

"The wind direction is blowing toward Beijing and the locusts may end up in the capital," a Mongolian agricultural official said yesterday.

The city will begin tackling its notorious gray skies a week from Sunday when it takes up to 2 million cars off the road and shuts down factories and industrial sites.

Qingdao, which is hosting the sailing events, already has scooped up 400,000 tons of algae that were strangling a third of the Yellow Sea competition area, which Olympians have dubbed "the fairway" for its lush greenery.

But the locusts, which number up to 70 per square meter, are a different challenge. More than 30,000 exterminators and 100,000 pesticide sprayers have been dispatched to the area, which is 110 miles north of Beijing. Unlike other unwanted visitors, the Chinese government can't keep out the winged insects by denying them visas.

Looks like the idea of holding Olympic swimming trials in temporary pools inside big arenas is here to stay. More than 160,000 spectators turned up at Omaha's Qwest Center for the eight-day event, which used to be held in college pools until USA Swimming shifted to a temp facility in a Long Beach parking lot four years ago. "I don't think we could have done this at any other place at this stage than Omaha," reckoned executive director Chuck Wielgus. "We'd outgrown every natatorium in the country." . . . Michael Phelps's renewed quest for a record eight Olympic gold medals likely will be determined on the second full day of racing with the 400-meter freestyle relay. That's the race that ended his dream early in Athens, where the US team finished third, and the Americans are underdogs again, this time to the French, who've posted a faster time this year than the Americans did when they won the world title last year. This time there'll be no controversy over putting Phelps on the relay, even though he pulled out after the prelims of the 100 freestyle at last week's trials. When Phelps swam 47.92 in Omaha, equaling Garrett Weber-Gale's winning time in the final, he nailed down a spot. "It made the relay an easy choice," said men's coach Eddie Reese. The 800 freestyle relay likely will be the same quartet that won both the Olympic and world titles - Phelps, Ryan Lochte, Klete Keller, and Peter Vanderkaay. Though Lochte scratched from the 200 free final at the trials, he'd posted the fastest time (1:45.61) in the semis. Lochte's inclusion would mean Erik Vendt would have to get faster between now and the Games to get a prelim spot that likely would bring him a gold medal. Both Ricky Berens (1:46.14) and Dave Walters (1:46.64) were faster than Vendt (1:46.95) in the 200 free, but the North Easton native admittedly was focusing on the 1,500. A month's worth of speed work could shave some 10ths . . . Dara Torres did the prudent thing by giving up her spot in the 100 free to Lacey Nymeyer. Torres, the 41-year-old swimming mom, already has a full plate with the 50 free and the two relays she'll be anchoring, and she's only ranked sixth globally in the 100.

Though Morgan Hamm got off with a warning from the US Anti-Doping Agency for taking an approved anti-inflammatory shot at the May nationals without asking for an exemption, it's caused a problem for USA Gymnastics. Hamm was named to the Olympic team based on his combined scores from the nationals and trials and his warning wiped out his May 24 results, which counted for 20 percent of the total. Though the federation could take him off the team, it's likely to let things stand. USADA said Hamm took the drug for a legitimate purpose and he readily took the blame. Without him, the US medal chances undeniably would be weaker - Hamm's one of the squad's top four in four of the six events. His twin, Paul, meanwhile, got the green light last week to resume training, roughly five weeks after having his broken right hand repaired. If he can show competitive readiness by the end of next week, Hamm will keep his place on the team. If not, one of the three alternates - Raj Bhavsar, Alexander Artemev, or David Durante - will step in. "I have been here before; it is very, very difficult," said Bhavsar, who was an extra man in 2004. "You have to dig deep on days you don't want to do this. You dig to the center of your heart."

The US women's eight, which won last year's world rowing regatta, has been shaken up for the Olympics with three new faces - Anna Cummins, Elle Logan (Boothbay Harbor, Maine), and Erin Cafaro. Harvard grad Caryn Davies, the only holdover (besides cox Mary Whipple) from the Athens silver medalists, will stroke, and Cummins will double with Portia McGee in the pair. The men's boat, which features three returning gold medalists in Bryan Volpenhein, Wyatt Allen (Portland, Maine), and Beau Hoopman, will be stroked by Josh Inman . . . Cameron and Tyler Winklevoss may have had the two best consecutive days of their lives last month. On Day 1, the Harvard grads won what's believed to be a hefty cash-and-stock settlement from their federal suit against Facebook founder Mark Zuckerberg, whom the Connecticut twins had accused of stealing their idea. On Day 2, they were named to the Olympic rowing team in the pair after Inman and Matt Schnobrich, who'd won the trials, opted for the eight instead . . . Nice Olympic tuneup last weekend by Massachusetts scullers Elliot Hovey (Manchester-by-the-Sea) and Wes Piermarini (West Brookfield), who won the Double Sculls Challenge Cup at Henley by beating Peter and Thomas Graves, who'd also finished second to them at the US trials.

Sentiment was for status quo

The Fab Five may have moved on, but the US Olympic women's soccer team includes nine Athens gold medalists (including three-time Olympians Kate Markgraf and Christie Rampone) plus a half-dozen members from last year's World Cup squad. "Everyone was expecting a change, but it couldn't be too much of a change," said coach Pia Sundhage. "We still had to rely on the strengths of the US team." Goalie Hope Solo, who was a pariah after ripping then-coach Greg Ryan for benching her in the Cup semifinal loss to Brazil, likely will be the starter at the Games. The Americans, still unbeaten (19-0-1) under Sundhage, blanked Norway and Sweden on the road last week to run their shutout string to five. They'll play the Brazilians in Denver and San Diego next week in their final Olympic tuneups . . . Why did Brazil name superstars Ronaldinho and Robinho to its men's soccer team? Because the Olympics is the only major tournament the five-time World Cup champions haven't won. The Brazilians, who didn't qualify last time, haven't made the medal stand since 1996 . . . USA Diving skewed younger this week when it chose the final eight members of the Olympic team, tapping five teenagers, including 15-year-olds Haley Ishimatsu and Mary Beth Dunnichay on women's synchronized platform. Only Laura Wilkinson, the 2000 platform gold medalist, and Troy Dumais return from the Athens team that won no medals for the first time in 92 years. "We will not be shut out at these Olympic Games," vows team leader Bob Rydze.

Material from Olympic committees, international and domestic sports federations, interviews, and wire services was used in this report; John Powers can be reached at jpowers@globe.com.