THIS STORY HAS BEEN FORMATTED FOR EASY PRINTING
At the Races

A victory for Pletcher to savor 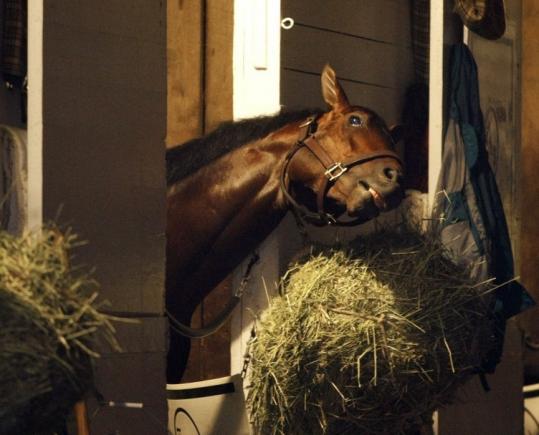 LOUISVILLE, Ky. — In many ways, it was the same as it has been for the past several of Todd Pletcher’s annual business trips to Kentucky, culminating with the festivities on the first Saturday in May.

Same hotel near the airport, a five-minute ride from . Same business the morning after at the track. After all, the Kentucky Derby is the traditional start of the thoroughbred season, not the end.

The storms, which had been in the area for 24 hours and then disappeared at race time on Saturday evening, had returned in force.

For Pletcher, the day after always had been filled with what-ifs, as year after year the grandest prize in horse racing, a win in the Derby, had eluded him.

But yesterday morning was different. There was a sense of contentment, if not satisfaction, as Pletcher finally had a Kentucky Derby winner in his stable — courtesy of Super Saver’s 2 1/2-length victory over hard-charging Ice Box (watch out for the Nick Zito-trained horse in the Belmont next month) and gritty Paddy O’Prado.

Super Saver’s victory ended a much-talked about story line for Pletcher, who is the best trainer in the world, except in the Derby. In the previous nine years, Pletcher’s horses were 0 for 24 in the Derby. Now they are 1 for 28, but it feels so much different.

Pletcher probably deserved his 2 minutes 4.45 seconds (Super Saver’s winning time) of fame by himself, but when Calvin Borel became the first jockey in the Derby’s 136-year history with wins in three of four Runs for the Roses, the glory had to be shared.

“I said earlier in the week that Calvin Borel is a great rider anywhere he goes, but for some reason, at Churchill Downs, he’s even 5 lengths better,’’ said Pletcher. “He’s just figured out Churchill Downs. He knows how to ride this track and gets along with this colt really well.’’

If a long shot had won Saturday, the Derby would have had a good story, and the buildup for the May 15 Preakness would be appropriate. But what the sport needs is a hero — not a 50-1 shot such as Mine That Bird, which won the Derby (ridden by Borel) last year, then faded over the next few months.

Horse racing needs a Triple Crown winner, desperately. It’s been 32 years since Affirmed pulled the feat. Whether Super Saver can carry that burden beyond the Preakness is questionable. Super Saver only jumped into contender status for the Derby when rain was projected, since he already had won a race in the slop, something few other Derby hopefuls had done. He also became a contender because Eskendereya, who looked like a super horse throughout the prep season, injured his left front leg last week and was pulled from the race.

But there is already a feeling in some circles that Ice Box, not Super Saver, could be installed as the morning-line favorite for the Preakness. Not that any of that matters to Pletcher. He has had horses that have won the Belmont. He knows his abilities as a trainer. Now he can go after another goal, winning his first Preakness.

“I’m trying to take my wins and losses in the same way, so like I said before, I’m no better trainer today than I was yesterday,’’ he said. “No better than when I woke up this morning. Won’t be any better tomorrow. We’ll try to keep doing everything the way we have always done it, and hopefully we can keep doing well.

“But you know, it’s really the opportunity that these guys gave me with a special colt, and we were fortunate enough to get it done.’’

Naturally, after the Derby Pletcher was asked if the Preakness would be the next major target.

“We certainly hope so,’’ he said. “Calvin already said he’s going to win the Triple Crown, so I guess we’d better go there.’’