For horses' safety, he thinks outside the hocks 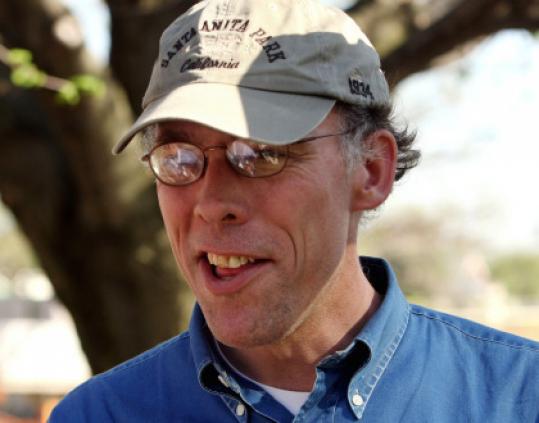 In the wake of tragic, nationally televised horse injuries, thoroughbred racing has been notorious for responding with safety committees. Populated by industry insiders, these coalitions and panels issue guidelines and recommendations that are largely voluntary and almost entirely toothless, because the sport lacks a central authority to implement meaningful change.

Over the past several seasons - especially since undefeated champion Barbaro fractured his right hind leg in the 2006 Preakness Stakes and the filly Eight Belles shattered both front ankles after the 2008 Kentucky Derby - the industry has likewise ramped up its damage control and public awareness.

In the lead-up to Saturday's 135th Kentucky Derby, the National Thoroughbred Racing Association has been vigilant about issuing press releases rife with buzzwords like "integrity," "accreditation," and "standards of excellence." recently unveiled an ambitious 22-point master safety plan that is similarly heavy on politically correct jargon.

It's one thing to talk a good game about preventing catastrophic injuries to racehorses, yet quite another to actually pull it off. But if you sift through the spin to find someone who is actually doing significant, long-term, hands-on work, you'll find Dr. Michael "Mick" Peterson Jr. peering intently at the point of impact, where the fragile, delicate feet of equine athletes strike the ground at 100 times the force of gravity.

A self-described "geek" who knew nothing about the sport a dozen years ago, Peterson invented a biomechanical hoof before expanding his studies to include ground-penetrating radar and particle analysis of racetrack surfaces. The University of Maine professor believes racing can take long-term control of its safety problems by embracing "a culture of data."

Peterson is refreshingly far removed from racing's insular culture. After all, this is a guy with a doctorate in theoretical and applied mechanics. Among other endeavors, Peterson once headed a team that investigated the Columbia space shuttle's disintegration. And when the racing industry earlier this month committed funds to build the first laboratory dedicated to racetrack science, his participation was deemed so crucial that it was announced that the facility would not be based in Kentucky, the country's horse capital, but 1,200 miles away in Peterson's rural hometown of Orono, Maine.

Paucity of data
Peterson, 47, laughs heartily when he pinpoints his entry into the world of horse racing to a "naive question" he asked more than a decade ago.

As a member of the mechanical engineering faculty at Colorado State University, he was helping a colleague with a bone-remodeling study. After it was explained to him how the tests would try to replicate the forces and stresses exerted on the hooves of horses as they hit a dirt racetrack, Peterson said, "OK, so what kind of standards do we have to meet?"

Peterson's query yielded blank stares. Despite centuries of competition, there was no scientific data on the uniformity of dirt horse tracks. Their basic composition - a subsurface base that provides stability and drainage, covered by a cushion of loam, sand, and clay - had never undergone any rigorous study, and the notion of what was considered "safe" was highly subjective and purely anecdotal.

"I remember him asking that," said Wayne McIlwraith, a horse surgeon and director of the Orthopaedic Research Center at Colorado State. "It was a collision of worlds, for sure."

It's long been a given in the thoroughbred industry that when a horse suffers a severe injury, the racing surface will be blamed. Peterson and McIlwraith knew this could logically be the case, but to what degree? Until they had quantitative data, they couldn't determine what role other dynamics, such as genetics, played in the frequency and severity of horse injuries.

Peterson and McIlwraith realized such research would be a difficult sell to a fragmented industry that wants quick solutions on a limited budget. But even after Peterson moved on to Maine in 1999, they continued to chip away at the project, obtaining occasional grants or consulting gigs that fed into what they would come to call the Catastrophic Injury Database.

The only thing Peterson ascertained immediately, from the very first time he set foot on the backstretch of a racetrack, was that he was hooked for good on the sport.

"I came in knowing hardly anything about horses," Peterson said. "I just got lucky. I loved it. Once I'd been at the racetrack for a while, I realized there was no going backward."

Beyond the surface
In the summer of 2003, Peterson had an engineering breakthrough. Although there were numerous "off-the-shelf measuring devices" that functioned as a drop hammer, none of them replicated the speed and load of a racehorse's hoof striking the ground: A hoof doesn't just drop, it also pushes off to launch the animal into its next stride.

This led Peterson to develop his robotic hoof, which in turn led to an important safety discovery. Too much emphasis, Peterson learned, had been placed on the hardness of the racing surface. What was being overlooked was the track's "shear strength," or how much resistance the hoof encounters when it pushes off.

Excessive hardness can cause bone fractures and instant, graphic injuries. But too much shear strength results in soft-tissue damage that takes its toll over time, silently causing wear and tear in the form of tendon and ligament strain.

Several years ago, Peterson was consulting for Fairplex Park in California. He field-tested the track with his biomechanical hoof, then followed up with ground-penetrating radar to get a sub-surface image where he thought there might be a problem. No one had complained and no injuries had occurred, but Peterson said when the track superintendent took his advice and dug up the track, "the base was essentially missing from that area." The track was repaired.

"That's really my vision for the industry," said Peterson. "I want to make incremental improvements before any horses get hurt."

Although prevention is a noble aspiration, both Peterson and McIlwraith acknowledge that it has taken a pair of very high-profile horse injuries - to Barbaro and Eight Belles - to get the industry to make serious commitments to improved horse health.

"As a generalization, the industry is reactionary," said McIlwraith. "There's a lot of tradition and there's a lot of dogma. But people are changing. They're realizing that they can't do things the way they've always been done. I think that clash between racetrack tradition and making decisions based on science is improving."

Personal perspective
It has taken nearly 10 years since their initial experiments at Colorado State, but now the funding is beginning to flow to allow Peterson and McIlwraith to conduct their research on a widespread, national level.

Last year the two shared the $43,000 Elastikon Equine Research Award for their racetrack safety initiatives. This past winter, Peterson was hired by Churchill Downs to establish protocols for performance testing. Two weeks ago, a coalition of racetracks and industry groups came through with money that will get the Racetrack Surfaces Testing Laboratory up and running in Orono. The lab will charge tracks for analysis, but the data will be made available to anyone in the industry.

"Racehorses are almost always going to have injuries," said McIlwraith. "But we want to get that rate down as close to zero as we can get it."

This week Peterson is in Louisville to experience his first Kentucky Derby. He's the solitary figure on the track between the cacophony of morning training and the excitement of the afternoon races, taking his measurements during the break in the action. He's looking forward to watching the Derby not from one of the cushy luxury suites, but from an obscure hideaway on the far turn known as "The Hill," where the maintenance crew parks its heavy equipment.

Butch Lehr is the track superintendent at Churchill, and he's been a member of the maintenance team in one capacity or another since 1967. He could be resentful that the corporation has hired an outsider to oversee his work. Instead, Lehr said he looks forward to seeing how his methods stand up to Peterson's scientific analysis.

"I've got my theory of the way things should be, but that doesn't mean I'm right," said Lehr. "He's got the expertise. What I hear from him makes sense."

Peterson has to look back before making a prediction as to what his research will accomplish in the future.

"There were some days, standing out there on a muddy racetrack in the rain, when I thought, 'I got a degree in mechanical engineering for this?' " Peterson said. "But then I think about five or 10 years down the road. I want the racetrack to be a place where you can take your kid, and if an injury does occur, you can tell them, 'They're doing everything they can.'

"And that will be true. It will be honest. Because by then, we will be doing everything we can to help the horses."