"I was just going to canvas alley and grabbing 50-pound bags of Turface; it's an infield conditioner but we stack them up when it floods to build a dam to keep the water from going down into the Red Sox' batting tunnel. It works just like sandbagging. Honestly, at that time there was absolutely nothing going through my head but, 'Man, I hope it quits raining. I don't know what we're going to do if it doesn't quit raining.' I went to Ohio State and studied turf grass science. I work on grass, I don't know a lot about building dams, but that worked pretty good. What happens here is the field drains, and when the city drains get backed up all the water coming off the field and out of the stands has nowhere to go, so it just starts shooting water back up at us. The dugout itself was flooded, but the dam we built held the water out of the tunnel underneath. I could see some players down there. The worst I saw it was during the Futures at Fenway, we didn't get the dam built in time and it did flood the tunnels. It's just an old ballpark and an old city. I was soaked through and through all night." 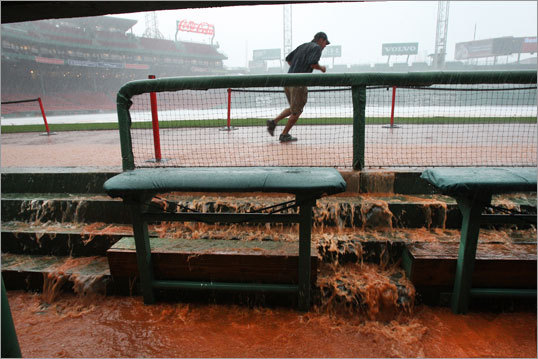