"I was thinking what a great minor league ballpark this is for families. You know, if I could pull off a good Youkilis stance, I would, but I don't think anybody could possibly give that justice. This is during the "National Game'' march, which John Philip Sousa wrote in the mid-1920s for the 50th anniversary of the National League. Which goes to show you how long baseball has been the national game. Instead of cymbal crashes, he substituted the crack of the bat. When we did the Red Sox record album last year, we actually went down to the batting cage and recorded Ortiz providing us with the crack of the bat. A conductor is closest to a player/coach position. Everybody says, 'You've got great players, what do you need a conductor for?' Well that's like saying, 'You've got great players on the Sox, what do you need a manager for?' You need somebody to figure out what the focus of the team is going to be. How the team is going to work in unison. Get the signals together and keep everyone going in the same direction." 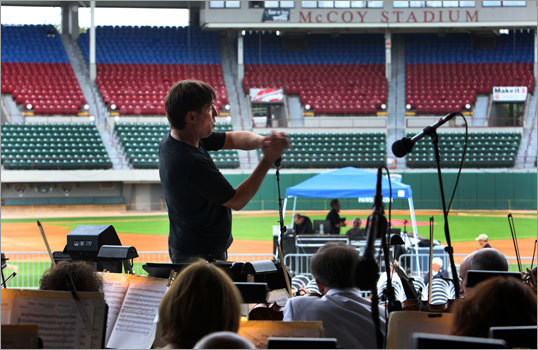