JORDAN ANGELI of the Breakers, stealing the ball from Philadelphia's LIANNE SANDERSON to set up Boston's goal in a 2-1 loss in the WPS semifinals, at Soldiers Field Soccer Stadium in Allston, Sept. 23, 2010. Angeli:

"It was controversial. I was cutting back and Sanderson got the ball and all I kept thinking was 'separate the ball.' I think I got a little bit of ball and a little bit of her, and we both went down in a crumble. All I could think of was 'somebody pick it up, somebody score a goal.' Lucky enough, we found [Lauren] Cheney up top and she chipped it in. I've got a good pose going. It's kind of like a yoga pose. I was thinking of my track days, going over hurdles. I was not good. I might have gotten a little more body than ball, but all's fair in love and soccer.'' Sanderson: 'It looks like I'm getting taken out. It was a foul and then they went straight down the other end and scored. I had the ball and got kicked in the ankle. Instinctively, I thought, that's a foul. Without using explicit words, I am very annoyed in that picture. I don't need to use bad words. It's not a flattering picture. I didn't say anything to her. I didn't have to. Anyone watching would know that's a foul. I'm sure she didn't mean it. It's just unfortunate." 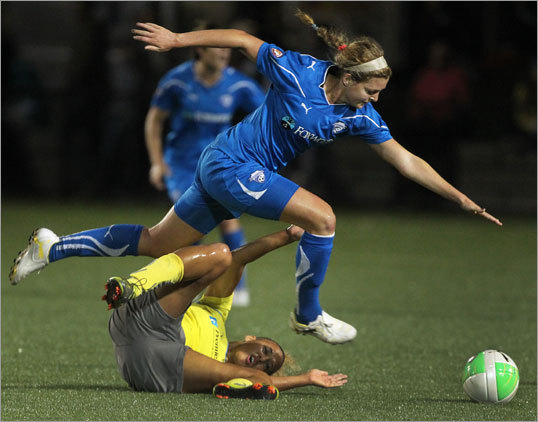