"Well, it all started in the Friday night meeting with the players. The captains speak to the team and then the other players, if they have something to say, can talk. [Offensive lineman] Bryan Davis was telling us that before he left to go to school, he gave his mom a baseball bat and said, 'If anyone tries to break into the house, use the baseball bat and swing.' He related it to how on Saturday we're playing a game-the last home game and senior day against the [North Carolina State] Wolfpack. He said, 'You know the wolves are going to come into our house and attack in packs and what were we going to do to keep them out?' He had that baseball bat and he said, 'Seniors, you better go out swinging,' and he gave me the bat. So I just ran out on the field with the bat and we did come out swinging, so I guess that's our new little bat now. I want to say it's a Louisville Slugger ... Oh, and that Mama's Boy on the towel, that's because I grew up with my mom[in Morristown, N.J.], who was a single mother, so I' m not afraid to say I am a mama's boy." 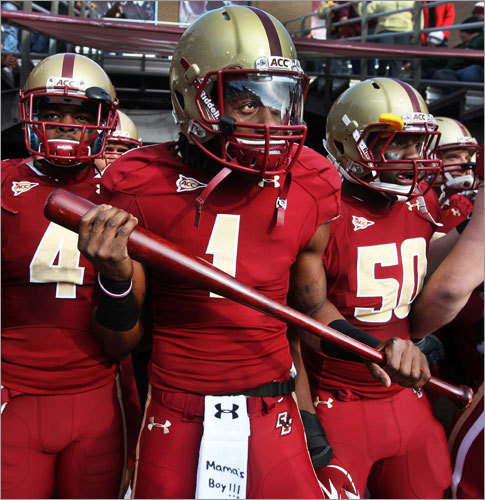