DAVE MAIMARON, Duxbury High School coach, getting doused with ice water by junior linebacker RON KOSHAREK after the team concluded its second consecutive undefeated season with a 35-0 victory over Tewksbury in the Division 2 Super Bowl, at Gillette Stadium in Foxborough, Dec. 3, 2011.

Maimaron -- "Yeah, I knewit was coming. I brought an extra set of clothes just in case. I took off my headset and gave someone my wallet and my phone. The water was cold and wet. I'mgetting used to it, two years in a row. The senior class won us a lot of football games and we are going to miss them. It's been awesome."

Kosharek -- "To be honest, words can't describe how happy I was. Going undefeated two seasons in a row is indescribable. I just want to give credit to the seniors for a tremendous season and our coaching staff, who put in more hours, I think, than some college programs. It was a direct hit on him. It was freezing. I can't imagine how he felt when he got showered. I was thinking, 'Let's go home and have a good time.'" 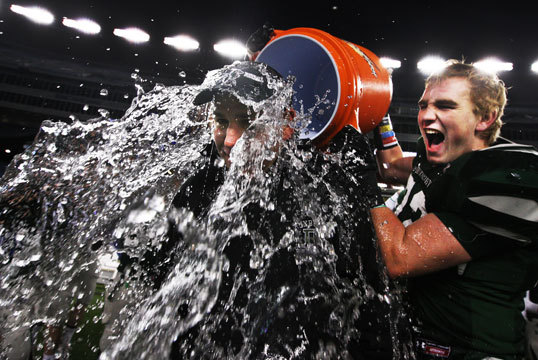