Smith: "Nick Foligno had hit [Zdeno] Chara from behind and he got a penalty on it. Lucic was coming in, so I just stepped in between. He went for my face and I was startled. Someone puts their hand in your face, you want it out of there. It looks like he's got my nose there. He grabbed it. I've broken it a couple of times. I said, "Let go,' and I thought for a second we were going to fight but it got broken up. It's good to see that, even though it's the last game of preseason, it's still physical and people are making a last push for the regular season. That stuff is expected. No hard feelings." Lucic: "Obviously, I didn't like the hit with Zdeno. He got hit from behind and a scrum ensued. He grabbed me and I really didn't want to be touched. I pushed him off and he shoved me back. We kind of got paired off and I shoved him in the face. Gave him a punch in the chops to soften him up. Iwas ready for anything. Ready for a fight, getting into the battle. It was a heat-of-the-moment thing but it never really ensued to what it could have been." 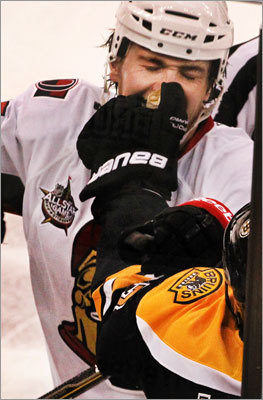