They ride to advocate for cyclists everywhere 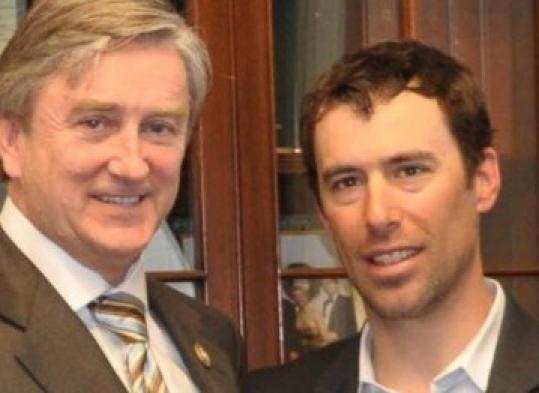 The trek from Boston to Washington, D.C., is never easy, whether traveling by train, plane, or automobile. Imagine the ride on a bike.

Earlier this month, bicycle racer Tim Johnson and a cadre of other Boston-area cyclists did just that, to raise awareness of the economic benefits of pedal power.

“It was really a different ride,’’ said Johnson, a Middleton native and resident of Beverly who races professionally for Team CyclocrossWorld/Cannondale.

“It wasn’t like riding up the quiet roads of Maine. We did a ride that went right through the heart of the East Coast. And that was to show that cycling is transportation at its core.’’

Johnson teamed with Lexington’s Richard Fries, a development advisor for the Bikes Belong Coalition, and six other riders to pedal almost 500 miles through some of the most dense metropolitan areas along the Eastern seaboard — including Providence, Hartford, New York City, Philadelphia, and Baltimore — on their way to the National Bike Summit in the capital.

“I had the chance to go to the summit last year, and was totally blown away that there were literally thousands of people trying to make riding a bike a safer thing to do, or an easier thing to do, for people of all walks of life,’’ he said. “As a professional bike racer, you just get caught up in your training and where you’re going, and you’ve always got to get ready for the next event.

“It’s really easy to lose touch with the bigger reality, and that’s what I saw in DC last year. I saw a lot of people working for the sport, and I felt like I owed cycling something, and wanted to try and help.’’

Johnson has worn the red, white, and blue jersey of the United States cyclocross team in numerous world championship races overseas. But back home, he admits, he’s frustrated by the lack of traction that the bicycle has as a legitimate mode of transport.

So the 33-year-old Johnson took matters into his own hands. More than 130 riders participated at some point during Johnson’s Ride on Washington from March 4 to 8, and the fund-raiser collected more than $30,000 for Bikes Belong, a Boulder, Colo.-based nonprofit.

“The idea came while I was on a training ride, getting ready for the world championships,’’ said Johnson. “I thought, I’m going to go to the summit anyway, I’ll be in my off-season, I still need to ride my bike, and it’s March, one of the toughest months to get out of the house and go anyplace. So I just figured I’d ride there.’’

Launched in 1999, Bikes Belong (bikesbelong.org) is a national coalition of bicycle retailers and suppliers working through advocacy “to put more people on bikes more often.’’ The group says it turns every donated dollar into $1,800 in government funding for cycling-related initiatives, including on-the-ground projects both local, such as the Boston-based Livable Streets (livablestreets.info) and nationwide, such as the National Center for Safe Routes to School (saferoutesinfo.org).

“Safe Routes to School helps educate everybody in the schools, from parents to child, on how to ride to and from school safely, identifying the safe way to go, crossing guards, signage, helmets, all those things,’’ said Johnson. “That’s a federally funded program, but there are a lot of states that don’t even access the money, but also towns and school systems that don’t access it. That’s what Bikes Belong does.’’

According to Fries, of Bikes Belong, cyclists need to focus their own fund-raising energies on their sport of choice.

“Bike riders have raised millions, if not billions, to fight everything from cancer to diabetes to AIDS, but cyclists need to realize that their own government funding for bike facilities is in real danger of being eliminated,’’ said Fries in a press release.

“We want to raise funds and awareness to continue the development of cycling facilities in America. Every study confirms that to be the most cost-effective way to improve our public health, our environment, and our economy.’’

After arriving in Washington, Johnson met with local legislators, including US Senators John Kerry and Scott Brown and US Representative John Tierney.

“The point of this whole summit is keeping cycling on the minds of the people who make decisions about where money goes and why,’’ he said. “Federal spending is under attack, but cycling is incredibly far-reaching, and the data support that when a city or town is bike-friendly, they find all these benefits. Right now, everyone is so focused on money, but a cycling-friendly city or town also benefits a great deal economically.’’

“Three of the biggest threats to our country are obesity, climate change, and shrinking energy supplies,’’ said Johnson. “Bikes are part of the solution to all three of those problems.’’

Brion O’Connor can be reached at brionoc@verizon.net.