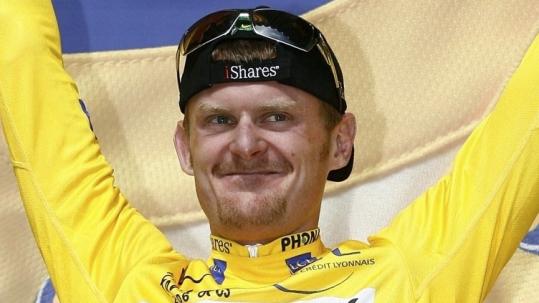 Floyd Landis said his introduction to performance enhancers came in 2002, his first year on the US Postal Service team. (2006 File/Stefano Rellandini/Reuters)
By Shira Springer Globe Staff / May 21, 2010

“Floyd lost his credibility a long time ago.’’

Before yesterday’s fifth stage of the Tour of California (in which he crashed), Armstrong held a press conference, denying the allegations and questioning the character and motivation of Landis.

“With regards to the specific allegations, the specific claims, they’re not even worth getting into. I’m not going to waste your time or my time.’’

The Landis allegations come in the wake of revelations about Canadian doctor Anthony Galea and his treatment of US athletes in several cities across the country, from Boston to San Francisco. Galea has been charged with smuggling and illegally providing human growth hormone. In recent years, baseball, football, cycling, and track and field have all been tainted to a great degree by steroid scandals.

“Galea yesterday, Armstrong today, what’s tomorrow?’’ said Dr. Gary Wadler, an expert in drug use in sports and chairman of the World Anti-Doping Agency’s Prohibited List and Methods Subcommittee. “We can look backwards and use that as a guide as we look forwards. The problem is the abuse of advances in science by people who are ethically challenged.’’

In the e-mails and an interview with ESPN, Floyd detailed his use of performance-enhancing drugs and implicated other American riders, particularly Armstrong. Landis claimed he was introduced to steroid patches, blood doping, and HGH by Armstrong’s longtime coach Johan Bruyneel. Landis said the introduction took place in 2002, the first year he competed on the US Postal Service team with Armstrong.

Landis said he had lengthy discussions about performance-enhancing drug use during training rides when Armstrong “explained to me the evolution of EPO [synthetic red blood cell booster Erythropoietin] testing and how transfusions were now necessary due to the inconvenience of the new test.’’

Additionally, Landis alleged that Armstrong stored bags of blood in his Girona, Spain, apartment for later use. Landis also said Phonak team owner Andy Rihs helped him continue doping when he left the US Postal team for Switzerland-based Phonak in 2005.

In a statement, Rihs called Landis’s accusations “lies’’ and a “last, tragic attempt’’ to regain public attention. But from 2004-06, Phonak riders were embroiled in several doping scandals, including one that involved Marblehead’s Tyler Hamilton, who received a two-year suspension.

Standing up for himself and others targeted by Landis, Armstrong said, “We categorically deny that we were at all in any way involved in teaching anybody — forget about Floyd — teaching anybody how to do that.’’

Despite being accused several times of using performance-enhancing substances and rigorously tested, no Armstrong results have ever come back positive for doping.

Armstrong questioned why someone interested in clearing his conscience would inform other riders’ sponsors and race organizers.

In his ESPN interview and e-mails, Landis expressed a desire to expose current anti-doping efforts as “a charade,’’ to help clean up the sport, and to save young riders from the dilemma he faced.

“I don’t feel guilty at all about having doped,’’ Landis told ESPN. “I did what I did because that’s what we [cyclists] did and it was a choice I had to make after 10 years or 12 years of hard work to get there, and that was a decision I had to make to make the next step.

“My choices were, do it and see if I can win, or don’t do it and I tell people I just don’t want to do that, and I decided to do it.’’

Landis added, “I take responsibility for all the stuff I did. No one gave me something and said, ‘Don’t ask what this is, just take it.’ I would never have done that. The things I took, I knew what they were, and I spent the time researching what the risks were, and the decisions I made were mine. The whole entire process of doping in the entire sport and the evolution of it all wasn’t my fault, but when it came down to it, me being there, I made the decision to do it.’’

Landis’s admission comes after he unsuccessfully fought to clear his name in the doping case that cost him his 2006 Tour de France title. But he still disputes his positive test for synthetic testosterone in 2006, claiming the result was inaccurate.

After Stage 17 of the 2006 Tour de France, Landis tested positive for high testosterone levels. Facing prosecution from the US Anti-Doping Agency later that year, it was Landis who said, “I have nothing to hide.’’

Under oath at an arbitration hearing in May 2007, he denied taking any performance-enhancing substances at any time in his cycling career. The arbitration panel ruled against him, stripping the cyclist of his Tour de France title and imposing a two-year ban.

Given Landis’s legal history, it’s easy to understand the reaction of International Cycling Union president Pat McQuaid, who called the allegations against Armstrong and others “scandalous and mischievous.’’

“These guys coming out now with things like this from the past is only damaging the sport,’’ said McQuaid. “If they’ve any love for the sport, they wouldn’t do it.

“An impartial investigation is a fundamental right, as Mr. Landis will understand, having contested, for two years, the evidence of his breach of the anti-doping rules in 2006.’’

All signs indicate there will be a thorough investigation into Landis’s claims by anti-doping agencies. But given the lapse of time, the lack of physical evidence, and the absence of documentation, it may be difficult to reach any definitive conclusions.

“WADA is aware of the serious allegations made by Mr. Landis,’’ said WADA president John Fahey in a statement. “We are very interested in learning more about this matter and we will liaise with the United States Anti-Doping Agency and any other authority with appropriate jurisdiction to get to the heart of the issues raised. WADA looks forward to these further investigations and inquiries by those responsible.’’

Fahey added that the WADA encourages people who know of “banned practices’’ to come forward.

While doctors and scientists are making great strides with anti-doping measures, an athlete’s confession of guilt remains a powerful statement. And, Landis hopes, a strong blow against doping practices.

Meanwhile, Armstrong focused on the tragic figure Landis has become.

“It’s very sad,’’ said Armstrong. “At one point or another, all of us implicated have cared about Floyd. That’s one thing we all shared in common.

“We all gave ladders to Floyd at some point in his life when he dug himself a hole. People aren’t throwing him ladders anymore.’’

Material from the Associated Press and other news outlets was used in this report.