THIS STORY HAS BEEN FORMATTED FOR EASY PRINTING
NASCAR AT NHMS 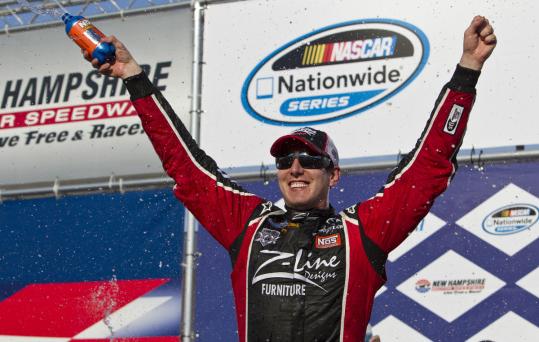 LOUDON, N.H. - Too many times, Kyle Busch has been in a nasty mood when he’s put New Hampshire Motor Speedway in his rearview mirror. He’s qualified poorly for some races, finished poorly in others, and had his share of costly misfortune.

Now, leading the NASCAR Sprint Cup Series points standings for the third time this season, Busch sure would like to leave the Granite State in a better frame of mind and in the same lofty points position. That would be a first this year: Both times Busch has led the standings, he’s had a disappointing outing the very next race and lost his lead.

“[NHMS is] definitely one of those places where sometimes I’m good and sometimes I’m not, but certainly hoping for better things,’’ said Busch, who has one win and four top-five finishes in 12 Loudon appearances. “It’s great to be the points leader and we’d love to be able to keep that roll.’’

Busch will certainly have both eyes on the track when he fires up his No. 18 for today’s Lenox Industrial Tools 301, but his thoughts have also been on positioning himself for the Chase for the Sprint Cup championship. Counting this afternoon’s race, there are eight remaining before the Chase field is finalized. As the points leader with three victories, Busch’s spot in the Chase is all but guaranteed. He’d like to come back to New Hampshire in September equally confident about his championship chances.

With 22 Sprint Cup victories in his career (and now 100 among NASCAR’s three main series after his Nationwide win yesterday), he’s piled up enough credentials to be a title contender. Winning and being consistent before the Chase, though, is one thing. Doing it during the 10-race competition to determine NASCAR’s champion is another.

Busch knows. He arrived in Loudon at the beginning of the 2008 Chase with the points lead, thanks to eight victories in the circuit’s first 22 races. But he encountered an equipment issue in the first Chase race and finished 34th. He ran into more equipment problems the next two races as well, burying his Chase hopes.

“Things like that just seemed to relegate us to finishes that we hadn’t seen all year that we didn’t want to have happen at that moment, but it did,’’ said Busch, who will start 19th today. “Certainly we hope we can have better success.’’

The 26-year-old from Las Vegas - his older brother, Kurt, drives the No. 22 Dodge - reclaimed the points lead with his third win of the season at last week’s race in Kentucky. He’ll try to do better this weekend than he did the first two times he moved into first place. After taking the lead with a second-place finish in Phoenix, he finished 38th (in Las Vegas, no less) to drop to 14th. He also finished 16th at Texas Motor Speedway after taking the points lead the week before.

Can he win his first points title?

“That’s the next challenge,’’ Busch said. “We’re up for it. I feel like this is the best opportunity we’ve had in the past few years.’’

Said Jimmie Johnson, who has won a record five consecutive points championships: “Kyle won last week, so he’s probably at the top of the mind for a lot of people. He’s moved up in the points and has had some good races, but I still haven’t seen a dominant car or driver out there this year.’’

The top 10 in the points standings following the Sept. 10 race in Richmond automatically qualify for the Chase, while the final two drivers are wild-card choices, depending on points and victories. Among the big names currently outside the top 10 include Tony Stewart (11th) and Mark Martin (19th).

Unlike years past, the second race at Loudon will not be the first of 10 Chase races. Chicago bats leadoff this year, with the teams heading to New Hampshire for the second race, on Sept. 25.

Dale Earnhardt Jr., who hasn’t made the Chase field the past two years, is eighth in the standings, looking to end a 111-race winless streak. A victory would certainly help his cause.

“If I could win a race, I’d win a race,’’ said Earnhardt, who has two seconds this year, but has gone 21-41-19-30 the past four races. “The best thing we can do is stay positive. We run good at New Hampshire. We have been kind of eyeing this weekend. We wanted to come in here with a lot of confidence that we belong in the Chase.’’

Earnhardt will start 27th on a track where he’s never won.

Stewart will be on the outside of Row 1, starting second behind pole-sitter and fellow Stewart-Haas Racing driver Ryan Newman. Stewart, who began his NASCAR career in 1999, has won at least one race every year and competed in every Chase. He’s on the outside right now, still winless.

“We’re not where we want to be yet,’’ said Stewart. “Try to get as many points as we can and hope we can get in [the Chase] on merit of points and not have to rely on the wild card.’’

Michael Whitmer can be reached at mwhitmer@globe.com.