An IndyCar date is made official 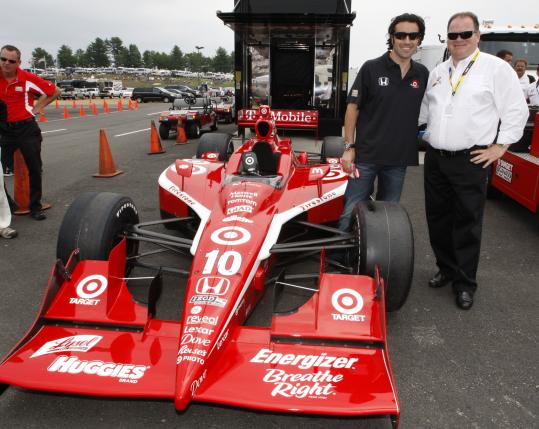 LOUDON, N.H. — The crowd at New Hampshire Motor Speedway for yesterday’s Lenox Industrial Tools 301 NASCAR Sprint Cup race were treated to a glimpse of what the future holds for the 1.058-mile oval when two-time Indianapolis 500 winner Dario Franchitti whipped the fans into a frenzy with three hot laps in his sleek red No. 10 Indy car, fielded by Target Ganassi Racing.

Franchitti zipped around the track in 26.6 seconds — more than two seconds faster than the pole-winning lap Juan Pablo Montoya did in his stock car at NHMS — “without even trying,’’ said one IndyCar Series official.

It was a glimpse into what track officials dubbed “a new breed of speed,’’ after announcing yesterday that NHMS would add an IndyCar Series date July 31, 2011 that will be sandwiched between its lucrative Sprint Cup dates in June and September. It marks a return of open-wheel racing to NHMS after a 12-year absence.

“As an Indiana native and a fan of open-wheel racing,’’ said Jerry Gappens, NHMS executive vice president and general manager, “I strongly believe the people of New Hampshire will embrace this new breed of speed much like they do NASCAR.’’

Gappens and track owner Bruton Smith, chairman of , which hosts IndyCar Series events at Texas Motor Speedway, Kentucky Motor Speedway, and Infineon Raceway in Sonoma, Calif., were joined in the announcement by Franchitti and Randy Bernard, IndyCar Series chief executive officer. Bernard took over March 1 and has expanded IndyCar’s 17-race schedule to include dates at Baltimore and NHMS.

“We will promote this event nationally,’’ vowed Smith. “We’re going to promote the dickens out of this. We already have a big IndyCar event in Kentucky, and we’ve been able to draw large crowds to that.’’

When Smith purchased NHMS from Bob Bahre for $340 million in 2008, there was fear among race fans in the region Smith would strip the track of its Cup dates. With the acquisition of an IndyCar date, those concerns have been raised anew when Smith intimated he might take such action if a dispute with Loudon police chief Bob Fiske about fire and police protection for the track’s two Cup weekends can’t be resolved.

“I’ve always been an optimist, and when you have a lot of negativity here, we don’t like it,’’ Smith said at yesterday’s announcement, which was also attended by New Hampshire Governor John Lynch. “You can’t do this alone. You have to have the blessings of the city, county, and state to draw these huge crowds. It takes cooperation.’’

Lynch pledged the state’s continuing cooperation, stopping short of saying he would intervene in Smith’s issues with local police.

“I said to Bruton, I want New Hampshire to be his favorite venue for racing across the country, and as governor I’ll do everything I can to make it happen,’’ Lynch said. “Preparing a race like this, with 100,000 people, is a huge logistical challenge.

“I’ll continue to do what needs to be done to facilitate this type of event continuing in the future.’’

Bernard said he was compelled to bring the IndyCar series back to New Hampshire in an attempt to strike a balance between road course and short-track oval venues while branching out to new markets.

“There’s a great fan base here,’’ he said. “There was a void in the Northeast, and being so close to Boston, the 10th largest market in the United States, we really wanted to try and reach out and bring it to as many fans as we can.’’